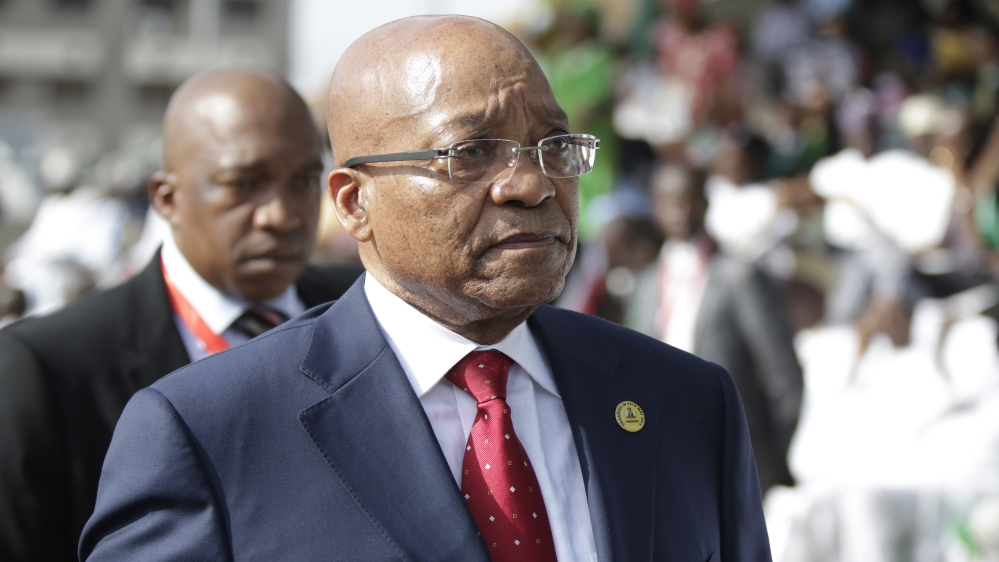 It’s been a presidency characterised by indecision and incompetence, critics say.

But earlier this month, the South African President Jacob Zuma did the unthinkable. Finance Minister Nhlanhla Nene, appointed only 18 months ago, was suddenly fired and replaced by an unknown lawmaker, David Des van Rooyen.

The move shocked the country and the markets responded with its own brand of condemnation. The South African currency went into free-fall, unleashing further criticism of the president. But it didn’t end there. Three days later, Zuma performed an about-turn on his dismissal of Nene and replaced van Rooyen with former Finance Minister Pravin Gordhan, who served in the portfolio between 2009-2014.

Two weeks later and the presidency insists Nene was removed as finance minister in order to further his candidacy for a position in the newly minted Brics bank. Critics, however, remain sceptical. Speculation is rife that the respected minister was booted for pulling the brakes on irresponsible spending by stalling a nuclear deal with Russia, and refusing to purchase new aircraft for the perennially dysfunctional South African Airways.

South Africa’s economy has taken a beating over the past decade. At least 25 percent of the nation remains unemployed and the economy grew by 1.4 percent in 2014.

In the first week of December, credit rating agency Fitch said rising government debt, weak economic growth, and lowered business confidence had pushed the country to one level below “junk” status. Fitch also predicted the economy is likely to grow by a paltry 1.7 percent in 2016.

Al Jazeera talked to Kgalema Mothlanthe, former president of South Africa, about the developments of the last two weeks and why South Africans must demand an explanation.

Al Jazeera: There has been a lot of frustration over the past 10 days in the country after the firing of the finance minister and then the rehiring of the former minister. What do you make off all that has happened?

Kgalema Mothlante: Well, these are decisions that government took, and government changed
the decisions. So, until they explain the rationale behind all of these actions, it’s difficult to read them. But going on the reaction and response of the markets and civil society, its not much that one can rely on. You need to get the rationale from the decision-makers.

Al Jazeera: There have been many calls for President Jacob Zuma’s removal from office on the basis of these decisions. Is this a warranted response?

Mothlante: All of this has happened so quickly, it leaves you completely stunned as to what to make of it. I suppose we will have to wait and see as to how it all pans out. I have read it in the newspapers that some people are saying they will continue with the demonstrations in the coming year, but we can only wait and see.

Al Jazeera: In terms of the call for Zuma’s removal, there is a lot of talk again of the ANC discussing this. Is this true?

Mothlante: I am not in the leadership structures of the ANC. I interact with the part at branch level, and certainly at the branch level this has not been discussed.

Al Jazeera: As someone who was president of the country, how big a deal is it to remove your finance minister?

Mothlante: So in any administration the position of finance minister is crucial, because they are responsible for managing the fiscal affairs, the overall budget. Under normal circumstances, treasury has to be stable, in fact, under normal circumstances, every administration tries to keep treasury as stable as possible. The reaction from all quarters is indicative of how dramatic all of this was. This is why I am saying it leaves people stunned. It’s important to get what the rationale was all about.

Al Jazeera: Are we likely to get that explanation? Is it warranted for South Africans to demand it?

Yes, it is important. You saw [last week] the ANC and COSATU said they received an explanation, and I am sure at some point, they will explain that with all of us.

Al Jazeera: Would you also say that people within ANC itself were surprised by Zuma’s decision to replace the finance minister?

Yes, of course. Except those who were taken into confidence. I am a member of the ANC myself and I was surprised.

Al Jazeera: Is the ANC in trouble? There is a lot of frustration among South African youth over the progress of transformation in the country. You previously said yourself the ANC is not in touch
with young South Africans?

The #FeesMustFall movement and the issues its raised were not anticipated. When you are in touch and you have the finger on the pulse of communities and sections of the population. You are able to provide the leadership in a manner that channel these energies correctly and so on. But if service delivery protests happen – led by ANC members in many instances – without the opportunity to be to channel these energies – then you see these things degenerate into destructive protests and so on. That kind of objective and empirical evidence [that has led me to say that].

Do you think this will come to haunt the ANC in the local elections next year?

Well, all of these factors play a role in how parties perform and as an ANC member I know that when the ANC has been in bad shape in the past, it has shown resilience, an ability to admit its weaknesses and go back to the people and do direct voter contact. And that way, the ANC has always been able to win elections.

But of course the difference is that next year the elections are local government elections and it’s based on constituency-based electoral system. Unlike provincial and national elections, which are only based on proportional representation. That means different dynamics, because in each ward, the community knows exactly what it wants and also has a sense of who is best placed to provide better services because its constituencies, its not the overall prestige of the organisation you represent. That’s why you have had instances of independent candidates winning certain wards.

There is a lot of a pessimism – a lot of talk of South Africa losing its way in the media. Is this the case?

The media is really important because they ventilate issues that the general public may not be aware off. Of course, in appreciation of media freedom, they are the ones who must find well-informed commentators – be it social or political – not only to inform but also to educate the general population. Some things they will get right, others they will get wrong. The essence of democracy is precisely that you get different readings and opinions on the developments.

Is the media more in touch with South Africans than the ANC?

Well, the ANC is not structured to articulate and ventilate general experiences and views of people. The media is meant to play that role. You have to be inside the ANC to know, through the internal structures, what are the concerns and how people read the issues and how issues are raised. The ANC won’t be always ventilating in the public domain.

Do the mechanisms still exist in the ANC for difficult issues to be raised? Or have the spaces for criticism been suppressed in the ANC of today?

Certainly, there are many people in various structures of the ANC are free to express their opinions and views.

Where is South Africa headed? The economy is in poor shape, the mining sector is shedding jobs. Are we staring down a barrel at this point?

It’s our country. It’s our economy. We are affected by all of this. Each one of us has to try and do whatever is possible to address the economic challenges. But primarily, the overall mobilisation has got to be coordinated at government level. I am not in government at the moment.

Do you think the economy will improve? There is a lot of frustation on the street. If you compare South Africa to some of our African neighbours, there seems to be a problem on our side.

It’s all relative. You can do a comparison and of course the starting points are quite different. I prefer that we look at ourselves as South Africans first – as to whether we are growing the economy at the pace that matches the new entrance into the labour market each year, and that we are able to address the problem of unemployed young people, joblessness, poverty, inequality. That is how we measure if we are doing well or not. Rather than to compare ourselves to any other sister country on the continent, in terms of growing at 6 percent or 1.4 percent.