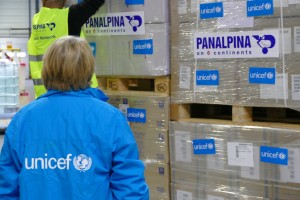 Panalpina flies UNICEF relief to Burundi[/caption] For the third consecutive year, UNICEF and Panalpina  (PWTN:SW) have joined forces to fly much-needed relief goods to an African country where a recurring crisis is taking a heavy toll on society and its weakest members: children. Violence and a shortage of essential drugs pose major risks to their health. In the morning hours on Friday, a Panalpina chartered cargo aircraft landed in Burundi with 70 tons of primary medical care goods on board. 70 tons of primary medical care goods such as antibiotics, analgesics, infusion sets and hospital equipment, provided by UNICEF, arrived in Burundi’s capital Bujumbura on Friday morning on a flight chartered and donated by Panalpina. The company’s Charter Network had organized the relief flight which left Europe the night before. The vital goods will be distributed to Burundi’s health centers which are the first place to go to for medical assistance. “These relief goods can save the lives of thousands of children,” says Elsbeth Mueller, executive director of the Swiss committee for UNICEF. “On behalf of UNICEF, I deeply thank Panalpina for their help.” Burundi has known cycles of recurring violence since its independence, plunged into crisis again in April 2015. The current crisis has so far left more than 200 people dead, with more than 200,000 Burundians crossing borders to seek safe shelter in neighboring countries. Nearly one child out of ten dies before age five. Easily preventable and treatable diseases including pneumonia, diarrhea and malaria are often responsible for these tragic deaths. The current crisis has led to an acute shortage of medication and hospital equipment, and a timely supply of essential drugs for quick treatment is therefore critical to improve child health and survival in Burundi. “This is the third time that Panalpina is partnering with UNICEF to address a crisis in Africa. And again we hope that our contribution will bring some respite to those who are less fortunate than us, especially the many affected children in Burundi,” says Panalpina’s CEO Peter Ulber. Last year, Panalpina supported the fight against Ebola by flying life-saving humanitarian aid to Sierra Leone . In 2013, Panalpina’s first relief flight for UNICEF brought desperately needed goods to the Central African Republic . *APO]]>