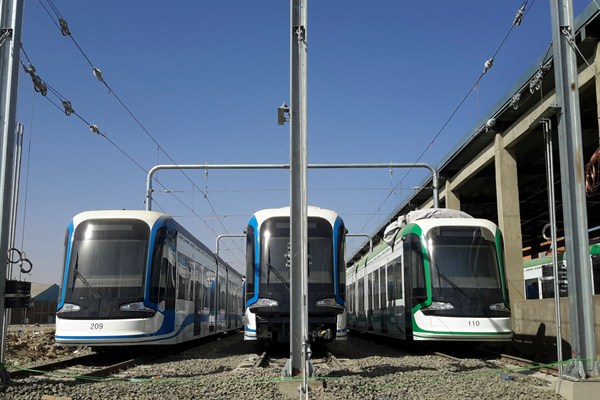 Trams recently brought to Ethiopia from China for the Addis Ababa Light Rail, Addis Ababa, Ethiopia, March 8, 2015 (AP photo).[/caption] Across Africa, there is renewed interest in strengthening infrastructure. In November, the African Development Bank held its “first-ever Programme for Infrastructure Development in Africa Week” in Abidjan, the economic capital of Cote d’Ivoire. The conference emphasized infrastructure, especially transportation and communications, on the continent. Infrastructure development is important not just to economies, but also to politics. In Africa’s two most populous countries, Nigeria and Ethiopia, the politics of infrastructure look very different, but the stakes are equally high for ruling parties. In Nigeria, questions of infrastructure relate to core dilemmas in Nigerian politics and policy. Since returning to civilian rule in 1999, Nigeria has often experienced rapid economic growth, thanks in large part to oil exports. Despite a rising middle class in the country, however, overall growth rates of 6 percent and higher have not dramatically reduced poverty or created sufficient jobs for the country’s 178 million people. During the presidential election last March, then-President Goodluck Jonathan’s People’s Democratic Party found itself pressed to demonstrate how its 16 years in power had benefited ordinary Nigerians. When the ruling party lost, it was in part due to widespread resentment of its economic management. The new administration of President Muhammadu Buhari entered office amid economic crisis due to the steep drop in global oil prices, which began long before the election. Buhari initially enjoyed goodwill because of his promises to fight corruption and eliminate widespread government mismanagement. But when he took more than five months to assemble a Cabinet, concerns focused on the overall pace of his administration, and especially on the absence of an economic team. Unemployment, according to official figures, is rising. During the campaign, Buhari’s party, the All Progressives Congress (APC), suggested that once in power, it would direct the government to print money in order to finance massive, job-creating infrastructure projects. That policy may or may not be implemented, but Buhari’s recently assembled APC Cabinet emphasizes infrastructure, in the person of Babatunde Fashola. A former governor of Lagos, Nigeria’s most populous state and Africa’s most populous city, Fashola now has the mega-portfolio of the Ministry of Power, Works, and Housing. During his tenure in Lagos, Fashola racked up many infrastructure achievements, but with significant cost to ordinary people, as slums were destroyed to make room for roads, new housing projects and light rail.

Infrastructure remains key to growth, but economic reality may call for different policies in both Nigeria and Ethiopia.

Fashola now faces a daunting task at the national level, and one that may require equally contentious trade-offs: With Nigeria’s economic slump, Fashola and his team need cash on hand to deliver on campaign pledges, and quickly. The administration has promised to create a $25 billion infrastructure fund, but the timeline for its implementation is vague. Meanwhile, continued low oil prices have hurt government revenues, and the administration faces sustained pressure to devalue Nigeria’s currency. That could help revitalize local industries if local goods become cheaper than imports, but could also hurt ordinary people’s purchasing power and generate political backlash. This picture increases the urgency around infrastructure development, which is meant in part to create jobs. Most likely, however, a massive investment in infrastructure is still a ways off, as the government deals with the immediate economic crisis. If Buhari’s administration cannot both stabilize the economy and create jobs, the political price could be quite high. Some Nigerians already recall the promises of Buhari’s campaign, including on infrastructure, with bitterness. Ethiopia, meanwhile, showcases a different but equally controversial model of infrastructure politics. Since 1991, the country has been ruled by the Ethiopian People’s Revolutionary Democratic Front, first under Meles Zenawi, who died in 2012, and then by Hailemariam Desalegn, Meles’ successor. The regime has almost no tolerance for dissent, as exemplified by its exclusion of opposition parties and its repression of bloggers and journalists. Instead, it offers the population a deal that might be simplistically described as political acquiescence in exchange for rapid economic growth. Meles self-consciously pursued development as a state-led, ideological exercise, arguing that the state needed to intervene in the economy as something more than just a “night watchman” who would ensure security and protect contracts. State-led development in Ethiopia has used infrastructure not only to create jobs and drive growth, but also to shock and awe. The capital, Addis Ababa, recently unveiled the $475 million Light Rail Project, a subway system that aims to connect the suburbs to the city center. The project, a joint venture between Ethiopia and China, aspires to link the Addis Ababa system into a national rail network that will include more than 3,100 miles of track by 2025. Another massive infrastructure project is the nearly $5 billion Grand Renaissance Dam, currently under construction on the Blue Nile. The dam, solely funded by Ethiopia, is meant to generate 6,000 megawatts of electricity. Yet its construction has further strained relations between Ethiopia and Egypt, which have very different ideas about how the Nile’s waters should be used and shared. In July, U.S. President Barack Obama’s visit to Ethiopia attracted controversy. The Washington Post said that it sent the wrong message to visit a politically closed country like Ethiopia instead of Nigeria, which at the time was still basking in its electoral achievement. As the Post noted, “Administration officials justify the trip by citing the United States’ long-standing cooperation with Ethiopia on issues of regional security and the country’s accelerating economic growth.” Is Ethiopia’s combination of state-led development and political repression more effective, at least for international consumption, than Nigeria’s model of democratic contests and ad hoc policymaking? Both countries have achieved rapid economic growth. Yet some observers suggest that Ethiopia has reached the limits of what the state’s investment in infrastructure can do for the economy. The Ethiopian government’s violations of human rights and political freedoms, moreover, cannot be excused on the grounds that Ethiopia is experiencing swift development. Meanwhile, drought is projected to put some 15 million Ethiopians in need of food assistance next year, showing that major infrastructure projects like the light rail and the dam have not immunized the country against crises. At the same time, in Nigeria fears are already growing that Buhari’s economic policymaking is dangerously off course. For both countries, infrastructure remains key to growth and crisis management, but economic reality may call for different policies on the part of both governments. Ethiopia should focus more on development that brooks dissent and reaches the poorest and most vulnerable of its citizens, while Nigeria should undertake more of the massive, state-led infrastructure projects that have boosted Ethiopia. *Source WPR.Alex Thurston is a visiting assistant professor in the African Studies Program at Georgetown University. Follow him on Twitter @sahelblog.]]>