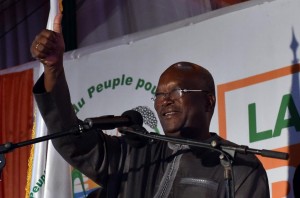 Kabore won 53.49 percent of ballots in Sunday’s poll, winning victory in the first round of a vote to restore stability after a popular revolt toppled longtime leader Blaise Compaore just over a year ago.

“We must get to work immediately,” 58-year-old Kabore, a former Compaore stalwart who served as his prime minister but broke ranks months before his downfall, told several thousand supporters early Tuesday.

“Together we must serve the country,” he said, pledging “to open up opportunities for a better tomorrow”.

Kabore expressed his “warm congratulations” to the transitional government that has run the west African country since Compaore was deposed by an uprising after trying to change the constitution to extend his 27-year rule.

The results of parliamentary elections are expected on Wednesday, and they will give some indication of how much power Kabore will have to make changes.

Kabore, an affable strongly-built ex banker and politician, was long an ally of Compaore and even headed the ruling party.

But in 2012 he fell out of favour with the old regime and in his brief time in the opposition he became a driving force in the campaign to oppose Compaore’s bid for a third term.

“We have a new president, we hope he succeeds in his mission in the interests of the people who rose up and in the interests of all of Burkina Faso’s people,” said Harouna Kabore, spokesman for a score of civil society groups behind the October 2014 uprising.

Even Diabre supporters spoke out in support of the new leader, with waiter Medard Nedie saying: “The election was perfect, there were no problems, so he deserved to win. Now we’re waiting for the work.”

President Francois Hollande of France, the former colonial power, spoke to Kabore by phone to congratulate him on his “clean and undisputed” victory and wish him well.

In September this year, activists returned to the capital’s streets to protest a short-lived putsch by Compaore loyalists in the presidential guard. 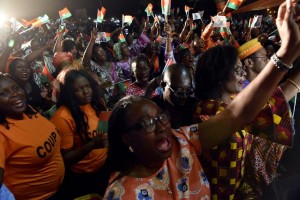 That unrest forced the presidential and parliamentary elections to be delayed, but Sunday’s vote went off largely without incident, with voters hungry for change standing in long lines to cast their ballot.

The head of the electoral commission, Barthelemy Kere, described the vote as “generally satisfactory” despite “a few anomalies” and said turnout was strong in all of the country’s 45 provinces.

Political scientist Salam Kassem dubbed the election “one of the cleanest ever organised in Africa.”

“People opted for Roch because they didn’t want a brutal break, they wanted a soft exit from the previous regime.”

Burkina Faso’s 18 million people, most of whom live in grinding poverty, are hoping for a long era of peace and democracy.

Seen as a consensus figure by some and an opportunist by others, Kabore has pledged to build “a new Burkina Faso” by fighting youth unemployment, improving education and modernising the health system. For over a decade he led the ruling Congress for Democracy and Progress (CDP) party and was seen as Compaore’s likely heir, but fell out with the strongman in 2012 and last year formed his own opposition party. – ‘Sighing with relief’ – “We’re smiling broadly, we’re sighing with relief,” said Halidou Ouedraogo, chairman of CODEL, the civil society platform monitoring the election. UN Secretary-General Ban Ki-moon hailed the election’s “peaceful atmosphere” as well as the “strong participation of women in the electoral process,” his spokesman Stephane Dujarric said.

The CDP was barred from fielding a candidate in the presidential poll under a contested law that prevented anybody connected with Compaore’s attempts to cling to power from seeking office.

But the well-entrenched party had several representatives standing in the parliamentary election and could score well under the system of proportional representation.

Around 25,000 members of the security force were deployed to keep the peace during the election, reflecting the nervousness in Burkina Faso over the uptick in Islamist attacks in neighbouring Mali.

In recent weeks there have been signs of the violence spilling over the border, with suspected jihadists attacking two police barracks along the frontier in recent weeks and holding up a van carrying money from a gold mine in the north.