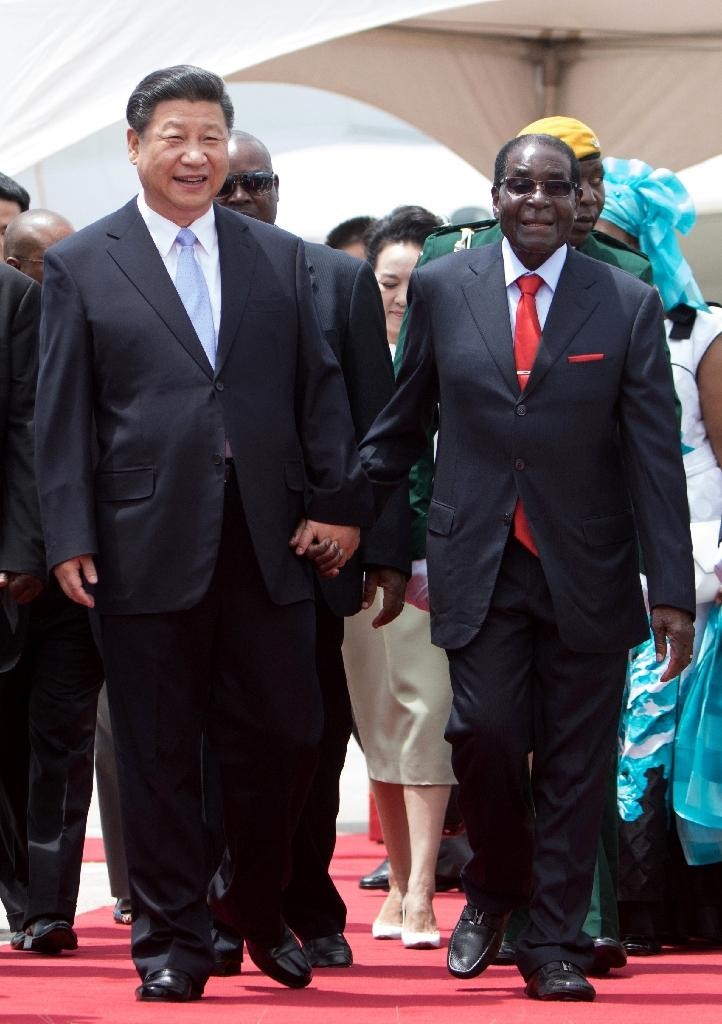 Xi was greeted at the airport by Mugabe, 91, who has ruled since independence in 1980, as hundreds of children waved Chinese and Zimbabwean flags along the road into the capital Harare.

“The people of Zimbabwe are overjoyed to host you,” Mugabe told Xi at a state banquet.

Mugabe welcomed Xi and his wife Peng Liyuan describing them as “true and dear friends of the people of Zimbabwe.”

The two leaders held talks and oversaw the signing by their ministers of 10 agreements and memorandums of understanding covering energy, aviation, telecommunications and investment promotion deals to shore up Zimbabwe’s economy, which has fallen into dire straits under Mugabe’s rule.

Xi is the most prominent leader for many years to visit Zimbabwe — a diplomatic coup for Mugabe who has fostered ties with China since Beijing backed several African movements fighting to end colonial rule.

“I am glad that Zimbabwe and China speak the same language on many issues,” said Mugabe.

“We share the same conviction that only a fair, just and non-prescriptive world order, based on the principles of the charter of the United Nations, can deliver the development we all need.”

There are already more than 100 Chinese companies investing in Zimbabwe, said Finance Minister Patrick Chinamasa, “and there is a lot of interest in all sectors of the economy from Chinese investors.”

“This visit gives a guide to Chinese investors that Zimbabwe is a safe destination for their investments,” he told reporters.

China is the largest buyer of tobacco from Zimbabwe, and — as in many African countries — has invested in mining, manufacturing and infrastructure.

China built Zimbabwe’s National Sports Stadium in the 1980s, as well as rural hospitals and the country’s biggest shopping mall, and also provided loans for water schemes and power stations.

– ‘Little improvement’ – But analysts say Zimbabwe’s economic troubles, which saw inflation soar to 500 billion percent according to independent estimates, during a decade-long recession that ended 2009, are unlikely to be solved by new Chinese investments.

“It’s not going to change our economic fortunes in the short-term,” Antony Hawkins, an economist at the University of Zimbabwe’s School of Business, told AFP.

“Considering what has happened with past deals, we are sceptical of promises of big, megaprojects. We have had a lot of Chinese involvement before, but little improvement has happened.”

Mugabe, who has often been accused of heading a repressive regime, was in October awarded the Confucius Peace Prize, a would-be Chinese rival to the Nobel Prize. “This so–called historic state visit is in actual fact a public relations exercise that will not bring any meaningful and tangible benefits to the tottering economy of Zimbabwe,” the opposition MDC party said in a statement. On Tuesday Xi also visited the Heroes Acre memorial site that honours Zimbabwe’s war dead. China also offered to fund the construction of a new parliament building and pledged to donate equipment for the protection of wildlife. China is a major market of ivory and rhino horn poached from African pachyderms. The Chinese president flies to Johannesburg on Wednesday ahead of a China-Africa summit. The summit, which will gather leaders from across Africa, comes amid growing African concern over the impact of the Chinese economic slowdown. Seeking raw material to fuel its booming economy, China has poured investment into Africa and became the continent’s largest trade partner in 2009.

But Chinese investment in Africa fell by more than 40 percent in the first half of 2015 due to its reduced demand for commodities such as oil, iron ore and copper.