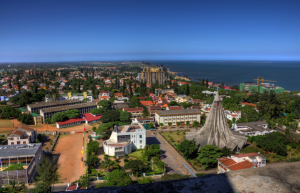 Maputo, the capital of Mozambique, is the large African city with the highest potential for inclusive growth, according to the 2015 MasterCard African Cities Growth Index(ACGI). Casablanca (Morocco) and Lagos (Nigeria) rank second and third respectively. Now in its third year, the ACGI maps African cities’ economic outlook according to their potential for inclusive urbanisation. The 74 analysed cities are organised into three categories by population size:large (over one million), medium (between 500,000 and one million) and small (under 500,000). Twenty five economic and social inclusion indicators rank cities’ level of inclusive urbanisation, forecasting potential for inclusive growth. Once ranked, the cities fall into one of four bands describing their inclusive growth potential – high, medium-high, medium-low or low. “The ACGI assesses the potential of Africa’s cities to increase the well-being of their urban populations,” says Professor George Angelopulo of the University of South Africa, author of the 2015 ACGI. “As inclusive urbanisation is a prerequisite for inclusive growth, the study presents a measure of each city’s potential as a place to live, work and do business in the coming years.” Maputo’s inclusive growth potential falls into the medium-high category, attributed to its share of Mozambique’s foreign direct investment (FDI), which as a percentage of national GDP is among the highest in the world. The city boasts constantly improving levels of government effectiveness, regulatory quality, and ease of doing business. Angelopulo notes that Casablanca – ranked second among large cities – is the only North African city withmedium-high growth potential, supported by Morocco’s relative stability in a turbulent region. In Lagos (Nigeria), the third-ranked large city which also has medium-high growth potential, the increase in percentage of middle class households is significant due to the number of citizens that increase represents, and the effect they will have on future consumption in the city. The 2013 and 2014 top-ranked city, Accra (in Ghana), now ranks seventh due to lower than anticipated revenue from the country’s Jubilee oil fields, exacerbated by the collapse of the oil price. The cost of wage increases, subsidies and debt repayments further undermines economic expansion projected for Accra. “Each city assessed by the ACGI has a unique set of socio-economic, cultural and political factors that influences its growth trajectory,” says Angelopulo. “However, a city’s response to the drivers of population growth, urbanisation and an increasing middle class ultimately determines the upward or downward direction of its inclusive growth.” “Cities with skilled and educated populations, low levels of crime and corruption, higher discretionary income, regulatory stability and predictable commercial environments are beacons for talent, business and investment, and they offer their citizens greater promise than cities without these characteristics,” he says. The only large cities in Southern Africa are located in South Africa, and all rank lower than in the 2014 ACGI report. Slow economic growth combined with increasing populations make it likely that South Africa’s cities are likely to experience greater inequality over the next decade. Pretoria is the South African city with the greatest potential for inclusive growth, followed by Johannesburg, Durban, Cape Town and Port Elizabeth. Matola, adjacent to Maputo to the west, is the ACGI’s medium-sized city with the highest potential for inclusive growth. It is also the city with the highest potential for growth throughout Mozambique, suggesting the positive outlook for the inclusive economic growth and development of Mozambique in the future. Matola is followed by Nouakchott (Mauretania) and Libreville (Gabon). All three cities havemedium-high inclusive growth potential. Of the small cities assessed, Windhoek (Namibia) and Victoria (Seychelles) rank first and second respectively with medium-high inclusive growth potential. Gaborone (Botswana) is third, with medium-low inclusive growth potential. Daniel Monehin, Division President for Sub-Saharan Africa, MasterCard believes that cities have a leading role to play in economic growth, particularly in the developing world where rapid urbanisation and an expanding middle class characterise the evolution of most of them. “However, inclusive growth is not possible without appropriate financial services and instruments in place to benefit the under banked and those excluded from the formal banking system. The only way to ensure sustained, inclusive economic growth is through the financial inclusion of all individuals, communities and countries – starting with the inclusive development of cities.” By supporting and investing in academic research like the ACGI, which provides insights into the opportunities for investment, commerce and higher standards of living in Africa, MasterCard provides valuable business intelligence to its customers, local governments and the investment community at large.    ]]>