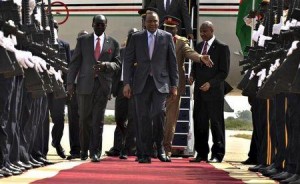 NAIROBI (Reuters) – Kenya’s President Uhuru Kenyatta has been forced to defend his frequent travel abroad after an outbreak of mass ridicule on the Internet from Kenyans mocking him as a foreign leader making a fleeting visit to their country.

Kenyatta returned last week from trip abroad that included a summit in South Africa, a climate conference in France and a Commonwealth meeting in Malta. He is due to travel to Rwanda later this week.

Kenyans have been trading photos online that depict highlights of his “visit” to Kenya. In recent days, the criticism has gone viral on the Internet, with the hashtag #UhuruInKenya surging in rankings of posts on Twitter.

A popular road traffic information website with more than 300,000 followers joked that a major Nairobi street had to be closed so Kenyatta could stay at the Kempinski Hotel, where U.S. President Barack Obama lived during a visit in July.

Photos uploaded by Twitter users depict him on the typical itinerary of a visiting dignitary: signing a visitors’ book, touring a national park, greeting religious leaders and meeting other politicians, labeled as “hawkers”.

In a poor country where corruption has been a central issue for decades, the mockery has struck a chord with a public angry at the lavish lifestyles of the political class. Presidential spokesman Manoah Esipisu was obliged to defend Kenyatta’s foreign trips at a news conference on Sunday. “The cost is really nothing compared to the result,” he said, noting a $1.5 billion Chinese loan secured during the summit meeting in South Africa as one example. “We cannot claim the leadership position we have in the region yet shun our obligations to deal with regional issues.” As for the size of delegations, “it would be folly to send two lawyers” to Paris climate talks when other countries sent dozens, Esipisu said. The Daily Nation, one of Kenya’s leading newspapers, said the president had been on 43 government trips since taking office in 2013, while his predecessor President Mwai Kibaki made just 33 in 10 years in power. “It sometimes feels as if the president is more comfortable away than in Kenya,” said John Githongo, one of Kenya’s most outspoken anti-corruption activists. Opposition CORD coalition spokesman Dennis Onyango said that while the head of state had to travel, his delegations included “quite a number of joy riders, people who really don’t have a role.”

Kenyatta’s jet-setting ways are being compared with the cost-cutting announced by the newly elected president of neighboring Tanzania, John Magufuli, who since taking office last month has restricted official travel and banned perks like government-printed Christmas cards.