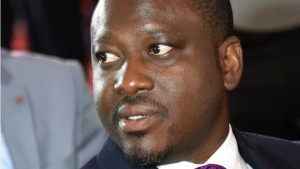 Guillaume Soro is in Paris at the UN climate conference[/caption]

Ivory Coast’s government has protested to France after a French judge issued an arrest warrant for the speaker of its parliament, Guillaume Soro.

The warrant stems from a case brought against him in 2012 by ex-Ivorian President Laurent Gbagbo’s son. Michel Gbagbo, who has dual French and Ivorian nationality, alleged Mr Soro’s forces kidnapped and tortured him after his father’s capture in 2011. The government says Mr Soro, who denies the accusation, has immunity. Mr Soro commanded a rebel force which fought the ex-president, who has been charged by the International Criminal Court with war crimes – charges he denies. Ivory Coast’s Foreign Minister Charles Koffi Diby said he had written to the French government to protest that the warrant breached international law, and should be annulled. Mr Soro was in France on an official mission, and had “absolute immunity”, he said. [caption id="attachment_22976" align="alignright" width="300"] 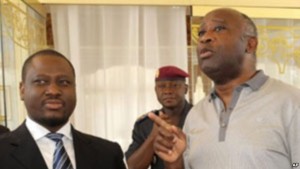 Ivory Coast former President Laurent Gbagbo (R) speaks with Ivory Coast’s Prime Minister Guillaume Soro before a meeting at the presidential palace in Yamoussoukro on February 18, 2010, Photo credit VOA[/caption] Michel Gbagbo’s lawyer Habiba Toure told the BBC that Mr Soro could have avoided an arrest warrant if he had heeded requests to appear before a French court. Some 3,000 people were killed in the five-month conflict in Ivory Coast that ended when Mr Gbagbo, who had refused to accept that he lost elections to current President Alassane Ouattara, was captured in April 2011. Human Rights Watch has said since the end of the crisis, progress toward justice has been largely one-sided. The BBC’s Tamasin Ford in Abidjan says Mr Soro is one of only a handful of people facing investigation from current President Ouattara’s side, compared to hundreds in the opposition camp. *BBC]]>