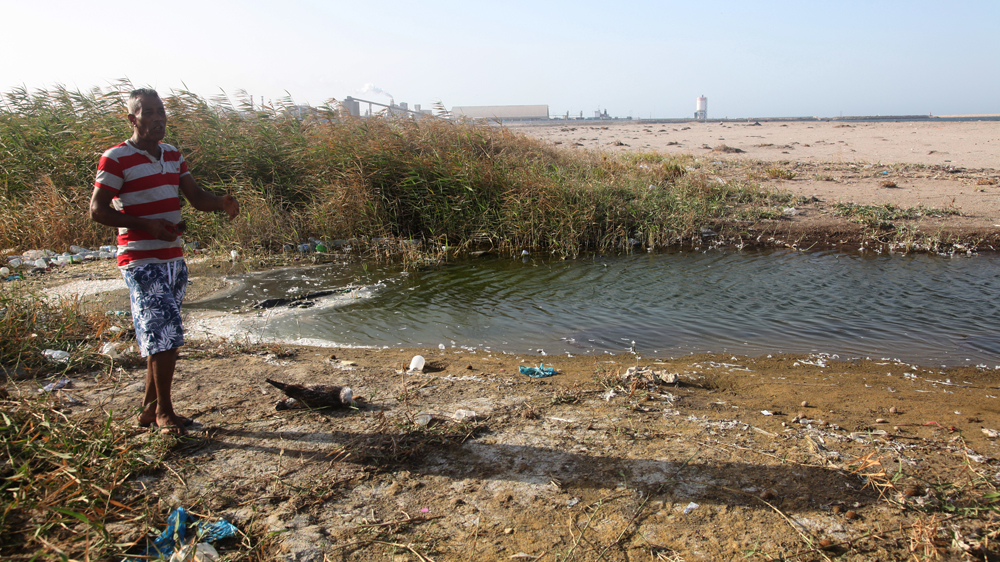 Gabes, Tunisia – Fisherman Sadeg Ghauma, 64, shakes his head as he points to a dead bird in a puddle of dirty seawater.

He is standing on the Chott Esselam beach next to a phosphate plant in the southern Tunisian city of Gabes. “When I was young, this place was a paradise,” he said. Now, instead of sand, the beach is covered in a thick layer of grey phosphogypsum waste from the plant.

Of the 250 species of fish that once thrived here, only 40 or so remain, according to local officials. The fishermen now have to travel farther and use more petrol before they spot any fish, said Mahrez Hamrouni, the head of the local fishermen’s union. He spent years working in the phosphate plant himself, but has now retired.

“They should stop dumping waste into the sea,” he told Al Jazeera. Storing phosphogypsum waste on land would do a lot to reduce pollution in the area.

The state-owned Tunisian Chemical Group, based in Gabes, has produced and exported phosphoric acid and fertilisers since 1972. The company is an important driver of the Tunisian economy, and last year made 1.47bn Tunisian dinars ($720m) in revenue. It employs 3,500 people in Gabes, and has plants in Sfax and Gafsa.

Thameur Zreli is a nurse and spokesman for eight environmental organisations in Chott Esselam. “Those who can afford it leave town,” he said, sitting at a restaurant beside Ala Ben Rabeh, a journalist and member of Green Future, an environmental NGO. Like many people in Gabes, Ben Rabeh suffers from breathing problems.

After the revolution in 2011, many people in Gabes jumped at the opportunity to set up environmental NGOs – a process virtually impossible under the old regime. According to Expertise France, there are hundreds of environmental NGOs currently operating in Gabes. Expertise France, an international technical expertise agency, provides the organisations with subsidies, using funds it receives from the European Union, and would like to see them work together and merge.

Although countless demonstrations have taken place, very little has been achieved in the past few years, activists say. “Most organisations aren’t really active,” Ben Rabeh told Al Jazeera. “Some people only join to get a subsidy or to further their careers. Not many work together, because they have different strategies and political affiliations.”

Historically, political repression has also been an obstacle to environmental reform in Tunisia. Zine El Abidine Ben Ali , the former president, presented himself to the world as a green advocate, but activists were often stopped and threatened. According to Zreli, this type of governmental intimidation still occurs.

A doctor from Gabes, who asked to remain anonymous, said that he was imprisoned and tortured in the 1990s for refusing to keep his mouth shut about the detrimental impacts of pollution on health.

“Have you noticed how hard it is to breathe here, and how quickly it tires you out?” he said from a site near the plant’s chimneys. Last year, he took his medical records to various government ministries and to former President Moncef Marzouki in Tunis, he said.

“It’s my responsibility to address this issue, but I was sent away everywhere.” He said about 80 percent of the children in Gabes have weak bones, “not to mention all the cancer cases”.

In a suburb of Gabes, where several patients were seated in the waiting room of the Cancer Patients Association, a local NGO, Houria Beji said she would soon undergo treatment in Tunis for liver cancer. “Every day we’re confronted with that disgusting smell,” Beji, 52, who lives five kilometres from the plant, said with a sob. “They should close down the plant.”

On another couch sat Maryam Saada, 37, who is unemployed and hopes the association will pay for her husband’s treatment. Her husband worked for the phosphate plant until he was diagnosed with cancer. Asked whether she thought things would improve, she replied: “In our dreams.”

The association’s chairperson, Sabrine Thabti, said many people cannot afford treatment. “What’s more, we don’t have any specialised doctors here. The [health] minister has been promising to bring chemotherapy to Gabes for 40 years,” Thabti told Al Jazeera. According to the association, Gabes is the most cancerous city in the country and has the highest rate of infertility and premature births. However, the lack of a proper registration system makes this difficult to verify.

“The plant’s directors always say: ‘Give us scientific proof that would connect the pollution to the diseases,’” said Zreli. “But then they do their best to make sure no studies can be conducted.”

Beginning next year, however, Expertise France – in partnership with Tunisian authorities – will carry out the first study in Gabes on the correlation between pollution and health. The research, which is part of a five-million euro ($5.5m) project by the European Union to improve the environment in Gabes, will take about six months to complete.

The Tunisian Ministry of Health drafted a research proposal for a similar study back in 2003, but the funds needed – 200,000 Tunisian dinars ($99,000) – never came. However, the ministry did calculate that sulphur dioxide levels in the air in Gabes were much higher than the permissible standards, which can lead to breathing problems, allergies and cardiovascular disease.

Meanwhile, plans to store Gabes’ phosphogypsum waste on land have remained on the back burner for years. In 2010, the plant dumped 13,000 tonnes of radioactive waste – phosphogypsum contains radioactive elements – into the sea each day. The amount is lower now, said plant spokesman Abdelrahman Belgacem, but he did not give the exact figure.

According to a European Commission spokesperson, the EU spent around 670,000 euros ($736,000) between 1999 and 2009 to find a site to dump the waste, and a potential location was eventually identified. However, the inhabitants of the small town of Oudhref, located about 20km northeast of the plant, rejected the plan for fear that the waste might contaminate their groundwater.

“Everything was ready in Oudhref,” said Youssef Zidi, head of the industrial environment department at Tunisia’s Ministry of Environment and Sustainable Development. “There have been similar storage facilities for years in Sfax and Gafsa. Even in California they have such facilities. I believe it’s safe. But then the revolution happened, and people started protesting everything.”

The ministry has now appointed a scientific committee that has until the end of this year to find a suitable dumpsite on land. “We hope they reach a decision soon,” Belgacem said. “Although there will always be risks, it’s the best solution.

“In the past, you weren’t allowed to discuss the pollution problem, but we’ve become much more open,” he added. “We are trying to do everything according to international standards now. I’m sure much will have improved here in two years.”

Mabrouk Jabri, a retired teacher, walked past a dry brook and diseased pomegranates in the oasis of Chenini, west of Gabes. “When I was young, our oasis was known for its many fruits,” he said. He has been an environmental activist since the 1980s, and founded the Association for the Protection of the Chenini Oasis Gabes, a local NGO.

Jabri said that the government does not care enough for the Tunisian people’s health, and “it’s time for this to change”. But he doubts that a change will happen soon – and worries that the end-of-year deadline to find a waste storage location will not be met.

The post Is help on the way for Tunisia’s cancer hotspot? appeared first on African Media Agency.