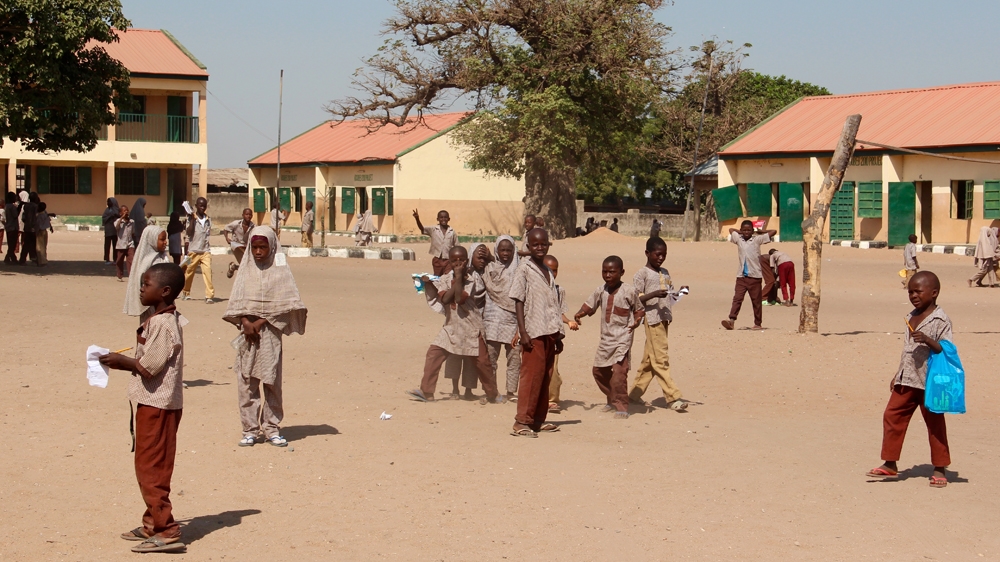 Adamawa’s state capital used to be a haven for Nigerians on the run from Boko Haram’s violence. Lately, however, the city of Yola has been the site of several bombings. The most recent occurred on Tuesday, November 17, and claimed 34 lives. Al Jazeera went to the scene a week later.

The playground of the Doubeli Primary School in Yola North is unusually quiet at break time. Only about a tenth of the 2,000 pupils have shown up for class today. After yesterday’s bomb scare, most parents have chosen to keep their children at home. It is exactly a week ago that a bomb exploded in front of a busy phone shop on Jimeta Bypass, less than 500 metres from the school, claiming 34 lives and injuring 80.

Everyone along this busy road on the periphery of Adamawa’s state capital, in northeast Nigeria, knows someone who was affected. And everyone is afraid that it might happen again.

On the evening of Tuesday, November 17, at about 10 minutes to eight, a small crowd had gathered in front of Tipper Garage, by the side of the asphalt road that leads to the bridge across the Benue River. A man was giving out cash to children, some eyewitnesses say up to 500 naira ($2.50) each. Just as he left in his car, after promising to bring more money, an explosive device went off in the crowd. Almost a third of the victims were children.

Parents in Yola now warn their children never to accept money from strangers. So when, yesterday morning, the pupils of Doubeli Primary School saw a man climbing over the school fence who said he had sadaka (gifts) to offer them, they panicked.

In the scramble for the gate, several children were injured.

“Six of the victims of the blast last week were from our school,” says Abdulmalik Yakubu, the headteacher at Doubeli Primary. “Many children have lost a friend, have seen the blood. You can imagine how frightened they were.”

When the bomb squad and police arrived at the school this time, they didn’t find anyone or anything suspicious on the premises. This time around, they got off with a scare.

Across the road from the primary school, Quranic teacher Umar Jibril sits on the shaded platform in front of his house where he usually teaches his almajiri (religious students). At the age of 11 or 12, these children are sent to him by their parents to learn the Quran. Often these almajiri make a little extra money by selling bags of water or by pushing wheel barrows.

The garage, where lorries carrying sand park, is the place to be in Yola North if you are building a house. Many almajiri hang around there, hoping to secure some custom for their wheel-barrowing enterprises or other chores.

That’s why the Quranic teacher is in mourning: six of the victims of the bombing were in his care. The youngest was 14 years old, the oldest 16.

As neighbours come by to pay their respects, Umar Jibril remembers the children he lost.

There was 15-year-old Mohammed Ibrahim, who wanted to go back to school to become a lawyer after finishing his Quranic education. Then, there were best friends Dazuru Mohammed and Mohammed Ben-Azumi, 15 and 16, who did everything together, including looking for odd jobs at Tipper Garage. Suleman Bashiru was just 13 and sold bags of water. Sixteen-year-old Ibrahim Jalow learned his Quranic verses by heart faster than anyone else. His friend Mohammed Dauda, at 14 was already taller than most in the Quranic school, but was imperturbable when teased about it.

“According to Quranic teaching, I am like a father to these children,” explains Jibril.

He was away when the explosion happened, but rushed back when he was told about it by phone, already worried that some of his 60 pupils might have been at the site. He wonders how anyone can justify murdering children.

“There is no single place in the Quran that tells anybody to go and kill innocent sons. These people do not represent Islam,” the teacher says.

Jibril does what he can to keep his children safe, but it isn’t easy.

“I warn them not to go to crowded areas, and tell them to be careful. But children are children, I can’t tie them up. There is not much more we can do than pray,” he says, before greeting another neighbour who has come to offer his condolences.

Everyone is a target

Yola was always a relatively safe place. Until this year, there had never been an explosion inside the city, and many people fleeing Boko Haram violence further north found refuge here. Lately all that has changed.

The first bomb exploded in the state’s main market in June, the second in a camp for internally displaced people in September, and the third, in October, targeted a mosque close to a campus of Adamawa State Polytechnic.

One thing is clear: everyone here is a target. But Yola’s residents do not sit around waiting for something to happen to them.

Idrisu Mohammed is washing his feet before going into the mosque to perform his afternoon prayers. Mohammed is the ward head of Wuro-Kuturo, the neighbourhood in Doubeli District where the most recent explosion happened. According to him, the population here has become more vigilant over the past few months.

“As a stranger, you will get noticed,” he says. “When I see a face I don’t recognise, I walk up to the person and ask them who they are and what their business is. The guilty will get nervous when you do that,” the ward head explains before finishing his ablution and entering the mosque.

To do so, he has to pass Umaru Ibrahim and his metal detector. Ibrahim is one of the many volunteers who have for the past three months been securing the entrances of Yola’s mosques and churches. He feels it is important community service.

The mosque is a stone’s throw from the site of last week’s blast, but Ibrahim has never encountered any problems. Even so, he keeps a nail-studded bludgeon hidden close by, just in case.

“We have to remain vigilant,” he says. It is a word that seems to echo across town these days.

Jimeta Bypass is the only road crossing the river and connecting the north of the state with its capital. It is always busy. Lorries and cars rush by, hawkers and pedestrians walk in the sand beside the asphalt, and countless yellow tricycles look for costumers to carry.

A lorry loaded with sand is slowly turning on to the road from Tipper Garage. If you didn’t know that the sand on the ground covers patches of blood or notice the scorched wooden poles that used to be a phone repair shop, you might never suspect that so many had died here just a week ago.

Abdullahi Sanusi is nailing a piece of cardboard on to the new doorpost of his corner shop. It was his phone repair shop that was blown to pieces by the explosion. He was inside when it happened and the blast threw him to the floor. He wasn’t injured, but many of his customers outside died instantly.

He says he doesn’t like to come back to this place, but he has no choice: his business is how he feeds himself. That’s why he and some friends started rebuilding his shop last Sunday. They hope to finish it soon so that he can get back to work.

In the same way, Sanusi Mohammed feels ambiguous about reopening the boutique he owns only 10 metres away from the explosion. He was inside his shop when the blast blew his fan off the ceiling, but he was unharmed.

A customer checking out men’s clothes in the doorway was less lucky. A piece of shrapnel struck him in the back of the head.

Mohammed has heard that the man has been was released from hospital, but says he will never forget the sight of his injured customer.

He looks at people differently now, he adds, and no longer trusts anybody.

There normally are plenty of food vendors at this corner, but today only Mary Michael is selling jollof rice and meat.

She always goes home at five, and did so on that particular Tuesday. It was lucky for her. Her colleague, Sadiya, was still there with her two sisters and their containers of food. They didn’t survive.

The woman who used to sell food right next to her was wounded, and Michael went to see her in hospital the next day. She has been discharged but hasn’t yet returned to work, leaving an empty space beside the table where Michael dishes out her food.

“I am back at work, but my mind is not,” says the food seller. “I hardly sleep at night. And if you come for food and I don’t know you, I will tell you food has finished.”

“I don’t trust anybody,” she adds.

The two-lane road leading into Yola’s State Specialist Hospital is quiet this afternoon. Only the bloody smudges on the emergency room doors evoke the scenes of that night.

“Free treatment of victims of terrorism,” says a banner next to the entrance.

Twenty-eight patients were brought to this hospital after the bombing. Twenty-two of those were male.

The timing of the explosion, just before eight in the evening, almost guaranteed a large number of male victims. If there is no necessity to go out, most girls and women in Yola stay at home, even more so after sunset.

All of the female patients have been sent home, but the male ward still holds some of the victims.

Mohammed Abdullahi is sitting on his bed and still looks dazed. The painter came back from work late that Tuesday and decided to stop at Tipper Garage for some food.

He remembers hearing a loud noise and feeling a sharp pain in his stomach. The next thing he knew he was waking up in hospital.

His wound is healing now; he can eat solid food again and the doctor assures him that he can go home soon. One thing he knows for certain is that he is “never buying food in a busy area again”.

Across from Abdullahi’s bed, Muhtari Adamu rubs his bandaged knee.

He had gone to the phone repair shop to collect his phone battery, which was charging there. He was putting it back in the device when the explosion happened.

But he isn’t sure which places to avoid in the future, he says with a sigh. After all, Boko Haram could hit anywhere.

A deadline to defeat

Back near the site of the bomb blast, ward head Idrisu Mohammed is continuing his rounds.

In his ward alone, 11 people died and another six were injured. Mohammed went to all the affected families to pray with them, and still visits them regularly.

As he strolls along the sandy roads of his neighbourhood, he speaks of the fight against Boko Haram. The Nigerian military, given a deadline by President Muhammadu Buhari to end the insurgency by December, has been quite successful in chasing Boko Haram fighters out of their strongholds in Adamawa.

The group, which had at some point held around seven districts in the north of Adamawa, no longer holds any in the state and most locals who fled have now returned to their homes.

The ward head feels that the assaults his city is experiencing are a result of that military success.

“Boko Haram has nowhere to go anymore. That is why they are returning to their cowardly tactics,” he says. “It is a sign they’re getting weaker.”

The post Inside the Nigerian city targeted by Boko Haram appeared first on African Media Agency.