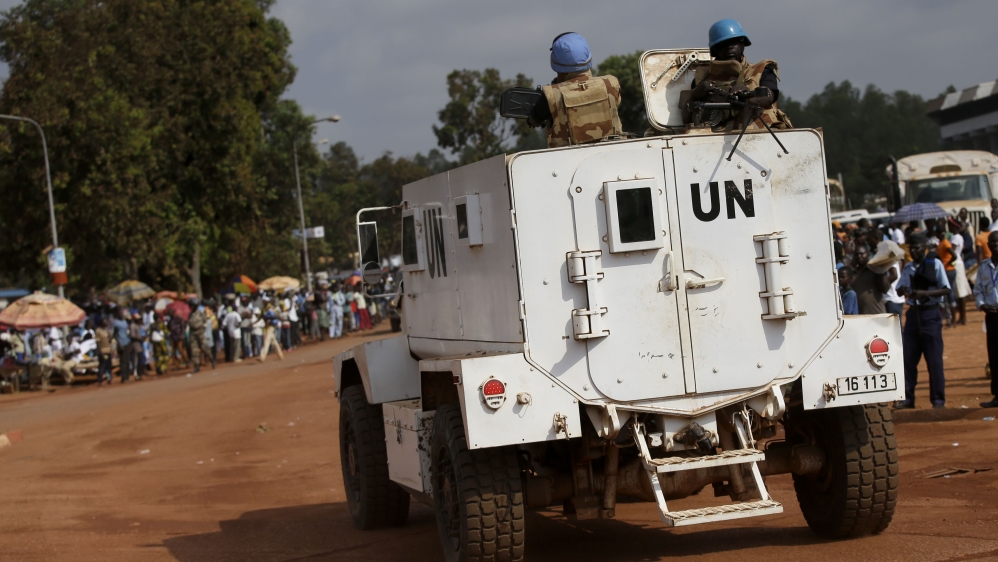 At least two people have been killed and 20 others wounded when heavy fighting broke out in a Muslim enclave of Central African Republic’s capital Bangui as people voted in a constitutional referendum.

Gunfire and the explosion of rocket-propelled grenades were heard in the PK5 neighbourhood, witnesses told the Reuters news agency.

Residents of the isolated enclave, which was visited by Pope Francis during a trip to Bangui last month, marched to the headquarters of the country’s UN peacekeeping mission, MINUSCA, to complain they were unable to cast their ballots.

The mission responded by sending soldiers to protect voters and poll workers in PK5.

The new constitution – seen as crucial to restoring stability in the restive country – is set to replace a transitional charter that currently governs the former French colony.

About one-quarter of CAR’s 4.7 million population has been displaced since March 2013, when Muslim Seleka rebels overthrew Christian president Francois Bozize.

Fighting has been ongoing between armed Christian groups and Muslim rebels since then despite the deployment of the 11,000-troop strong MINUSCA last year.

Voting got off to a late start in many neighbourhoods in the sprawling, riverside capital, but queues formed in front of polling stations across the city.

“We received all the necessary materials for voting yesterday, and it was all monitored by MINUSCA agents,” said a member of the National Elections Authority (ANE), Fabien Kodou.

“This morning, we started work very early. We were missing certain things, including the electoral list. It’s quite disorganized and there’s nothing we could do about it. But we’re trying our best and at least we had a good start.”

Following months of relative calm in Bangui, clashes in late September sparked a fresh wave of inter-religious fighting that has killed more than 100 people in and around PK5, according to rights campaigner Human Rights Watch.

If approved, the new charter will bar members of current interim government from standing in December 27 legislative and presidential elections.

It will also limit the presidency to two terms and has provision for a senate – which will be the main legislative body.

The landlocked nation is currently led by interim President Catherine Samba-Panza, a Christian, and Prime Minister Mahamat Kamoun, a Muslim.