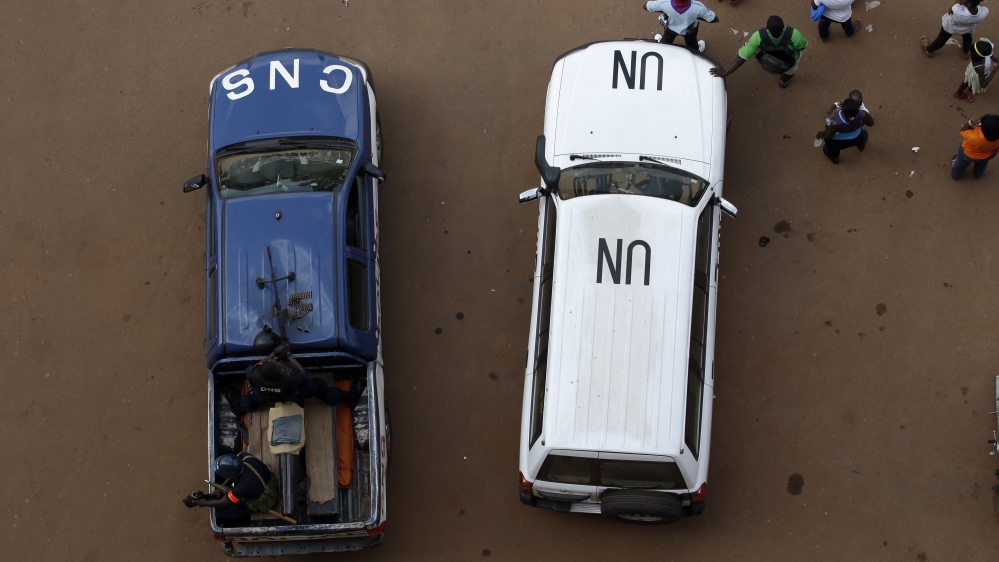 Gunfire has erupted in the Central African Republic’s capital Bangui, where protesters erected barricades after an announcement that ex-president Francois Bozize was barred from running for election.

A French embassy text message sent to citizens said there were “barricades and gunfire” in at least eight districts in the city and advised French citizens “to avoid these areas” on Tuesday.

The unrest followed the Constitutional Court’s rejection of the exiled Bozize’s bid to run for president in December 27 elections.

The presidential and parliamentary polls have been expected to signal CAR’s return to normalcy after two years of sectarian violence between Christian and Muslim fighters that began after Bozize’s March 2013 ouster by a mainly Muslim rebel alliance.

A total of 30 candidates were cleared to run in the first round of the presidential vote by the transitional regime’s Constitutional Court, which rejected 15 applications, including Bozize’s.

Patrice-Edouard Ngaissona, a leader of the mainly Christian militia – known as the “anti-balaka” – was also barred from running for the country’s top political post.

Almost two million people have registered to vote for a new head of state and 141 parliamentarians.

Failing an outright win, a second round is scheduled for January 16. The city centre remained calm late on Tuesday with the unrest mainly in outlying areas.

A helicopter flew over Bangui throughout the day people could be seen hurrying to get home before dark. “No one knows what can happen with these youngsters,” said a woman who gave her name only as Yolande.

The elections have been postponed several times already and organising the ballot remains highly problematic as parts of the country remain under the control of Muslim rebels opposed to the vote.

David Zounmenou, a senior researcher at the Institute of Security Studies, told Al Jazeera last week that authorities are neither prepared to provide security nor able to guarantee all eligible voters would be represented on the voters’ roll.

“There is no way disarmament of the militia groups would be complete by December 27, and by all indications, I think elections will take place in March 2016,” said Zounmenou, of the institute’s African Security Analysis Programme.

Sunday will see voters take part in a test run, when they go to the polls to approve a new constitution.

Bozize, 69, who is now living in exile in an unknown African location, is the target of UN sanctions for supporting the Christian militias who have attacked members of the Muslim minority in tit-for-tat fighting that has devastated one of Africa’s poorest and most unstable nations.

Around one in 10 people remain displaced in the country where more than 12,000 UN troops have been deployed to keep the peace, along with a smaller French force.