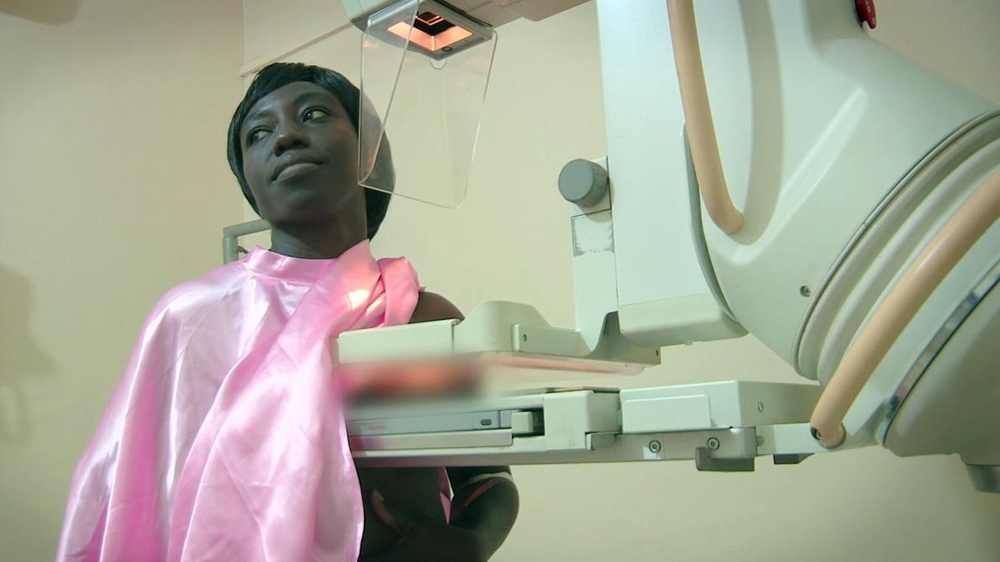 Of all the exports from the West to the developing world, breast cancer is one of the most unpleasant.

What was once described as a curse of the rich, is now on the march through Africa and Asia – with increasing prosperity and a move away from traditional lifestyles believed to be the factors to blame.

Specialists say that a combination of richer diets, smaller families, delayed child-bearing and reduced breast-feeding have driven the increase in number of breast cancer cases. Rising obesity and increased alcohol consumption may also be factors.

In West Africa – especially the comparatively wealthier nations like Nigeria and Ghana – these trends are especially easy to see. Not only is the number of women contracting breast cancer increasing, but more than half of women there who contract the disease will die from the disease – statistics far worse than in Europe or the US.

Journalist Chika Oduah, went to Ghana to investigate. Why, she wanted to know, are the mortality figures there so high? What hurdles do women face in getting treatment? And what truth is there in stories she’d heard about some individuals taking advantage of this crisis? Working alongside Ghana’s legendary undercover specialist, Anas Aremeyaw Anas, she reached some disturbing conclusions.

Perhaps now is the time for me to admit, that I too, did not believe that cancer posed a serious threat to Africans living on the continent. I, too, believed that communicable and parasitic illnesses like malaria, HIV/AIDS or typhoid were the only health concerns Africans truly had to worry about. I should go on to admit that I assumed that the fresh air, fresh produce and less industrialised settings of Africa’s rural villages offered some sort of protection from cancer.

When it came to breast cancer patients, every face I had ever seen in a magazine or in a television documentary or in a hospital advertisement was the face of a white woman. As a woman of West African descent, I was secretly proud of whatever was “protecting” us black women from breast cancer.

That’s why when I heard that breast cancer was striking women in Ghana, I was still in denial. These must be the rich wives of Ghanaian politicians who spent most of their time vacationing in London and the United States where they had easy access to synthetic products like cocoa butter lotion – comprised of less than one percent of actual cocoa butter. In the West, these wealthy Ghanaian women ate too many sugary, packaged, preservative-laden foods like microwavable pancakes and hybrid produce like broccolini or apriums. At least, that’s what I thought.

The Ghanaian women inflicted with breast cancer were surely, not among the masses of working women living in small towns.

I went on the ground with Africa’s pre-eminent undercover journalist, Anas Aremayaw Anas to investigate the scourge of breast cancer in Ghana. Together, we discovered that here, breast cancer was alive and well.

In Kumasi, the second largest city in Ghana, I saw with my own eyes how breast cancer had eaten not only through tissues in women’s bodies, but had also devoured chunks of their lives. Some of the women revealed that their husbands had run away from them. Others said they were living in seclusion, too ashamed to leave their homes to attend social gatherings in church or go to parties. The damage to their breasts had become visibly offensive.

Most shocking to me, was the fact that the women I met who were afflicted with breast cancer, were not the rich wives of Ghanaian politicians that I had confidently imagined they would be. They were among the masses, the working population, not among the ruling elite. Many of them were from the rural areas and had travelled to Kumasi desperately looking for a cure. Some had little formal education and many were younger than I had assumed, in their 40s or 30s, and even 20s.

During a chat with Ghana’s most famous breast care specialist, I confessed my surprise. I told her I would never have imagined that so many women living in rural areas in Ghana were falling victim to breast cancer. The doctor also said she was first surprised as well and there was simply no explanation as to why. What about our grandmothers and grandmother’s mothers and nieces? Had they known about breasts illnesses? In the village stories and oral traditions passed down from generation to generation, why was there no mention of women who succumbed to strange bumps growing on the breasts?

It all sounds brand new and breast cancer has taken us, African women, by surprise. So of course, this story was personal for me. As a woman, as a dark-skinned person, as an African, I became vulnerable. I wanted to be a part of what these women were going through and empathise with them because with their dark-skinned glory, coarse curly hair, and robust bodies, these women reminded me of my aunties, my cousins, my grandmother – my mother.

These women were not far removed from me. I was determined to tell this story with care and with cultural understanding.

Reporting this story, I learned that not only is breast cancer chopping off women’s lives in Ghana, but really, it’s because women were unknowingly prolonging their own suffering. Instead of going to a medical doctor when they first detect something unusual with their breasts, too many of them were trying to solve their breast issues through alternative healing, like going to a spiritual healer or using herbs. As time passed, the disease only worsened. Wounds in the breasts would develop an offensive odour. Protruding tumours made it nearly impossible to wear clothes in a normal fashion.

This is what I saw at a breast care centre in Kumasi – women wholly suffering.

Cancer is real in Africa and breast cancer is nothing to joke around with.

Throughout my investigation, I realised that there was a great disconnect in the society when it came to treatment. Somehow, all the moving parts are not fitting together. There are clear cultural clashes and competing voices. For example, some of the local radio adverts broadcasted in Twi language openly discouraged women from going to hospitals for cancer treatment. Some Christian pastors are preaching against chemotherapy and mastectomy operations, urging patients to cast their trust in the healing power of Jesus Christ. Going to a medical doctor was almost sinful, because it’s an expression of doubt in Jesus. The hospitals are simply not doing enough grassroots outreach.

Herbalists are incredibly popular in this country. There are more herbalists than medical doctors here. Driving through Kumasi’s daily traffic, I gazed at flyers nailed on tree trunks advertising this herbalist and that herbalist who could cure everything from cancer to infertility.

I even met one herbalist who said she was able to cure her own cancer with her homegrown remedies. Herbalists sell their products as “African solutions” or “natural, side-effect free solutions” to health problems. A supposed ‘side-effect free’ solution is tempting.

The widespread ignorance of modern medicine is literally killing hundreds of women in Ghana. They are running away from going to hospitals because they do not want the doctor to say they must surgically remove their breasts. In many cultures, breasts and womanhood are synonymous. You can’t remove one without removing the other. I heard this sentiment over and over during this investigation. In silence, I wondered what these women would think about Angelina Jolie, the Hollywood actress who had a double mastectomy to prevent the onset of breast cancer. Immediately afterwards, Jolie had her breasts surgically reconstructed.

From what I gathered talking to doctors in Kumasi, mastectomy operations are not commonplace. The cultural barriers against such an operation are too strong. Many women are doing everything possible to substitute hospital treatment.

That’s why I was so impressed when I met a young woman who had decided to have a mastectomy. She said she and her husband agreed that it was the best thing to do to restore her health. I noticed that this woman had a university education and I imagined this is what made her different from the other women I had met.

That woman had done what many in her society would not do – surgically remove her breast to rid her body of cancer. From what I could tell, she was at peace with her decision. That gives me hope that soon, more women in Africa with breast cancer, will follow suit. And by doing so, medical research can be carried out to produce medical treatments specifically tailored for African women.