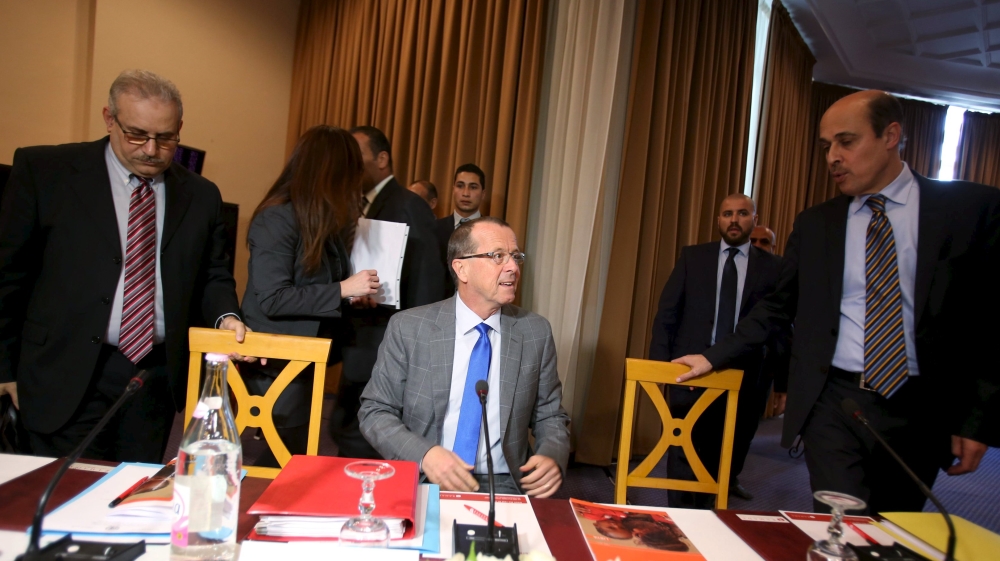 Libya’s rival factions have agreed to sign a United Nations-backed national unity government deal, but questions over whether the main political and military actors are backing the agreement have raised serious concerns over the forthcoming process.

Representatives from Libya’s two rival parliaments – Salah Makhzoum of the General National Congress (GNC) based in Tripoli, and Mohammed Shoaib from the Tobruk-based House of Representatives – announced in Tunis that the signing of the deal will happen on Wednesday.

But that is not the reality.

What Al Jazeera understands is that Makhzoum no longer represents the GNC. In fact, one analyst says he has been sacked.

And what we also understand is that the majority of the Tripoli-based institution is not onboard – the GNC is backed by Libya Dawn, an alliance of powerful armed groups.

In Rome on Sunday, the UN and the West are expected to speak with a “strong and united voice” in support of the deal.

Italian Foreign Minister Paolo Gentiloni acknowledged the agreement is perfect but said he hoped the majority of Libyans will put their differences aside.

“The goal on Sunday is to have the most inclusive possible solution. We won’t have 100 percent but we hope we will have 90 percent. There is a need for an inclusive solution to stabilise Libya,” Gentiloni told al Jazeera.

The reality, however, is different and even Martin Kobler, the UN envoy to Libya, warned of what he called dangerous signs of internal fragmentation within the rival parliaments.

Anas al-Gumaty, a Libyan analyst close to the delegates, told Al Jazeera the majority of the internationally recognised government in Tobruk is backing the agreement – but most of the legally installed GNC are not.

Some 15 Libyan representatives were expected to join the Rome conference.

“So far the only one from the GNC is Makhzoum, but he has been sacked,” Gumaty said. “Makhzoum represented himself in Tunis.”

The international community’s strategic priority is to end the security and political vacuum in Libya.

It is worried about the growing strength of the Islamic State of Iraq and the Levant (ISIL), with some saying that Libya has become the group’s “fallback position” after coming under pressure in Syria and Iraq.

Italy is particularly concerned not just because Libya is a transit point for refugees trying to reach Europe, but also because of ISIL’s increased presence – the armed group has been taking ground and is now going after the gas and oil wells in the city of Ajdabiya.

The US has already carried out a few air strikes against ISIL in Libya, but the West hasn’t ruled out concerted military action.

“That is Plan B,” Gentiloni told Al Jazeera. “For now, we will concentrate on the diplomatic efforts, which is the only way to stabilise Libya

Libya has many armed groups on the ground who not only operate above the law but are linked to politicians.

They won’t disarm without guarantees.

We understand from Libyan sources that the GNC is pushing for a clear clause in the agreement that would protect individuals from being charged with war crimes or terrorism.

“Many Libyans don’t trust the international community and don’t want to open the door for foreign intervention,” the sources said.

The days ahead will give an indication on whether the UN deal has the quorum to form a national unity government.

For now, the strategy seems to be “let us get as many people to sign the deal and maybe later others will join”.

What if they don’t? And what if the international community goes ahead with installing a new government that is not supported by all the armed groups on the ground? Who will defend the new government?

“I don’t think the West is ready to put boots on the ground,” said Arturo Varvelli, head of the terrorism research programme at the Institute for International Political Studies.

A deal without Libya’s main political and military actors could be a recipe for even more violence.