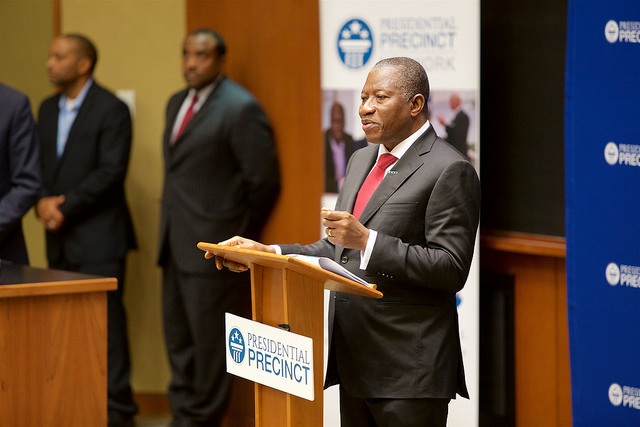 As part of its mission to promote democracy globally, the Precinct convenes leaders from many different backgrounds, religions, and political systems. Following the examples of Presidents Jefferson, Madison, and Monroe, we at the Precinct are interested in exploring knowledge and ideas no matter where they may be found or who may promote them. In the words of Thomas Jefferson “For here we are not afraid to follow truth wherever it may lead, nor to tolerate any error so long as reason is left free to combat it”. The Precinct’s most recent visitor was Goodluck Ebele Jonathan, president of Nigeria from 2010 to 2015. President Jonathan hopes to continue serving Nigeria and Africa by establishing institutions that can effect meaningful change. Jonathan was the first President in Nigeria’s history to peacefully concede the results of a democratic election and to relinquish his position in office to the opposition. The peaceful transfer of power was an original goal of the American founding fathers. It was fitting that President Jonathan chose to begin planning a private Foundation and his post presidential role by coming to the Presidential Precinct in Virginia for advice. President Jonathan spent nearly a week, November 8-13, 2015, at the Presidential Precinct, meeting with academic, government and business leaders and sharing his experiences with local experts. Here he discussed with them ideas for bringing peace and economic development to Africa. He also used the opportunity to work with specialists to hone his Foundation’s message. Opening his visit, President Jonathan was introduced to the Presidential Precinct Board of Directors at the University of Virginia’s Morven Farm. The reception was chaired by Jim Murray, Presidential Precinct Chairman. President Jonathan then took advantage of the opportunity to visit all the Precinct partnering sites including James Monroe’s Ash Lawn-Highland, Thomas Jefferson’s Monticello, and James Madison’s Montpelier. While at Monticello, President Jonathan was joined by local and international business leaders for dinner at Monticello’s Montalto. President Jonathan went on through a series of public and private meetings in which he expounded  upon his refined vision for the newly created Goodluck Jonathan Foundation. The Precinct enabled him to exchange experiences with those sharing his interest in democracy and his new mission to promote good governance. https://youtu.be/SJpvB_byyqc President Jonathan went on to visit William & Mary where he met with Law School faculty to talk about democracy, the rule of law and international human rights. While on campus, President Jonathan also joined library leadership and other William & Mary faculty for a breakfast at Swem Library where social entrepreneurship and civic engagement challenges were discussed. A high point of President Jonathan’s visit to William & Mary was a meeting held at the Institute for the Theory and Practice of International Relations (ITPIR) and AidData. There President Jonathan learned about W&M’s groundbreaking work in Africa on Foreign Aid and Development. He also had an engaging lunch meeting with a small group of students and faculty from William & Mary’s Africana Studies program, where President Jonathan spoke about his Pan-African vision and fielded questions from the faculty and students. Everything from LGBT rights to building power grids and infrastructure were openly discussed. 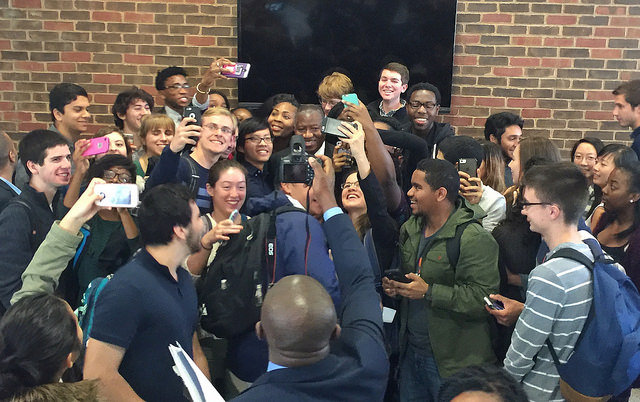 President Jonathan returned to Charlottesville Friday morning to give pre-prepared remarks about his post-presidency plans to more than 300 academic, business and government leaders. Jonathan envisions four post-presidential goals: to develop the private sector economy and to create jobs for young people; to promote good governance by encouraging credible elections and stable transitions throughout Africa; to unite African leaders, both young and old; and to establish the Goodluck Jonathan Foundation to promote these goals. In the course of his closing speech, President Jonathan explained that when he was a boy in elementary school in rural Nigeria, everyone was taught that Africa was “the dark continent.” He explained that it was his hope to turn that around and ensure that Africa becomes the next great frontier for world growth – effectively, “the bright continent.” The crowd appeared to embrace President Jonathan’s goals with enthusiasm. https://youtu.be/9Fsc8Py3PxM President Jonathan’s visit was facilitated by Presidential Precinct board member Francois Baird.  Presidential Precinct Managing Director Neal Piper was the mission leader. The visit was supported by the Presidential Precinct partners: College of William & Mary, University of Virginia, Morven Farms, Monticello, Montpelier, Ash Lawn-Highland *Source Presidential Precint]]>