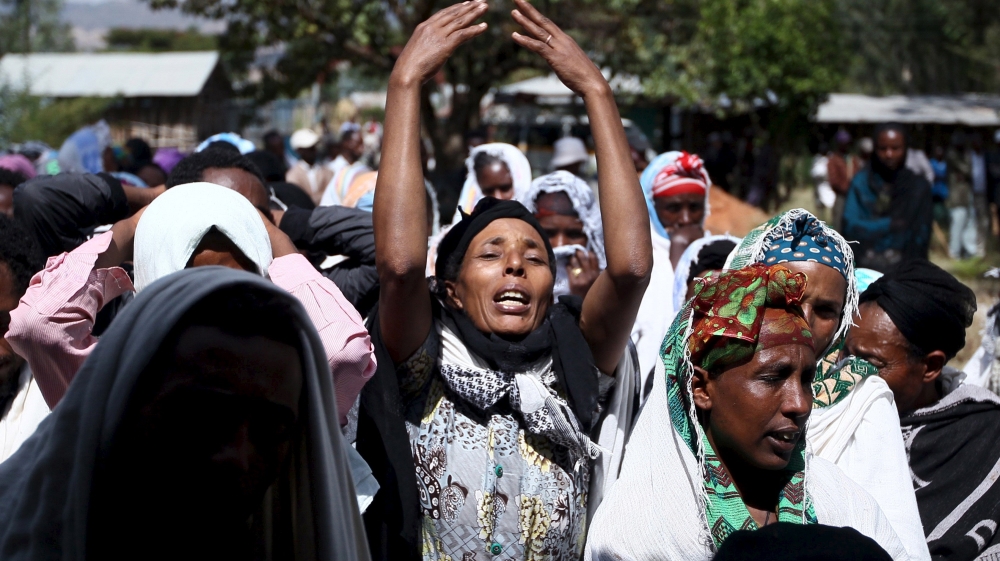 The international community needs to pressure the Ethiopian government to halt land grabs and respect human rights, an opposition party leader has said after two prominent opposition members were arrested for inciting protests in Oromiya earlier this week.

Oromiya is the largest region in Ethiopia. Groups such as the OLF, accuse the ruling Ethiopian People’s Revolutionary Democratic Front (EPRDF) coalition of marginalising ethnic Oromos.

Bekele Nega, secretary of the Oromo Federalist Congress (OFC), said security forces have killed at least 86 people since protests began earlier this month over government plans to create an investment and industrial zone near the capital, Addis Ababa.

“They have killed 86 and wounded thousands [and are] imprisoning people and political leaders including our vice-chairman Bekele Gerba,” Nega told Al Jazeera.

“They suspect that our party and some of our members are part of the protest movement, that we have been inciting the demonstrations,” he told Reuters news agency, denying that the OFC had incited violence.

“We do not know when Bekele and Dejene will be released or be charged for anything.”

Hailemariam Desalegn, Ethiopia’s prime minister, told parliament on Friday that people had a legitimate right to oppose Addis Ababa’s plan, but that the government would take “unflinching measures” against those who incite violence.

The government has accused the secessionist Oromo Liberation Front (OLF) and opposition group Ginbot 7 of involvement in the protests. Both organisations are regarded by the state as terrorist entities.

Amnesty International, the human rights monitor, said earlier in December that protesters have been labelled “terrorists” by Ethiopian authorities “in an attempt to violently suppress protests against potential land seizures”.

The Ethiopian government has neither released an official death toll nor confirmed how many people were arrested since the protests started.

Betsate Deneke, the head of the the Human Rights Council (HRCO), said his organisation was currently collecting information on how many were killed and would announce their findings next week.

He told Al Jazeera that HRCO demanded an “impartial investigation into the killings of people” takes place.

Earlier this week, the opposition said the government had rejected, for the second time, an application to hold a public demonstration on December 27 to protest against the Addis Ababa Master Plan.

Four out of five Ethiopians still live in rural areas even though the country has witnessed tremendous growth over the past 10 years.

Ethiopia has also faced significant criticism for forcibly removing tens of thousands of people from their homes to make way for large scale commercial ventures, often to the benefit of foreign investors.