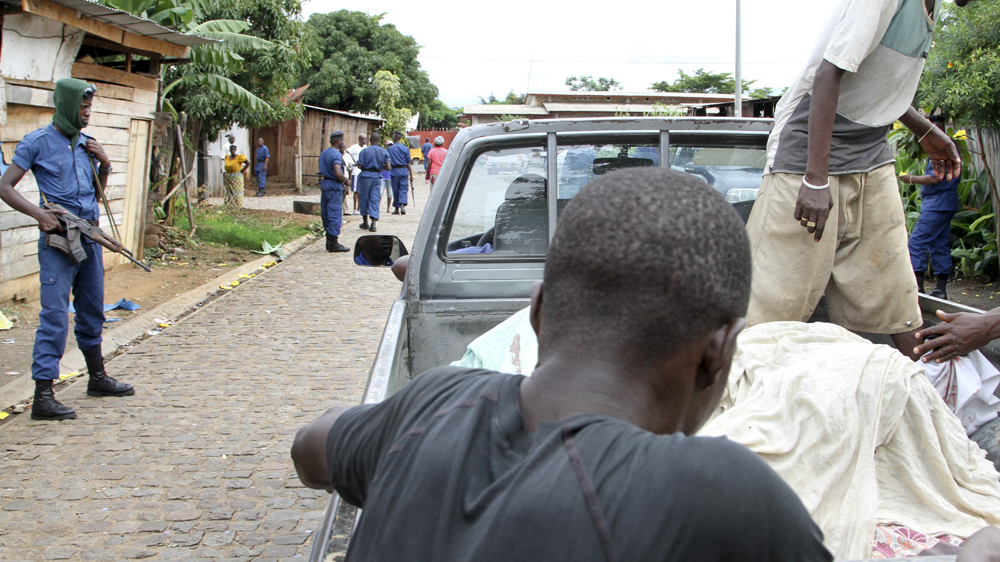 Burundi’s political violence escalated on Saturday with dozens of people found shot dead in the capital, a day after the government said an unidentified group carried out coordinated attacks on three military installations.

A climate of fear has engulfed Bujumbura after the sound of battle could be heard throughout Friday and sporadic gunfire overnight. Residents hid in their houses leaving only security personnel patrolling the streets.

“Residents say people wearing police uniforms came into residential areas that have been hotbeds of protest. Residents believe these killings were a response to Friday’s attacks on the military,” reported Al Jazeera’s Malcolm Webb, who spoke to eyewitnesses in Bujumbura.

“The bodies of dozens of civilians were on the street – most of them young men – many appear to have been shot at close range,” said Webb.

An eyewitness told The Associated Press he counted 21 bodies with bullet wounds in their heads in the Nyakabiga neighbourhood on Saturday morning.

Some of the dead had their hands tied behind their backs.

Police spokesman Pierre Nkurikiye said there were “no collateral victims” during Friday’s clashes.

“All the deaths were attackers killed in the joint sweep operation of the army and police,” Nkurikiye said. “The enemy was neutralised.”

Three soldiers were killed in the pre-dawn raid Friday by an unidentified group in the Ngagara, Musaga and Mujejuru areas, two soldiers who insisted on anonymity for fear of reprisals told AP.

The army killed 12 of the attackers and 20 others were arrested, including one who was wounded and is being treated at a military hospital, army spokesman Gaspard Baratuza told state radio.

The violence is linked to President Pierre Nkurunziza’s third term in office, which many Burundians and foreign observers had opposed as unconstitutional and in violation of a peace accord. The treaty ended a civil war in which 300,000 people were killed between 1993 and 2006.

At least 240 people have been killed since April and about 215,000 others have fled to neighbouring countries, according to the United Nations.

Several hundred people have also been imprisoned for opposing Nkurunziza’s re-election in July this year.