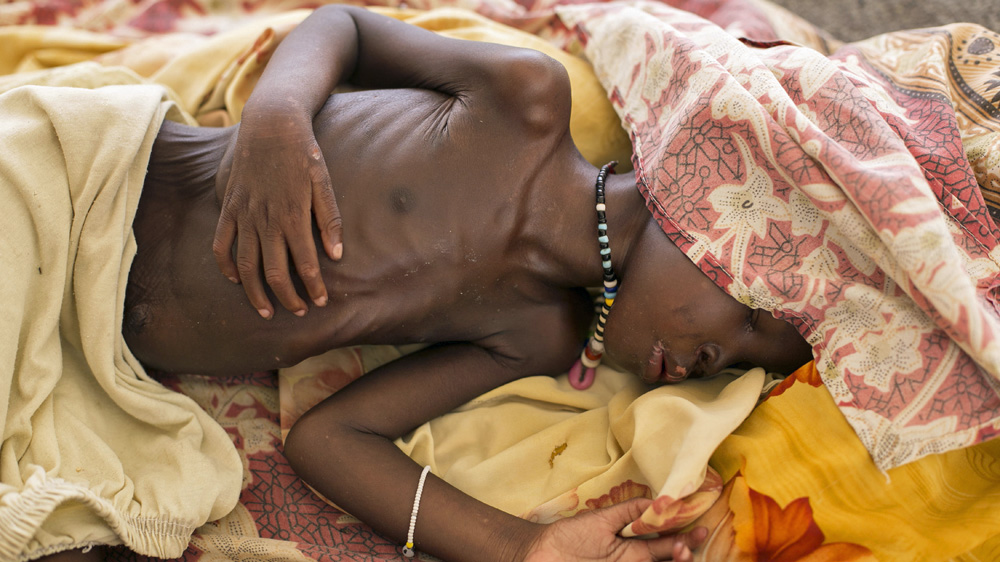 More than two years after the outbreak of civil war in South Sudan, tens of thousands of South Sudanese face starvation, say NGOs.

More than a third of South Sudan’s population are classified as “severely food and nutrition insecure,” an 80 percent increase compared to 2014, according to the latest Integrated Food Security Phase Classification (IPC) report, published in late November. This includes 40,000 people in war-torn Unity State who face “catastrophe”.

“Hundreds of thousands of South Sudanese face a critical food shortage,” Juerg Eglin, the head of the International Committee of the Red Cross (ICRC) in South Sudan, said in a statement on December 11.

“At least 30,000 people are living in extreme conditions and are facing starvation and death,” according to a joint statement by the UN Food & Agriculture Organisation (FAO), the UN’s Children’s Emergency Fund (UNICEF) and the World Food Programme (WFP).

Of the 3.9 million people classified by the IPC as severely insecure, 3.1 million are in “crisis”, 800,000 in “emergency” and 40,000 are facing “catastrophe”, which is also known as Classification Phase 5, the same severity as famine.

“Of extreme concern are the estimated 40,000 people in Unity State who were projected to be experiencing catastrophe,” said the IPC report.

“The situation is likely to deteriorate into famine in the absence of urgent and immediate humanitarian assistance.” According to the IPC definition, “catastrophe” becomes famine if spread across a region or entire population.

War broke out in South Sudan when a political dispute between the president, Salva Kiir, and former vice president, Riek Machar, spilled over into a conflict with a strong tribal dimension. The conflict began barely two years after the nation gained its independence from Sudan following five decades of civil war.

The catalyst for the latest war was a skirmish in the presidential guard on December 15, 2013. Since then, the conflict has claimed tens of thousands of lives, displaced more than 2.3 million, and left almost 5 million in food insecurity. More than half of those displaced are children, according to the UN Children’s Fund, UNICEF.

A peace agreement was signed by the warring parties in August, but has failed to put an end to the fighting.

“The security situation … remains volatile with continual violations of the peace agreement,” according to the latest UNICEF report.

The cumulative impact of two years of conflict is taking a heavy toll on the food security of South Sudan’s citizens. Not only have millions been displaced from their homes, but the crops on which their survival relies have gone unplanted, unharvested or destroyed, cattle have been stolen, killed, or have died from disease, and the market economy has collapsed.

“The country is split into two worlds: the areas affected by the conflict and the rest of the country,” said Mario Zappacosta, an economist at the Food and Agriculture Organisation (FAO) in South Sudan.

“The areas affected were not self-sufficient even in the good years. Humanitarian assistance was the only way to avoid a disaster there,” explained Zappacosta.

“Last year we had the problem that planting was limited in conflict areas. Now it seems that the vast majority of animals have been looted, so people are moving from the conflict areas with virtually no means of subsistence. They are relying on wild fruits and fishing from the swamps,” Zappacosta said.

‘The worst year ever’

By the middle of the year, almost 100,000 cattle had been gathered in Bentiu, the capital of Unity state – a combination of cattle owned by those aligned to the government and the spoils of the conflict in southern Unity in the spring.

“Unity is facing a minor disaster because there aren’t any cows,” said a South Sudan researcher speaking on condition of anonymity for security reasons. “Unless there is restitution, but that is difficult because half the cows have died of disease. You can’t put 100,000 cows in a city – they die.”

With crops and cattle decimated, the risk of a widespread famine is increasing.

“Compounded internal and external factors in South Sudan make it probably the worst year ever,” said Layal Horanieh, the ICRC’s South Sudan spokesperson. “Though the declaration of “famine” has not been made, the hunger gap in 2016 is almost certain to start earlier than in 2015. The situation is very bleak.”

Ongoing fighting is not only preventing the return of people to their homes and fields, but also hampering the delivery of aid and any reliable assessment of the severity of the hunger crisis.

“We can say that there are at least pockets of starvation,” said Zappacosta. “But the evidence is based on scattered information.”

If the conflict cannot be halted, the outlook for the coming year is even more desperate.

“A large proportion of the population will remain food insecure through December 2015 and if new shocks occur, their resilience into 2016 will be weakened even further,” according to the IPC report.

Even if the conflict is halted, it will take time for local food sources to be restored.

“The agriculture sector has been weakened by displacement and violence in many areas,” said Layal. “If there is no harvest there will not be food from crops for a full season even if the weapons are put down today.”