Here is a range of precedents over the past 15 years: 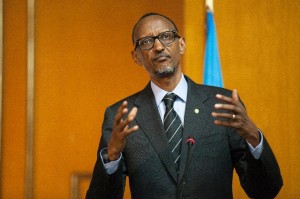 An amendment to the constitution would allow Rwandan President Paul Kagame, 58, to run for an exceptional third seven-year term in 2017 (AFP Photo/Zacharias Abubeker)[/caption]

– BURUNDI: After a constitutional row, President Pierre Nkurunziza won a controversial third term in July 2015, in polls boycotted by the opposition and denounced by the United Nations as neither free nor fair. His re-election bid sparked an attempted coup by rebel generals and months of civil unrest that has killed hundreds and driven hundreds of thousands from the country.

– ZIMBABWE: A new constitution adopted in 2013 allowed President Robert Mugabe, in power since 1980, to stand in an election, which he won.

– DJIBOUTI: In April 2010, Djibouti’s parliament approved a constitutional amendment allowing President Ismael Omar Guelleh, in power since 1999, to run for a third term, which he won in 2011. He is now eyeing a fourth term in 2016.

– ANGOLA: The adoption in January 2010 of a constitutional amendment providing for the election of a president by indirect suffrage, by parliamentarians, allowed head of state Jose Eduardo dos Santos, in power since 1979, to be sworn in in 2012 after his party’s victory in legislative elections.

Other leaders have not managed to impose constitutional changes to remain in power.

– BURKINA FASO: In October 2014, the announcement that long-serving president Blaise Compaore sought to extend his rule beyond 30 years brought hundreds of thousands of protesters onto the streets, forcing him to step down.

– ZAMBIA: Frederick Chiluba had to throw in the towel in 2001 under popular pressure, and in MALAWI, the parliament in 2002 blocked Bakili Muluzi from seeking a third mandate in 2004. – NIGERIA: Military ruler turned democrat Olusegun Obasanjao failed in his 2006 effort to change the constitution to allow him a third term in power. – Still trying –

– THE REPUBLIC OF CONGO: Veteran Congo ruler Denis Sassou Nguesso’s government on October 27, 2015 claimed a landslide victory in a referendum on changes to the constitution that would make him eligible to contest elections next year, extending his three-decade stay in power.

– THE DEMOCRATIC REPUBLIC OF CONGO: President Joseph Kabila inherited his post after his father, Laurent-Desire Kabila, was killed in January 2001. The opposition believes Kabila will try to circumvent the constitution and run for a third five-year term in 2016.