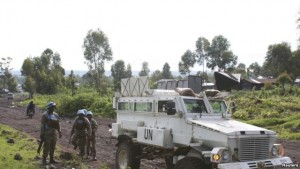 South African peacekeepers patrol the streets of Goma in the eastern portion of the Democratic Republic of the Congo, Dec. 2, 2015[/caption] Christmas came early Wednesday in the form of gifts and praise for hundreds of South African peacekeepers in the Democratic Republic of the Congo struggling to make an impact in the face of its chaotic and confusing politics. With pressure on budgets, troop rotations have been extended from six months to a year for the contingent, part of a 20,000-member U.N. force in the vast central African state, the biggest such U.N. operation in the world. Besides the tropical heat, threats from disease and a myriad of AK-47-toting rebel bands in the jungle-clad hills along the border with Uganda, Rwanda and Burundi, the peacekeepers also grapple with the frustration of being prevented by byzantine Congolese geopolitics from doing their job. In recognition of the tough times, senior South African government officials and military brass flew in personally Wednesday to deliver gifts worth 2 million rand ($139,631) to the troops. They also heard words of thanks from South African leaders, who see the deployment as a key part of Pretoria’s diplomatic engagement with the rest of the continent. “Keep up the good work,” Major General Barney Hlatshwayo, the South African military’s chief of operations, told the troops gathered in a huge helicopter hangar at Goma airport. “We really appreciate the work that you are doing. Some of you have been here for six months, some will be here for a year, but that is the sacrifice you make.” ‘Peace’ mandate When it came into being in 2013, the Force Intervention Brigade of 3,000 South African, Tanzanian and Malawian troops enjoyed an unprecedented “peace enforcement” mandate to take out the many rebel groups — some of them with roots in the 1994 Rwandan genocide — that have been roaming the region’s fertile, mineral-rich but lawless hinterland. In one notable initial success, FIB soldiers backed by state-of-the-art South African helicopter gunships helped wipe out the M23 rebel militia. The M23 was widely believed to be a Rwandan proxy carving out a buffer zone along the border of its larger neighbor. This week, South African helicopters struck Ugandan Islamist fighters from another group, the Allied Democratic Forces, after attacks last weekend in which dozens of people were killed. However, such operations are becoming few and far between, a consequence of the D.R.C. government’s reluctance to approve offensives against armed groups with whom it tacitly shares common ground — in particular a distrust of Rwanda, according to military and diplomatic sources. South African and Congolese forces were meant in February to start tackling the FDLR — a group of up to 1,500 fighters led by Hutu militiamen behind the Rwandan genocide who then fled into Congo — but precious little headway has been made. “The FDLR in particular, the D.R.C. government are sympathetic toward them,” one senior military official in the regional capital, Goma, told Reuters. A foreign diplomat in the Congolese capital, Kinshasa, who asked not to be named, concurred. “It’s frustrating,” the diplomat said, questioning the commitment of senior Congolese generals to eradicating the militias. “These guys are not serious. They make you get down on your knees to beg to help them.” The Kinshasa government has repeatedly rejected assertions that it is not serious about countering FDLR, and says its own operations against the group this year have cut its numbers to fewer than 400 fighters. *Reuters/VOA]]>