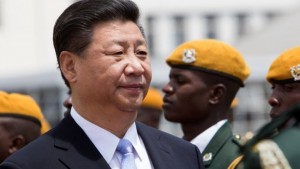 China and South Africa have signed deals and loans valued at $6.5bn (£4.3bn), with the focus on building infrastructure in the African giant.

The deals were announced during a four-day visit by Chinese President Xi Jinping to increase trade and investment between the two countries. About 26 deals were signed on Wednesday, with $2.5bn going to South Africa’s state-owned rail operator. China has given a series of loans to African countries for development. The countries, in turn, provide oil and other key commodities to the world’s second largest economy. But recent slowing demand from China has hurt trade in those African countries reliant on its exports. Chinese investment in Africa plunged 40% in the first half of the year, according to China’s Ministry of Commerce. President Xi’s visit has been viewed as a move to reassure African nations that China’s slowing growth would not limit its investment in the continent.

A $500m loan to South Africa’s state power company to improve nuclear co-operation, along with plans to build a car manufacturing plant in the country were among the deals announced. Ahead of Mr. Xi’s visit, Chinese and South African firms had already announced $930m in investments in metal, energy and pharmaceutical sectors. Mr Xi’s Africa tour began on Tuesday in Zimbabwe, where he pledged loans to boost the struggling economy. He will also co-chair a two-day China-Africa cooperation summit in Johannesburg on Friday, where several heads of the continent’s countries are expected to attend. Reports suggest that Nigeria’s President Muhammadu Buhari will ask Mr. Xi for loans to fund rail and power projects as the oil-exporting economy deals with falling prices. The summit could result in billions of dollars in new loans for African nations. *Source BBC]]>