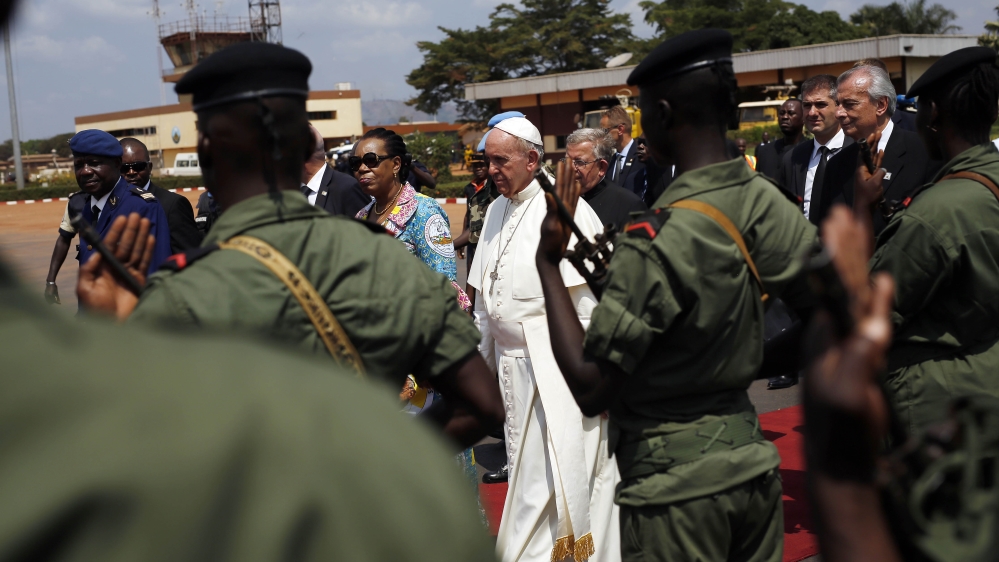 The Central African Republic (CAR) will not be safe enough to host a free and fair election at the end of this month, a leading African think tank has said.

David Zounmenou, a senior researcher at the Institute of Security Studies (ISS), told Al Jazeera that authorities are neither prepared to provide security nor able to guarantee all eligible voters would be represented on the voters’ roll.

“There is no way disarmament of the militia groups would be complete by December 27, and by all indications, I think elections will take place in March 2016,” Zounmenou, of the ISS’s African Security Analysis Programme, said.

“Some external partners, like France, are pushing for the elections to take place, to get the country out of this stage and get the issue out of the way, but i believe this transitional government will be here for a while.”

As of now, the country is scheduled to host a referendum over the constitution, while legislative and presidential elections are set for December 27, with a run-off set for late January 2016. But if elections are delayed, it would be at least the fifth time that elections in the country would have been postponed in CAR in 2015 alone.

Dismissing speculations of a possible poll delay, Diane Corner, UN assistant secretary-general, told Al Jazeera that the Economic Community of East African States (CEEAC) leaders had agreed on a technical extension of the political transition period till March 31, 2016, at the latest.

“This will allow the current electoral timetable to be completed comfortably,” said Corner, who is also the special representative and deputy head of the UN’s Multidimensional Integrated Stabilisation Mission in the Central African Republic (MINUSCA).

“Even if the referendum over the constitution is not delayed, it is already an absurd situation,” Thierry Vircoulon, project director for central Africa at the International Crisis Group (ICG), said.

“The constitution hasn’t been distributed and so if they do vote for a new constitution, it would be for something the majority haven’t even seen,” Vircoulon said.

CAR has been beset with political instability since March 2013 when Seleka rebels overthrew President Francois Bozize in a coup.

The coup ignited a horrific communal war between the Muslim and Christian communities across the country, as militias and rival militias, set out to destroying infrastructure, churches and mosques in a country already ravaged by incessant poverty and underdevelopment.

Some 20 percent of the population are said to have been internally displaced or forced to flee as refugees to neighbouring countries.

According to Human Rights Watch, in Bangui, the Muslim population has dwindled from 122,000 to 15,000. The severe level displacement has also raised questions over the validity of a vote where so many have yet to make the voters’ roll.

“It is unclear how many villages, towns and people were included on the voters’ roll, there is a lot of speculation and suspicion over that part of the process,” Vircoulon said.

On Tuesday, the French medical charity, Doctors without Borders (MSF) said the continued insecurity remained a barrier towards alleviating the ongoing massive humanitarian crisis in the country.

Thierry Dumont, MSF’s head of mission in the Central African Republic, described the public health facilities as “nonfunctional” and medicine as “inaccessible luxury for the vast majority of inhabitants”.

He added that the political uncertainty and sporadic violence was ‘paralyzing the economy’ and making it very difficult for health professionals to do their job.

Dumont said NGO’s simply did not have the capacity to perform all of CAR’s health needs.

But Zounmenou, from the ISS, says that though an election would assist in restoring legitimacy to the government and help build stability and defence against intrusions, it would take a long time before the work of agencies and NGO’s could be replaced by that of the state.

“What happens after elections will be a daunting task for anyone.” Zounmenou said.

Bangui experienced a wave of violence since September 26, when a Muslim motorcycle taxi driver was killed.

The incident catalysed new attacks in the city, resulting 100 deaths and 500 others injured. More than 44,000 were also newly displaced. The capital has often been at the centre of horrific violence, though it is in the rural areas where the lawlessness is most acute.