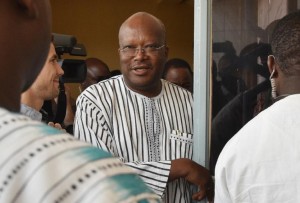 Burkina Faso’s president-elect Roch Marc Christian Kabore’s Movement of the People of Progress (MPP) won 55 of 127 seats in the November 30 polls The party of Burkina Faso’s president-elect Roch Marc Christian Kabore came first in the west African country’s parliamentary vote but fell short of winning an absolute majority, according to official results announced on December 2, 2015. After securing 55 seats out of 127 in Sunday’s election, Kabore’s Movement of the People of Progress (MPP) must now seek coalition partners in order to form a government. (AFP Photo/Issouf Sanogo)[/caption] Ouagadougou (AFP) – A year after an uprising toppled Blaise Compaore after he led Burkina Faso for 27 years, the people of the west African country have elected a new leader whose deep ties to the old regime make many doubt the prospects for real change.

President-elect Roch Marc Christian Kabore had a succession of strategic jobs under Compaore before falling out of favour just 10 months before the insurrection of October 2014.

Kabore, whose Movement of the People of Progress (MPP) won 55 of 127 seats in the November 30 polls, has vowed a “total break with the old regime”.

But some observers see him and his entourage as opportunists.

Kabore was a leading figure in the ouster of a president whose bid to seek a further term in office brought the people out into the streets until he quit.

After a turbulent year marked by a foiled coup led by a general loyal to Compaore, Kabore won outright in the first round of polling. With 53 percent of the vote, he trounced his main rival Zephirin Diabre, who garnered just under 30 percent.

Compaore’s Congress for Democracy and Progress (CDP) party, once the state political machine, took 18 seats in the new parliament.

The scale of Kabore’s win showed that he could rally supporters of the old leader as well as part of an opposition keen for change.

“We perhaps need to turn the question around to understand,” a diplomat suggested. “Would there have been a popular insurrection and the downfall of the regime without Roch and the MPP?”

“People have made a myth of the uprising, as if it were purely a popular movement that rose up in the street and hadn’t been organised and guided by Diabre and Kabore,” another diplomat said.

“The Burkinabe people made the rational choice to manage affairs after Compaore,” said Salam Kassem, a political scientst at the University of Ouagadougou. “They opted for Roch because they don’t want a dramatic break…. They didn’t want to take too many risks.”

Abdoul Karim Saidou, another political expert who serves as interim executive secretary at the Centre for Democratic Governance, argues that Kabore’s MPP behaves much like the CDP.

“These are people who have a powerful electoral machine. They use the same tactics as if they were in the CDP: money and T-shirts. Such a machine can only crush all in its path,” Saidou said.

For hip-hop musician Smockey, a founder of the Citizen’s Broom movement that spearheaded the 2014 uprising, the Kabore “scenario isn’t surprising, even if it’s not the choice of a certain young majority that considers he was too tied up in the running of the old regime.”

But at least “there was no cheating,” Smockey added.

“Now, whether he came from the old government or not … it’s important to maintain some form of counterbalance to authority to force the powers that be to respect their commitments. If we let this balance disappear, we run the risk of bringing back the old ghosts,” the singer argued. 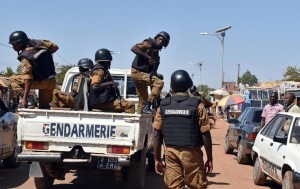 Burkina Faso deployed 25,000 members of the security forces to keep the peace during the election (AFP Photo/Issouf Sanogo)[/caption]

Like many others in the old opposition, the artist believes that Kabore must prove his good faith by allowing prosecutors to pursue cases such as the 1998 murder of investigative journalist Norbert Zongo and the foiled coup led by Compaore’s ex-chief of staff, General Gilbert Diendere, in September this year.

Diendere has separately been charged with murder in a probe into the 1987 murder of revolutionary leader Thomas Sankara during the coup that brought Compaore to power, an official in the military prosecutor’s office said Monday. Such cases concern many figures from the old regime and reopening them after years of taboo will be “a real indicator as to whether things are changing”, said a veteran observer of the country’s affairs.

Smockey added: “In most cases of economic crimes and blood crimes, (the state) must be firm. Those who have sinned” should be brought to justice.

“Without being naive,” the musician added with his rapper’s flair, “we’ve come back from a long way. The people have placed the democratic locomotive on the track, it’s up to the passengers to be sure that the destination is the right one.”