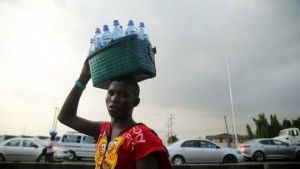 China emerged from chaos 35 years ago to become perhaps the largest economy in the world. The BBC’s Martin Patience – who has just moved from Beijing to Lagos – asks if Nigeria can do the same.

Swapping Asia’s giant for Africa’s powerhouse can be a disorientating experience. Leaving Beijing to go and live in Lagos is not a well-worn path. But both Nigeria and China are the most populous countries and biggest economies in their respective continents, making them ripe for comparison. I feel I’ve left behind the grey, imposing order of Beijing for the chaos and colour of Lagos, where fun and frustration are doled out in equal measure. Part of the correspondent’s condition is that your ears prick up at the slightest mention of a previous posting. Imagine my surprise then when, watching last month’s inauguration of the new Nigerian cabinet, a remark about the Great Wall of China cropped up during the opening address. The point, I believe, that the official was trying to make was that the Great Wall was not in itself enough to protect China from invaders – the government and people need to be incorruptible as well. I say believe because the audio on the state broadcast briefly cut out. In China, an audio glitch at such an important event would cause heads to roll in shame. In Nigeria, people roll their eyes and shrug it off. It is just one small example of how the Chinese are known for getting things done, while in Nigeria there is a reputation for cutting corners. [caption id="attachment_22851" align="alignright" width="300"] 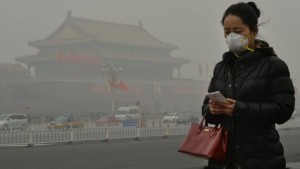 Beijing’s smog is one of the downsides of rapid development[/caption] Whereas Beijing is a city of smog (the killer downside to the country’s breakneck development), Lagos is a city of generators (the sound of a nation failing to realise its economic potential because it can’t get its power grid in order). But when it comes to business, Nigeria and China are alike in one inspiring and infectious way. Both possess an extraordinary entrepreneurial spirit, a can-do-attitude, that if you want to build something you’d better do it yourself. From street hawkers and small shop owners, to CEOs of large companies, people here survive and, occasionally, flourish despite all the obstacles. As for a journalist operating in Nigeria, there is one major difference. In China, people would shut down at the sight of a foreign journalist, silenced by government repression. In Nigeria, people and politicians don’t shut down, they unload. They talk and talk, and talk some more – they love it. Everyone seems to have an opinion on everything. For a journalist this is both a joy and, as I am beginning to discover, a bit of a nightmare. In China, people and particularly officials said barely anything, so you would spend hours parsing the meaning. In contrast, in Nigeria you feel you are drowning in information and quotes. Working out what is actually true can be just as time consuming. When I talk about China to Nigerians, there is an awe and respect that I have heard in many other developing countries about China’s remarkable economic achievements in the past three decades. And, interestingly, while in China the dizzying pace of change has now left many feeling unfulfilled by their material gains, in Nigeria there is a suffocating sense of people wanting meaningful change. Nigerians want to see infrastructure built, they want better schools and hospitals, and, perhaps, most importantly, they want jobs to better themselves. They want a government that will build and not pilfer. The Nigerian writer Chinua Achebe once wrote that there was nothing basically wrong with the Nigerian character. The author blamed the country’s ills squarely on a failure of leadership. [caption id="attachment_22852" align="alignleft" width="300"] 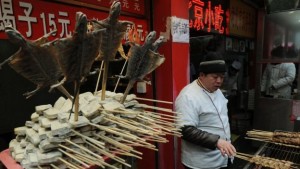 You can see the same entrepreneurial spirit in street hawkers in Beijing and Lagos[/caption] “The Nigerian problem is the unwillingness or inability of its leaders to rise to the responsibility, to the challenge of the personal example, which are the hallmarks of true leadership,” he wrote. There is now a sense that Nigeria could be at a turning point. Just as 1979 marked the start of China’s economic transformation, many Nigerians hope that 2015 will be the beginning of a new era for their country. They are placing their faith in the former army general they have elected leader, President Muhammadu Buhari. With his no-nonsense style, he has already told his countrymen that they are too “unruly” and need to learn how to queue properly. In a nation where politicians are notorious for plundering state coffers, Mr Buhari has a reputation for unimpeachable honesty and integrity. People now believe that he will get roads and bridges built (rather than the money being stolen by corrupt officials) which in turn will help get the economy moving. With almost two million Nigerians entering the job market every year, the country faces a demographic dividend or a demographic disaster. One man is shouldering the expectations of millions. But can Mr Buhari pull it off? Evidence might suggest otherwise. But then remember China. Thirty-five years ago the country was emerging from the chaos of the Cultural Revolution. Now, by some estimates, it is the largest economy in the world. With the right leadership, countries can be transformed. *BBC]]>