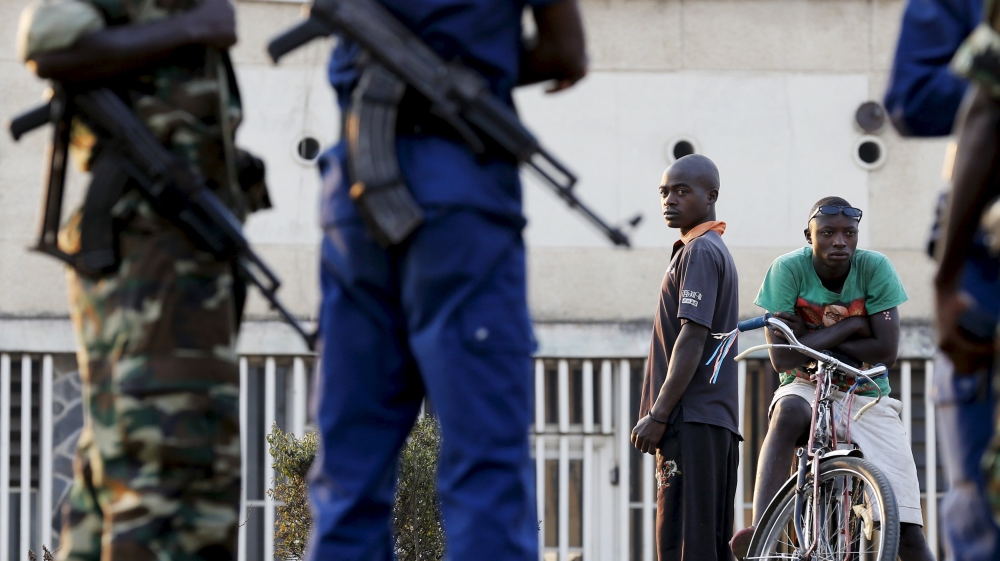 Burundi’s government has reacted angrily to the African Union’s decision to deploy a 5,000-strong peacekeeping force to curb ongoing violence in the troubled country, saying it will prevent foreign troops from entering its borders.

The African Union’s Peace and Security Council agreed on Friday night to deploy an African Prevention and Protection Mission (MAPROBU) for an initial period of six months – primarily to protect civilians after months of political violence following the disputed re-election of President Pierre Nkurunziza in July.

The MAPROBU force is mandated to “prevent any deterioration of the security situation” as well as to protect civilians and “contribute to the creation of the necessary conditions for the successful holding of the inter-Burundian dialogue.”

Nkurunziza’s spokesman Gervais Abayeho told Al Jazeera on Saturday, however, that Burundi does not need a peacekeeping force.

“We will not allow foreign troops in Burundi. We don’t need them,” Abayeho said.

“We have a legal and democratically elected government that should be consulted before making such decisions.

“We are a troop-contributing country to several African Union peacekeeping missions in Africa and now they want to bring peacekeepers to our country? Why don’t they just return our troops if they think we need help here?”

The African Union gave the Burundi government 96 hours to cooperate fully and accept the deployment of peacekeepers, warning that it reserved the right to enforce its decision to send in forces – as per its charter.

Al Jazeera’s Mohammed Adow, reporting from the capital Bujumbura, said the fallout of the political crisis is seriously damaging the economy of one of the poorest countries in the world.

“Unemployment is on the rise and and so are the prices of basic goods,” our correspondent said.

“For the first time since the end of Burundi’s civil war a decade ago, the economy is set to contract – a result of months of upheaval.”

At least 87 people were killed last week in the African nation in the worst violence in months linked to President Nkurunziza’s disputed third term.

The 47-member Human Rights Council approved by consensus on Thursday in Geneva, Switzerland, a text that calls for the UN human rights chief to send in a mission of experts who are to report regularly on the rights situation in Burundi.

At least 400 people have been killed since protests against Nkurunziza’s third presidential term started in April, and nearly 3,500 have been arrested in the political crisis, according to UN figures.

The surge in violence has raised fears of a return to civil war, a decade after the end of a 1993-2006 conflict between rebels from the Hutu majority and an army dominated by minority Tutsis, which left 300,000 people dead.

Ban Ki-moon, the UN secretary-general, gave warning earlier this week that Burundi was on “the brink of a civil war that risks engulfing the entire region”.