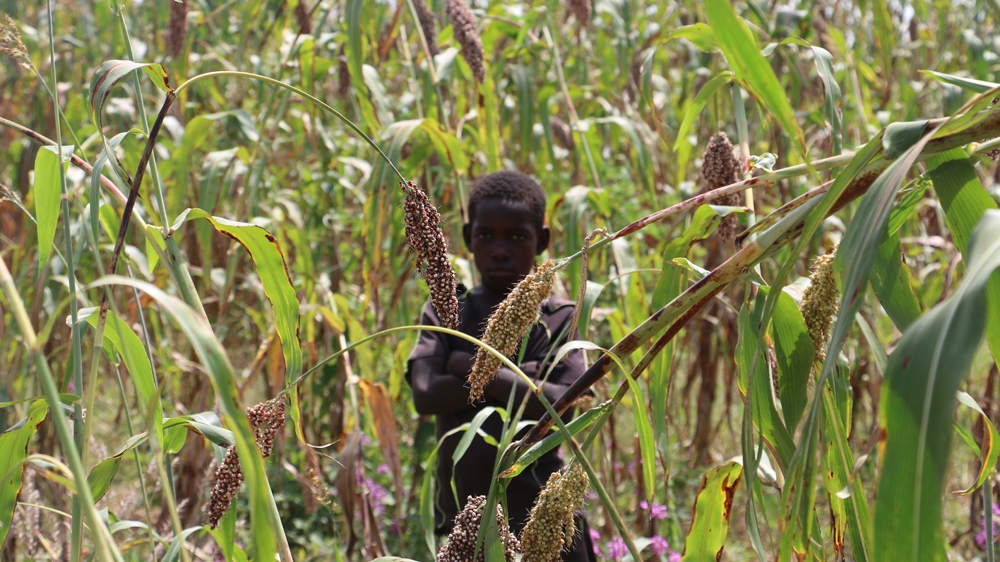 Bilanga, Burkina Faso – Facing a towering wall of yellow stalks bowing under the weight of grain, Lankoande Francois swings his machete and the drying strands fall to the ground. His wife follows close behind. Her feet crackling the kernels as she swiftly leans in to the gather dark brown beads of sorghum that will feed their family. The midday heat has reached 40C and the light is harsh. There is little shade under the trees’ scorched, outstretched branches. Lankoande pauses a moment and lifts his worn cotton shirt to wipe the sweat from his weary but youthful face.

Here, in the north of Burkina Faso, the land which meets the Sahel is an empty, vast horizon of ochre dust. A year ago, the patch of green land Lankoande is now harvesting was the same as the barren earth which surrounds it. The other farmers have abandoned it, he says, heading south in search of a more forgiving way of life. He, however, refusing to leave his home sought another way.

A year ago a farmer from a neighbouring town came to Lankoande’s village and demonstrated a few agroecology techniques. Curious about the idea Lankoande gathered rocks to build contour lines that trap the little rain that falls on his land and dug small pits of organic manure called zai pits to help seeds germinate in the rock-hard soil. He began to prune trees so that they provide shade without taking too much of the precious water his crops need. The risk paid off. This year he has managed to grow enough food to keep his family in the Bilanga village for another season and he’s been able to harvest enough to be sold in the market of Fada N’Gourma, more than three hours away.

Though Lankoande was born into this harsh land and has worked alongside his brothers and mother since childhood, these agroecological techniques were unfamiliar to him. Agroecology which finesses traditional farming techniques with scientifically researched concepts, has one simple aim: to help farmers grow more healthy food by rehabilitating their land using sustainable techniques.

Food out of reach

Far from the Lankoande’s rural farm are the western industrial food businesses dominating the agricultural sector. These large scale companies rely on monoculture, or single species, crops and massive amounts of chemicals, fertilizers and consume water and fuels at unsustaible rates. Despite their scale they aren’t feeding everyone. According to the 2015 figures from the Food and Agriculture Organisation (FAO), there are 795 million hungry people in the world and 98 percent of them live in developing countries. Industrial agriculture may have helped grow more food for the world but it has placed that food out of the reach of the most impoverished.

In contrast, a defining feature of agroecology is that it embraces small-scale and decentralised solutions to food security and shuns industrial farming. “Industrial farming is not the solution at all. I don’t believe in it,” says Fatou Batta who works with the Association Nourrir Sans Detruire (ASND) and another NGO called Groundswell International.

“I believe in investing in small-scale farming and family farming because they are effective and sustainable and they can really feed the world.”

In another village, south of Fada N’Gourma, called Gayeri, Tambiga Pomougou stands out in her bright pink shirt and a simple green head wrap. Her face is stoic and adorned with tribal markings on her cheeks. Tambiga gestures to her healthy field of millet which she planted using a variety of agroecological techniques including zai pits and contour lines. “I found the technique[s] to be very effective,” she says in the local dialect. “Just this year I went to many of my neighbour’s farms and I trained them how to do this,” she adds.

Today, near Tambiga’s field, an agroecology demonstration conducted by ASND is taking place and it seems that every time the volunteer farmers swing their axes into the solid earth, another small group of people have gathered under thorny trees to watch and learn. Children edge closer carrying younger siblings, quiet in the stifling heat but eager to get a glimpse of the afternoon’s entertainment.

The farmers bring out their equipment with pride eager to be photographed with their axes and shovels and other unrecognisable tools. One device called an “A frame” is used to map out the contours of their fields. From here farmers can see where best to build low stone walls to trap rain. Rainfall is limited here in Burkina Faso and so firstly, it must be captured with care and allowed to seep into the orange dirt. Any runoff must be controlled to stop it from stripping away the fertile top soil which could make or break a harvest.

The next thing the demonstrator brings out, guided by a confident Tambiga who encourages the women who have gathered to come closer, looks like a wide leaf collector with several spikes at the end. It’s used to draw out the neat, level lines where the zai pits are dug, the demonstrator explains. Essentially a rainwater harvesting technique, the pits have a depth of around 10cm to allow the water to seep into the roots and are sprinkled with a fist full of manure to encourage the soil to regenerate by retaining nutrients. The half-moon is essentially the same as the zai technique but on a much larger scale, both techniques help to boost yield and cut desertification.

A chatty woman with happy bright eyes who has gathered along with the rest of the village explains to us that it was Tambiga who taught her to use zai pits. She now uses the technique and her harvest to feed her family. Women farmers are a key part of tackling the food security challenges that the region is facing because they are often responsible for feeding the family while their husband’s land is geared towards creating a surplus to sell. Consequently, women in Burkina Faso are often given the worst, most infertile land and so anything they can do to improve its quality is of huge value to the entire family. “As they work on their husband’s land, they don’t own any of it and so they get the worst [part],” explains Fatou Batta. “The women are the rehabilitators of the land,” she adds.

‘An investment worth making’

Some believe that through agroecology and support, the small-scale farmers can rival industrial farms and end malnutrition.

Hilal Elver, UN’s special rapporteur on the right to food agrees. In a report released this August, she states: “There is a need to encourage a major shift from current industrial agriculture to transformative activities such as conservation agriculture [agroecology] that support the local food movement, protect smallholder farmers, empower women, respect food democracy, maintain environmental sustainability and facilitate a healthy diet.”

A recent report by International Institute for Environment and Development which assessed existing scientific studies on agroecology found that the farming system leads to greater overall productivity, has a stronger connection to food security and is resilient to climatic changes. And these supporters only echo what many of the farmers in Burkina Faso also say.

Lankoande and Tambiga have worked their land for generations and agroecology has allowed them to hope that their families can stay and farm the land in future. The shift towards agroecological farming is slow and far from complete, even in the drylands of Burkina Faso.

What is clear, however, is that there is a transition away from more destructive farming practices which promised a lot but actually delivered very little. Agroecology doesn’t require expensive fertilisers that local farmers can’t afford, or an agricultural degree that they can’t use. It’s simple, cheap and the only thing they invest in is the quality of the land. For Lankoande, who has three small children, that’s an investment worth making.