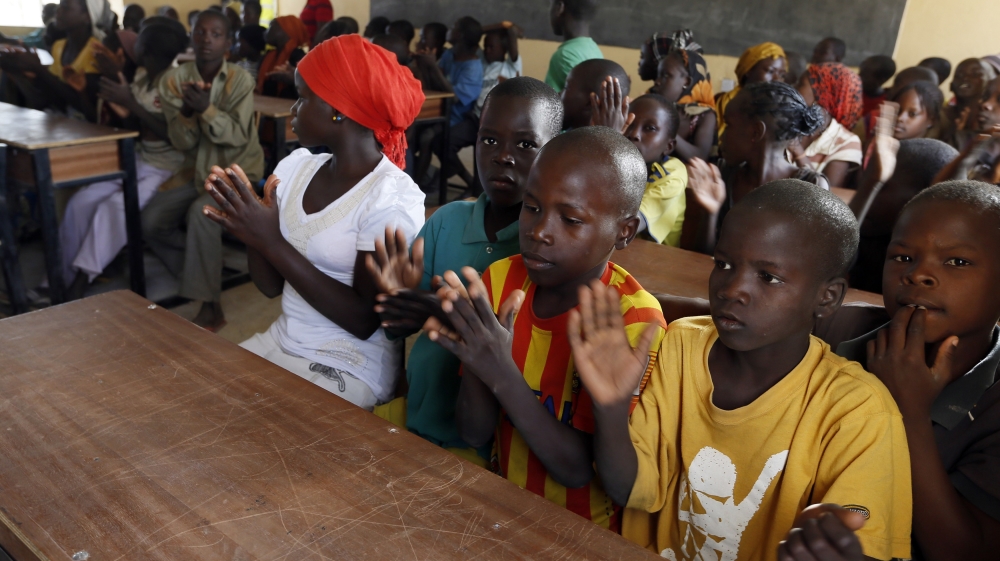 An estimated one million children have been forced out of school as a result of violent attacks by Boko Haram in northeastern Nigeria and its neighbouring countries, a new UNICEF report said on Tuesday.

The ongoing violence has led to the closure of more than 2,000 schools in Nigeria, Chad, Niger and Cameroon, the agency said. Hundreds of others have been attacked, looted or burned by Boko Haram, whose name roughly translates to “Western education is forbidden”.

“The conflict has been a huge blow for education in the region, and violence has kept many children out of the classroom for more than a year, putting them at risk of dropping out of school altogether,” said Manuel Fontaine, UNICEF’s West and Central Africa regional director.

Fontaine said the “staggering” figure of one million children out of school increased the risks of them being “abused, abducted and recruited by armed groups”.

Children have been particularly targeted by Boko Haram and have often been the victims of sexual abuse, forced marriage, abductions and brutal killings. Terrified and traumatised, many families are keeping their children away from classes.

“A lot of parents in the northeast would not send their children to school because they’d be afraid of what would happen,” Hafsat Maina Muhammed, executive director of the Choice for Peace Gender and Development NGO in Damaturu, told Al Jazzera.

“My children were at home for about two years – they didn’t go to school because we were afraid that when they’d go to school there’d be attacks and bombs. There were times that my kids would be missing [school] for two days because there was a bomb somewhere.”

Muhammed, who has worked for years at the grassroots with children – especially those affected by Boko Haram – countering violence through education and peace building, knows first-hand the challenges faced by many children in Nigeria’s northeastern states.

“They are telling me, ‘we want to go to school but we are afraid and there’s nobody to support us’.

“It breaks my heart because I know that these children are intelligent, artistic, strong and healthy. They deserve to have education to be better people in the future. Even at the age of eight, these children know they are not being given the avenue to go and pursue their education and become who they want to become.”

Overall, some 10.5 million children are out of school in Nigeria – Africa’s most populous nation – with 9.5 million from the northern part of the country, according to professor Kyari Mohammed from the Modibbo Adama University of Technology in Yola.

“Nigeria ranks second only to Pakistan in the number of children out of school,” he told Al Jazeera.

“What the Boko Haram insurgency has done, particularly in the three worst-affected northeastern states, is to keep children out of school – and even in [other] areas parents are still scared of sending their children back to school.”

But it’s not just the families who are afraid.

Insecurity and the threat of attacks are also discouraging many teachers from returning to classes. In Nigeria alone, about 600 teachers have been killed since the start of the Boko Haram insurgency in 2009.

“I know many teachers who aren’t teaching because they’re afraid for their lives,” said Muhammed. “They don’t know who to trust in their own community so they won’t teach.”

Some 20,000 people have been killed and about 2.3 million displaced since Boko Haram started its violent campaign in 2009.

More than 800,000 children have been forced to flee their homes because of the conflict, seeking refuge in relatives’ homes, abandoned buildings or host communities with little access to humanitarian support.

Camps for internally displaced people (IDPs) are also strained, forcing many to seek shelter in school buildings and classrooms.

This has only helped to exacerbate the crisis in northeastern Nigeria, a region with an already fragile and poorly performing education system

“Total devastation… Most of the infrastructure has been destroyed,” Paul Gadzama, co-ordinator of the Education Must Continue Initiative, told Al Jazeera.

“Teachers, students and parents are living in despair without any hope of restoration of education. In many places, schools will have to start from the scratch.”

In order to address the crisis, activists said the Nigerian government needs to act urgently on a number of fronts – from defeating Boko Haram militarily and ensuring the safe return of the IDPs to their communities, to providing security and rebuilding infrastructure.

Nigerian President Muhammadu Buhari, who pledged to tackle Boko Haram before taking office in May, has set an end-of-December target to stamp out the group. Yet, the fighters continue attacks in Nigeria and neighbouring countries, and analysts say the deadline is unlikely to be met.

“The greatest impact on education in the region will not be felt until the next generation of children,” said Gadzama. “If nothing is done urgently to stop the destruction on education, the next outbreak of insurgency could well be worse than what has been witnessed.

“Most of the young ones we speak with have one goal in mind as to what they want to become in the future: Soldiers. For what? Vengeance is top most in their minds. Can one blame them?”