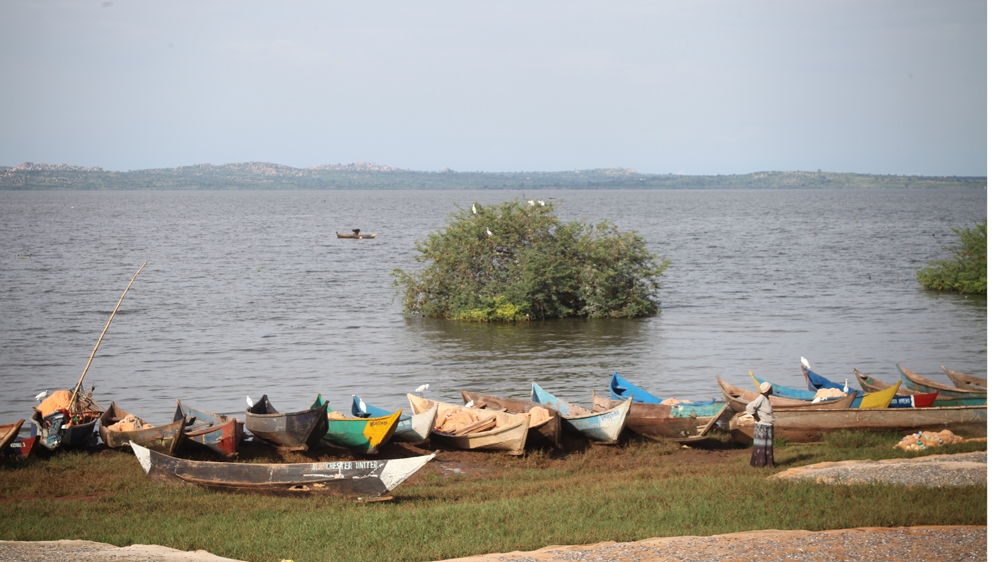 Maluba, Uganda – Gracious Omondi invigilates the classroom. With incessant, searching eyes, he zigzags the only quarter filled, unpainted room, looking out for the wandering gaze of a student. It’s the final week of the third term exams at Victoria View Academy in Maluba, a small fishing village in Uganda.

He has been teaching for more than 10 weeks now in the small classroom near the shores of Lake Victoria. Today, it is time for the students to reap what they’ve sown these past weeks. Wearing a dark green shirt and gripping a thick wooden stick, Omondi patrols the classroom. It’s a maths exam, and he knows all too well that the students seated before him have no affinity for the subject.

In spite of his belligerent demeanor, Omondi is deeply troubled. Here in Maluba, education is facing a steep decline.

“At the start of the term, we had 150 students enrolled in this school. Today, the ones doing the exams are only 30,” he says, shaking his head despairingly. “Where are the other 120?”

In this tiny village, Lake Victoria provides a livelihood for most of the inhabitants. As daylight breaks, buyers flood into Maluba from the surrounding urban areas of this landlocked country to satisfy their demand for fish from the bounty of the lake.

But in spite of their economic leverage, the villagers’ literacy levels have reached an all-time low. Children are increasingly dropping their pens and picking up their fishing nets as they find that financial sustenance is far more important than education.

WATCH: A young girl’s struggle to go to school

Parents who have grown up selling fish from the shores of the lake often show little concern for what goes on inside the classrooms and it is a mind-set that is being passed on to the younger generation. Some parents are even encouraging their children to give up their education and take up fishing.

Like an orchestra, the villagers sing jovially, with women ululating at the sight of their sons returning with fish-filled buckets.

Asman Sizeh used to be a student of Omondi’s – until he dropped out of school. The teacher had high hopes for the 14-year-old, imagining him as an example that could help to draw other young boys back into the classroom.

But Sizeh chose the profession of his father. Being a fisherman seemed to offer more rewards than sitting in a classroom. For, despite his good grades, Sizeh had a different dream – one that led him onto a wooden boat floating atop the calm waters of Lake Victoria.

“My parents grew up fishing, and they all had a good life – [they’re] happy. Why should I go to school?” asks Sizeh as he untangles and then spreads his old grey fishing net. For him, sitting behind a wooden desk in a stonewalled building is a waste of time.

“Fishing gives me a lot of money. If I chose to stay at home or go to school, I wouldn’t get such an income,” he says.

Once the best in his class, Omondi describes him as a “brilliant brain” – but it is one the school has lost.

Sizeh heads towards his boat and settles in, making sure he’s got everything he needs before joining his fellow fishermen out on the lake. Slowly, he paddles out of sight.

Five hours pass before the boy rows back to shore and jumps out of the boat with his earnings for the day.

His younger brother rushes over to help unload the fish into a basket and then dashes towards the grounds of the makeshift marketplace. Sizeh is well-known in the bustling market, where fishermen and vendors gather to haggle for the best prices. Village women rush over to him and the other fishermen to buy the fish that they will later resell to the buyers from the towns and cities.

On a good day, Sizeh earns $10, but it can be closer to $2 on slower days. It is a full-time job for the teenager.

“Nothing can bring me down – not even the train of house flies following me whenever I carry fish to the market,” he smiles. “Not even the bad fish smell.”

His parents fully supported his decision to work as a fisherman and to leave his education behind. He is the second of their four children. His older brother also left school to fish, and his two younger siblings, who accompany him to the lake every day, seem to be on the same path.

And the majority of school-aged children in the village seem to feel the same way as Sizeh. Few see much point in going to school and, in some instances, parents even encourage them to stay home so they can help with chores.

The United Nations’ Millennium Development Goals, which outline targets in identifying and solving problems of poverty, disease, hunger, equality, and education, among other issues, reported a significant surge in the number of primary education enrolments in developing regions. It reached 91 percent in 2015, up from 83 percent in 2000, when the targets were initially set.

While that offers a ray of hope for teachers like Omondi, in 2015, 57 million children of primary school age were identified as being out of school. More than half of these children were in sub-Saharan Africa.

In April, elders in Maluba convened to discuss the high rates of children dropping out of school. The pro-education parents decided on a plan to discourage school drop-outs by making it punishable for any parent to allow their children to abandon their studies.

But, according to 65-year-old retired fisherman Patrick Odinga, this was all just talk. He originally led these education advocacy meetings, which included local police, as well as the Beach Management Unit, which manages the lake, its shores and fisheries. But Odinga’s mission to force children into classrooms created hostility between those seeking to endorse education and those who felt that the authorities had no business in their personal affairs.

“It is difficult trying to tell parents of the importance of gaining knowledge. It has caused more harm than good for me,” says Odinga, who has since given up his advocacy.

“Education is important for our people. It is not good for them to stay at home. They should be in classrooms studying,” adds Odinga, who attributes parents pulling their children from school to poor awareness of the benefits of education and a lack of government initiative in advocating for it.

‘I can’t afford to see my children follow this path’

But not all parents are against education or Odinga’s efforts. A few believe it’s their children’s only way out of a future of poverty. Dobista Wagwena is one such parent and one of the few fisherwomen in the village.

“Education is important. I missed the chance to be in a classroom. I can’t afford to see my children follow this path,” says Wagwena, who insists she’d rather be lonely on the lake than take her children out of school for economic gain.

Back in his classroom, Omondi is hanging on by a thread. After months of not getting any salary, as teachers are paid based on student enrolment, he has started to join Sizeh and the other fishermen out on the lake. He started fishing as a part-time hustle, but he’s now considering taking it up full-time.

“I have not been paid for the last three months, since children have been dropping out of school,” he says.

“The number of school dropouts is growing as the clock ticks. Soon, there will be no one to teach,” Omondi notes, despairingly. He knows that each day could be his last at Victoria View Academy.

The post Boats over books for many of Uganda’s children appeared first on African Media Agency.