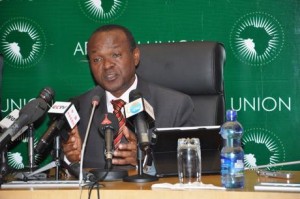 Mr Erastus Mwencha: Deputy Chairperson of the African Union Commission[/caption] The new Government Complex Conference Centre of Lusaka, Zambia was full to capacity, with high profile representatives from different worldwide organisation as well as continental organisations dealing with various forms of child abuse including early marriages and related issues. The delegates converged in Lusaka on 26 and 27 November 2015, to discuss ways to eradicate the scourge of child marriage in Africa, within the framework of the First African Girls’ Summit, organized by the African Union Commission (AUC) in collaboration with the Government of the Republic of Zambia. The AUC Chairperson, Dr Nkosazana Dlamini Zuma, addressed the Summit participants in a recorded video message saying, “We must end child marriage and educate the girl child so that they can attain their full potentials….Girls who end up as brides at a tender age are coerced into having children while they are children themselves.” She stressed that cultural norms that undervalue girls and women are largely to blame. “Child marriage generates norms that have become increasingly difficult to exterminate – norms that undermine the value of our women.” The AUC Chairperson further stressed that child marriage is a critical problem that interrupts the education of girls and undermines their chance to develop and that child marriages take away girls chance to develop and get empowered. “Children’s rights should be respected. The future of our children must be protected because they are our assets for our development.” Dr. Dlamini Zuma underscored. Dr. Mustapha Sidiki Kaloko, Commissioner for Social Affairs at the African Union represented the AUC Chair at this important Summit on ending child marriage in Africa.  He reiterated the importance of the AU Campaign on ending child marriage in accordance with the African Charter on the Rights and Welfare of the Child. According to Commissioner Kaloko, the AUCampaign to End Child Marriage is aimed at raising awareness and accelerating change across the African continent. He noted that the adoption of the AU Common Position on this issue at the AU Summit last June, demonstrated commitment at the highest level in the continent. “Country-level launches of the AU Campaign are also helping to mobilise stakeholders, governments, civil society, traditional and religious leaders, men and boys, to contribute to national level action. Looking forward, we must focus on supporting countries to develop national-level strategies and policies to end child marriage that are realistic, well-resourced and effectively implemented,” underlined the Commissioner. Speaking while officially opening the First AU African Girl Summit on 26 November 2015 in Lusaka, H.E Edgar Changwa Lungu, President of the Republic of Zambia reiterated that child marriages must come to an end. The Head of State said child marriages pose a greater challenge in Zambia just like other African Union member states. He urged AU Member countries to fight this scourge so as to create an ideal and safe environment for all children in the continent. The President stated that his government is working tirelessly to ensuring that child marriage is completely eradicated. “So far, the prevalence has reduced from 42 percent to 32 percent; let us join hands together and end the scourge,” he stressed.  President Lungu expressed appreciation to the African Union for choosing Zambia as the first country to host African Girls’ Summit on ending child marriage in Africa. The Zambian Minister of Gender, H.E. Prof. Nkandu Luo said there is need for everyone’s participation and commitment to curb child marriages. “Zambia is not spared, it is among other countries that are struggling with issues of child marriages”, the Minister noted. “The Government of Canada is committed to ending child, early and forced marriage because the impacts of this practice are so profound and so far-reaching. We all know the facts -15 million girls are married every year before they turn 18. That’s 15 million childhoods interrupted. 15 million futures forever changed. Child marriage is a violation of girls’ rights. It disrupts their access to education, jeopardizes their health and makes them vulnerable to violence. It also keeps girls from reaching their full potential and from fully contributing to the social and economic growth of their families, communities and countries. “Said the representative of the Canadian Government, Hon. Joyce Murray, Member of Parliament in her opening remarks.  (See complete statement of Hon. Murray on the AU Website: au.int ) The Summit brought together religious and traditional leaders, the youths, African First Ladies amongst other dignitaries. The event featured several short videos, parallel sessions and panel discussions on child marriage. The first panel discussion was animated by Dr. Olawale Maiyegun, AU Director for Social Affairs, Mrs. Nyaradzayi Gumbonzvanda, African Union Goodwill Ambassador on ending Child Marriage, Ms. Omotola Jalade Ekeinde, Famous Nollywood actress, Dr. Tererai Trent, Child marriage survivor and activist, Mrs. Letty Chiwara, UN Women Representative to Ethiopia, the African Union and UNECA, and the representative of “Girls not Brides”. The issues discussed during the parallel sessions included: Changing the attitude on tradition and culture towards harmful traditional practices and the role of the media in the promotion of positive support for preventing child marriage and teen pregnancies, among others. The outcome document of the Summit stressed among others, on the critical need to recognize that everyone has a role to play in ending child marriage – from international organizations to continental, regional  and national organizations through concerted actions and strategies that holistically address the issue, to communities themselves, including religious and traditional leaders, parents, men and boys, and girls themselves. The Summit resolved that a multi-sectoral approach is needed to end child marriage. This interventions at multiple levels simultaneously such as mobilizing families and communities in order to change attitudes and reduce the acceptance of the practice; ensuring that girls have access to quality education and health services, including reproductive health services, as well and economic development opportunities; empowering girls to be able to say no to marriage; and establishing and implementing laws and policies that protect girls and help prevent child marriage. *AU/APO]]>