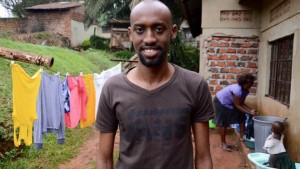 Like much of Africa, Uganda has a vibrant technology and start-up scene. Some of the technology being developed is geared towards e-commerce and creating jobs, but others are using their computer-programming skills to create tools to solve Uganda’s development challenges.

It’s a familiar problem for young people around the world – it’s Saturday, you’ve got a hangover, and there’s a big pile of washing waiting to be done for the week ahead. But on a cool Saturday morning in one of the Ugandan capital’s many hilly suburbs, Gloria is unfazed by her pile of dirty clothes. “It’s amazing, even with a hangover, I don’t have to worry about it,” Gloria says, looking over her shoulder to the beckoning comfort of her living room. Outside, single mother Naiga is at work bending over a pile of clothes she’s washing in three big bowls of soapy water. Like many others in Kampala, Naiga hand-washes other people’s laundry to pay her rent and take care of her nine-month-old baby. It’s an old-fashioned job, but Gloria and Naiga have been brought together by cutting-edge technology. Yoza, a locally developed android app, helps users find laundry services. Yoza means “to wash” in Uganda’s major language, Luganda. “Ten years ago, it was rocket science,” says Nicholas Kamanzi, one of Yoza’s co-founders.   “But now if someone can just pick up their phone and get these services on demand, that’s a big thing.” Yoza is like Uganda’s version of Uber for dirty laundry – using technology like location detection and social ratings to match service providers with clients. But it takes local knowledge to implement this kind of idea in Uganda. While there are enough middle-class Ugandans in places like Kampala with smartphones who can access the app, few of the laundry women have them. [caption id="attachment_23144" align="alignright" width="292"] 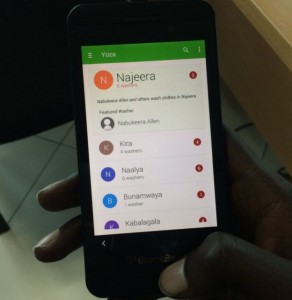 The app helps locate people who you can pay to wash your clothes[/caption] So Yoza calls them up on their regular phones to sign them up, and book them for jobs. Naiga is one of nearly 140 women now signed up to do laundry, and Mr Kamanzi says some of them have doubled their income. “The value is very clear” for the laundry women, says Mr Kamanzi. “We’re giving you more clients in your area, so that you can make more money and maybe look after your family and pay school fees.” Yoza is typical of Ugandan start-ups – using innovative means to tackle a local problem, in its early stages, and with a tiny customer base by international standards. But despite this, Mr Kamanzi says Yoza, which launched in August, is commercially viable.

Another innovative app is Pig+, an android app developed by Lacel Technologies. It helps pig farmers to track their expenses, advises on what to feed the pigs, and helps diagnose health problems. At a farm outside Kampala, farmer Kelly Kasoze is a big fan of the app – and the fact that it’s local. “It’s amazing that it’s Ugandan, I thought it was done by the British or Americans,” he says. “It tells me that in Uganda we have talent. “Uganda is very innovative, I hope that we may be moving faster than America.” Pig+ only has around 200 users, so America’s tech giants might not be losing sleep yet. I ask Marvin Bosura from Lacel Technologies whether coding apps is a way to get rich, like in the Silicon Valley dream. “I’d say it’s not,” he says, laughing. “Our incentive is problem-solving. Knowing that my four years at university has helped 1,000 people, that’s worth more than money.” That sense of wanting to help address Uganda’s development challenges is common amongst the country’s start-ups.

Afrigal Tech is a group of young women in their 20s, developing a product called Mdex. It is a low-cost, portable hardware and software tool for diagnosing sickle cell anaemia, a serious hereditary blood disorder. “If we put these in Uganda’s 3,000 health centres, very many people would be reached, and if everyone got to know their sickle cell status, in the long run it would be easy to get a sickle cell-free generation,” says Africagal Tech’s Bonita Beatrice Nanziri. The Afrigal Tech team are advocates for getting more Ugandan women involved in the tech arena. They laugh about what their experiences was like when they began. ”We’d go to hackathons and be the only girls,” says Ms Nanziri. [caption id="attachment_23145" align="alignleft" width="300"] 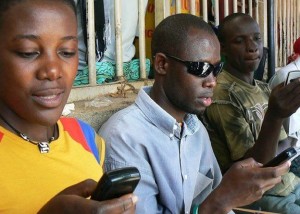 If the laundry women don’t have access to a smartphone, they can be called instead via Yoza[/caption] “The boys would give you a look like you were lost and you’d hear them say: ‘When you put a girl on your team, she won’t do anything’. “But when I got on board, they found I could do something, they were laughing at themselves.” The Afrigal team hasn’t let these attitudes hold them back. ”If you choose tech, you have to be more outgoing and aggressive,” says Ms Nanziri. If they can crack the finance and technical problems, they reckon they might have a product on the market by the end of 2016. Developing Mdex has taken hours of personal sacrifice, late nights up writing code and paying for the prototypes themselves.

Self-funding is typical for Uganda’s tech entrepreneurs. The external support available is often in the form of prizes in innovation competitions supported by international tech firms. Barbara Birungi is co-founder of Hive Co-lab, a tech hub located in a Kampala street which is home to a number of start-ups and technology companies. The stretch may well be considered Uganda’s Silicon Valley. “To be honest, unemployment is the biggest factor,” she says when asked what draws people to the start-up world. “We showed people you could do stuff for yourself and make an impact on lives in your village. “People are now realising they don’t have to wait for a job and create jobs.”   It is estimated that more than 40,000 young people graduate every year from Uganda’s universities. With only about 8,000 jobs available, many graduates remain unemployed. There is a compelling argument for the importance of tech hubs and business incubators to nurture young people with viable ideas in a country where at least 60% of people under age 30 are jobless. And as Joanita Nalubega from AfriGal Tech explains, trying to get help from the government can be frustrating. ”There’s too much red tape. “Even if they are willing, there’s always another person who’s supposed to sign off, lots of signatures.” There are other challenges too, such as infrastructure. Fix My Community is an innovative platform, modelled on Fix My Street in the UK, that allows residents to use SMS text messages to report local problems to the authorities. But when we visit one of their pilot sites outside Kampala, the local government office tells us their internet has been down for weeks, so we can’t see the system in action.

So should the government be doing more – reducing bureaucracy for instance or investing in new technology? [caption id="attachment_23146" align="alignright" width="300"] 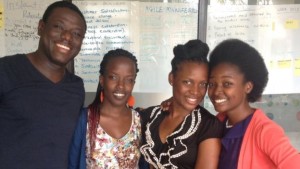 Akwasi Sarpong met the team of software developers making a sickle cell anaemia detector[/caption] David Turahi, a director at the Ministry of Information and Communications Technology, is a keen promoter of the country’s tech scene. But he says there’s a limit to what the government can do. ”We have so many challenges – HIV, Ebola, epidemics. “If we give incentives, then where do we get taxes from?” Despite conceding bureaucracy is a problem, he insists it is an inevitable government disease in every country. The solution in his view is more involvement from the private sector. “Traditionally, government is not a businessman,” he says. The hurdles may be many, but these young Ugandans are inspired and relentlessly invest energy and effort working on solving problems that matter. They all want to see their ideas and applications improve lives in their lifetime. It’s still very early days for Uganda’s tech scene and the challenges they face are huge. But even if this generation of start-ups are not the ones who go on to bigger success, they are laying the groundwork for the future. *BBC]]>