Algeria a ‘symbolic target’ for ISIL 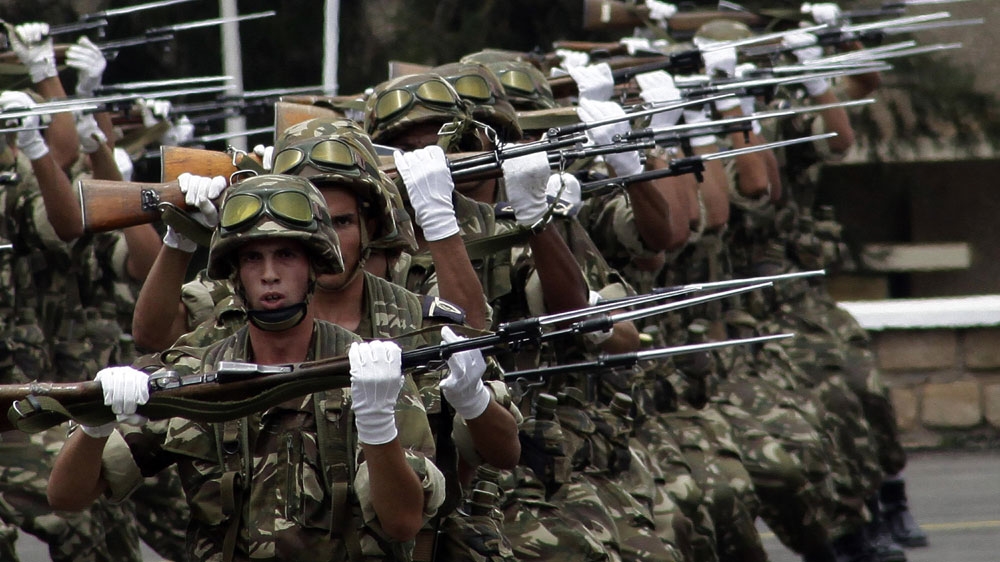 Algiers – Dozens of top African police officials met in Algiers this month to ratify legal documents related to the creation of Afripol, the pan-African law enforcement agency expected to begin operations next year.

Algeria has played a leading role in the establishment of Afripol, which provides a mechanism for cooperation and coordination among African police services. The agency’s headquarters will be based in the Algiers neighbourhood of Ben Aknoun.

According to Algeria’s national security chief, Major-General Abdelghani Hamel, this marks the start of a new phase in the country’s battle against “terrorism”.

“Afripol can provide an added value to the regional and international police cooperation, and bring a police response to the global threats in a changing environment,” Hamel said in a statement.

The increased push for security cooperation among African states comes as Algeria continues to be sealed off from its neighbours. Most of Algeria’s 6,000km of borders are closed and under military control, with the exception of its border with Tunisia.

“The army has been relatively successful in stopping the flow of both fighters and arms trafficking, whereas neighbouring countries – such as Mali, Libya and Tunisia – have been increasingly infiltrated by Islamist fighters,” a retired military officer told Al Jazeera on condition of anonymity.

The oil-producing country has also managed to keep relatively low the number of Algerians joining up with the Islamic State of Iraq and the Levant (ISIL) group. Fewer than 200 Algerians have joined ISIL in Syria and Iraq, compared with 1,500 Moroccans and up to 3,000 Tunisians, according to the International Centre for the Study of Radicalisation and Political Violence.

“The jihadi ideology is significantly less appealing to the Algerian people, especially the young population … given Algeria’s lingering conflict between the government and the Islamist rebels, in what became known as the Black Decade,” Akram Kharief, an Algerian journalist who specialises in defence and security issues, told Al Jazeera, referring to the country’s civil war in the 1990s.

Geoff Porter, head of North Africa Risk Consulting, concurred, noting: “Algerians have had more exposure to jihadi ideology and its failures and, as a result, have not been lured to fight with [ISIL].”

However, Romain Caillet, an expert on armed groups who consults with various international organisations, said there was no way to say with certainty that this type of ideology was on the decline in Algeria, noting Algeria has also exported “terrorism” to other parts of Africa.

“Al-Qaeda in the Islamic Maghreb was substantially founded by ex-fighters of the Algerian Salafist Group for Preaching and Combat, which succeeded the Islamic Armed Group,” Caillet told Al Jazeera. “Despite considerable investments in counterterrorism over the past 25 years, Algeria has not yet eradicated Islamic terror.”

Still, data shows that attacks by armed groups within Algeria have decreased over the past two decades. A total of seven deaths related to “terrorism” were recorded in 2014, a 92 percent decline over the previous year and the lowest level since 1993, according to the Institute for Economics and Peace’s 2015 Global Terrorism Index.

After the deaths of 25 Islamist fighters in an army sweep in Bouira province, east of Algiers, last May, Ramtane Lamamra, the foreign minister, said: “Only remnants of terrorism are left in Algeria.”

According to Kharief, around 1,000 hardened Islamist fighters remain engaged in a “guerrilla” war against the Algerian regime – which they do not see as legitimate – but they have had a difficult time recruiting new members. “The Islamist rebels also face logistical problems, as they continually have to move to new hideouts,” he said.

Algerian authorities, who say they have contained the fighters to three zones – including the northeastern mountainous region of Kabylie and areas bordering Libya and Mali – have been aggressively pursuing them, raking Kabylie for the former leader of the Salafist Group for Preaching and Combat.

Authorities have also made a push this month to target Jund al-Khilafah (Soldiers of the Caliphate), an al-Qaeda breakaway group that pledged allegiance to ISIL, killing several members and destroying dozens of hideouts, according to the defence ministry. Jund al-Khilafah today has fewer than 30 fighters in Algeria, security sources told Al Jazeera.

“There are at least two components to effective counterterrorism,” Porter said. “One is policing, and the other is intelligence. Algeria does a very good job at both. The perimeters that security services have established around Algiers have been very effective in recent years.”

READ MORE: How serious is the ISIL threat for Algeria?

Regardless, security forces in Algeria will remain on continuous alert in the days and months ahead, as the threat of attacks remains high throughout the volatile region.

In July, al-Qaeda’s North African branch claimed one of the deadliest attacks in years, an ambush of a military convoy in Ain Defla that killed 11 soldiers on Eid al-Fitr, the holiday marking the end of Ramadan. The attack came after ISIL released a video titled “A message to the Algerian people”, in which three bearded fighters warned that Algeria would “pay a heavy price” for combating extremism in the Maghreb.

The recent Paris attacks have also prompted concern in the country, with an increased security presence in Algiers.

“According to France’s intelligence, a terrorist attack was likely to be carried out in Algiers following the Paris massacre,” Kharief said. “The Algerian government has responded to a request made by the French authorities to enhance both security and surveillance in the French offices, including France’s embassy… [and] the security system has been reinforced everywhere in the capital.”

Citing the random nature of such attacks, Kharief noted that no security measures can be entirely relied upon to keep the country safe.

“From ISIL’s perspective, Algeria has become the Western countries’ closest ally in Africa,” he said. “It has also emerged as a world leader in the struggle against terrorism. That makes Algiers a symbolic target.”