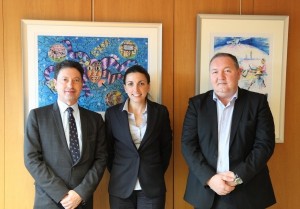 The partners :From left to right : Michel AZIBERT – Eutelsat, Nathalie MARTIN – Wikimedia Foundation, Philippe TINTIGNAC – Afrique Telecom[/caption] Afrique Telecom  is progressively deploying Internet solutions over Sub-Saharan Africa in combination with Eutelsat’s satellite capacity. Its “TamTam” service extends access to the Internet in rural areas using Wi-Fi hotspots for collective access. In a new step announced today, “TamTam” will be used to offer free access to French-language Wikipedia content for many thousands of users. This initiative, starting in French-speaking Africa, supports Wikimédia France’s strategy to promote free access to educational content, in particular through Wikipedia. In order to offer free, unlimited access, Afrique Telecom has developed a server located at “TamTam” hotspots that will locally host French-language Wikipedia content. The content will be updated regularly via a satellite link provided by Eutelsat. A major pilot project Afrique Telecom’s ambition is to roll-out “TamTam” to between 4000 and 8000 hotspots in the next two years. Eutelsat has agreed to finance servers hosted by the first 1,000 hotspots as a springboard that will also measure the impact of the service. The Wikimedia movement has made a priority of improving accessibility and content creation on Wikipedia for so-called “Southern” countries. There is still a large gap between Northern and Southern countries in terms of the number of readers and contributors to Wikimedia platforms as well as content on Southern countries. French-speaking Africa is a priority action area for the Wikimédia France Foundation, as a complement to its Afripédia project. Wikimédia France, an association for free knowledge-sharing, was founded in 2004 to promote and support all projects hosted by the Wikimedia Foundation in France. Wikimédia France does not produce or host any Wikimedia Foundation projects, but strives to enrich them and raise their profile through its members’ support of its actions. Founded in 2005, Afrique Telecom (NYSE Euronext Paris: MLAFT, ISIN code: FR0011233659)  is an innovative telecommunications service operator offering economic models of satellite-based connectivity solutions that are unique on the market. The expertise of Afrique Telecom’s development teams is acknowledged in Africa for their work to reduce the digital divide on the continent. With more than 4000 stations in operation, Afrique Telecom is one of the leading players in satellite-based connectivity in Sub-Saharan Africa. Established in 1977, Eutelsat Communications (Euronext Paris: ETL, ISIN code: FR0010221234) is one of the world’s leading and most experienced operators of communications satellites. The company provides capacity on 38 satellites to clients that include broadcasters and broadcasting associations, pay-TV operators, video, data and Internet service providers, enterprises and government agencies. Eutelsat’s satellites provide ubiquitous coverage of Europe, the Middle East, Africa, Asia-Pacific and the Americas, enabling video, data, broadband and government communications to be established irrespective of a user’s location. Headquartered in Paris, with offices and teleports around the globe, Eutelsat represents a workforce of 1,000 men and women from 37 countries who are experts in their fields and work with clients to deliver the highest quality of service. *APO]]>