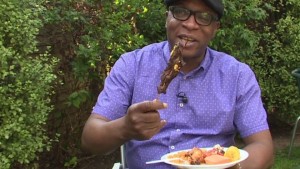 African food is widely available in London and Paris with their large African populations and historic ties to the continent. Peter Okwoche, a self-confessed gourmet and BBC presenter from Nigeria, has been finding out if it has a wider appeal.

Living in London, it is not too hard to sate my hunger for a taste of home as markets selling African food dot the city. There are also a lot of Nigerian restaurants, but they are mainly filled with Nigerians – other Africans may also be tucking in, but hardly any Europeans. London is a bustling cosmopolitan city where, according to Mayor Boris Johnson, more than 300 languages are spoken – that is at least 300 different cultures. But while cuisines from countries like China, India and Thailand have become very popular, the same cannot be said about African food. So why hasn’t African gastronomy caught on? Perhaps in these days of healthy eating – a particular obsession of the European press – African food is seen as containing too much oil or carbohydrates or not enough protein. But London-based Ghanaian cook Fafa Gilbert, who teaches people how to make Africa food with a European twist on her YouTube channel, could not disagree more.
An avid experimenter, she believes there are lots of healthy African food dishes that have a wide appeal. The whole ground floor of her home has been turned into a massive, elegant and modern kitchen. In one corner there is a computer where she writes down all the recipes that she comes up with. “This is where I feel truly feel free,” she says. [caption id="attachment_23130" align="alignright" width="300"] 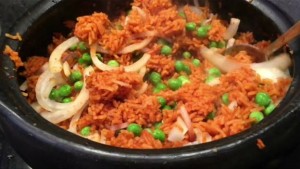 West Africans can get touchy about changing the recipe of jollof rice[/caption] When we visit, she is making a dish called “yam croquette”, which sounds more French than Ghanaian. The main ingredients of a croquette – a fried bread-crumbed roll served as delicacy or a fast food – are usually mashed potatoes and/or ground meat. Ms Gilbert replaces the potatoes with yams – and serves it with a light stew made with tomatoes and traditional Ghanaian seasoning. It is brilliant and my cameraman, who is English and has never tried any African food before, was immediately hooked.

For Nky Iweka, a computer scientist by training and long-time Londoner and foodie, it is important to actually see people savouring her creations. She trained as a computer scientist, but quit her job to pursue her dream: Introducing Nigerian cuisine to the rest of the world. Her plan is to open a Nigerian restaurant that will appeal to people of other cultures as well. [caption id="attachment_23131" align="alignleft" width="300"] 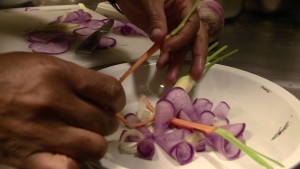 For French-Ivorian gourmet chef Loic Dable food is art[/caption] Calling herself “the executive Mama Put” – after the colloquial name for food stall vendors in Nigeria – she now organises cookouts, inviting people of different nationalities to come and have a taste of her take on Nigerian food. And in all fairness, African food is beginning to get a reputation; Ms Iweka sees it is as “the final frontier of cuisine”. So much so that when British celebrity chef Jamie Oliver came up with his own take on jollof rice, a traditional West African dish akin to a paella or risotto, he caused uproar in the West African online community for substituting some traditional ingredients with those easier to find in Europe. But there are those who argued that a famous cook acknowledging an African dish means the continent’s cuisine is making inroads into Europe.

Loic Dable, a French cook with roots in Ivory Coast, could be a case in point. He has just opened a gourmet restaurant right in the middle of Paris’s upmarket 16th arrondissement – a stone’s throw from the Eiffel Tower and Arc de Triomphe. It is the first of its kind in a city notorious for its demanding and unforgiving eaters. Mr Dable, who cut his teeth at Paris’s luxurious Georges V hotel, describes his food as an art and says the location was chosen because it complements his African food. His food did resemble an artwork more than your usual African dish. The scallops and baby carrots I had might seem more European than African, but the dish was garnished with a sweet baobab tree condiment. And this being haute cuisine, plates were not piled high at Cafe Dapper Loic Dable – a definite contrast with more traditional African restaurants.

‘Number one within 11 months’

But the real breakthrough for African cuisine seems to have come from the Horn of Africa. Within a year of opening, the small Eritrean Blue Nile cafe was ranked the top restaurant in London in November 2014 by review site TripAdvisor. “I use to have it as a sandwich bar and it was not doing very well. So we decided to change it to an Eritrean one,” says Shewa Hagos, who runs the restaurant with her three sons. [caption id="attachment_23132" align="alignright" width="300"] 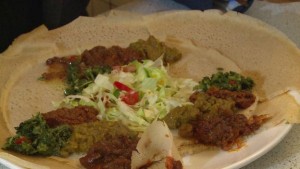 Injera is made from teff, considered the new “super grain” as it is high in protein and calcium[/caption] Its speciality now – like other Ethiopian and Eritrean eateries – is injera, a fried sourdough flatbread. Made from teff, a cereal which is very low in gluten, it is served with stews and curries and is usually eaten by hand. “I couldn’t believe we were number one within 11 months… it was a very nice feeling,” says Ms Shewa.
Other popular foreign cuisines have evolved to cater for European palates – take tikka masala curry, which was invented in the UK. More European-based African cooks now seem to be trying to please a more diverse crowd. The Blue Nile website emphasises the gluten-free aspect of its menu and its “wide range of vegetarian dishes”. “Last week, we had some costumers from Iceland and also from Sweden and different nationalities and it’s nice,” says Ms Shewa. *BBC]]>