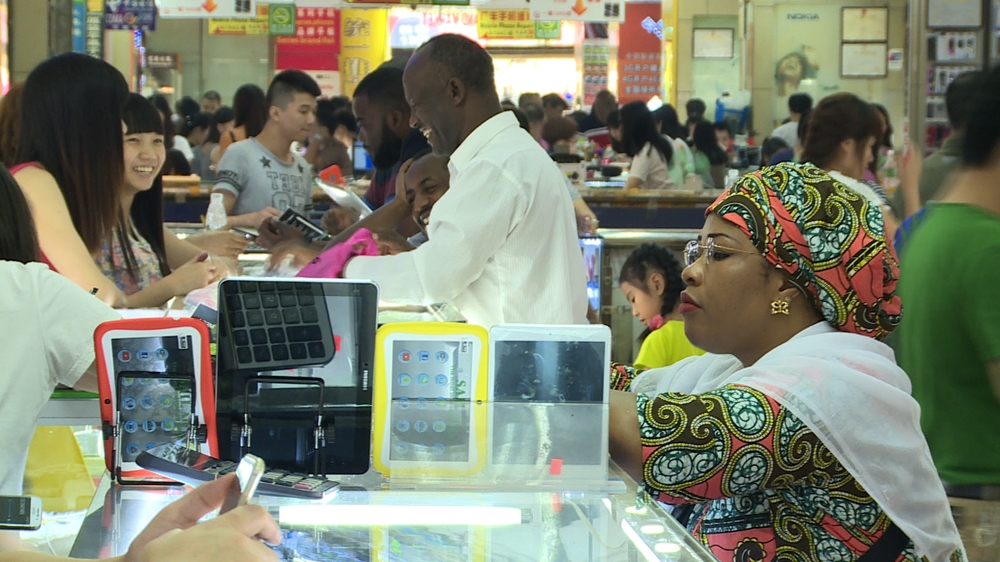 Many African entrepreneurs today consider China as the new land of opportunities.

One of them is Annie Ngimbi from the Democratic Republic of Congo (DRC). With demand for Chinese products growing, Ngimbi is on a shopping spree in China’s third largest city, Guangzhou.

She has three weeks to fill a container with a list of products to sell back home in the DRC. She buys everything from clothes, furniture and electronics to food items such as onions and garlic.

A dynamic woman, Ngimbi is no pushover when it comes to business. Working with an established network of African and Chinese middlemen and traders, she haggles with some of the toughest businessmen in the world.

Through her journey, we see how African and Chinese traders grapple with geographic and cultural hurdles to make a profit.

The idea for this film initially arose in September 2007. China and the DRC had just signed an unprecedented multi-billion dollar deal, under which the mineral-rich African country was to provide China with $14bn worth of copper and cobalt, in return for 3,500km of roads and railways as well as more than 30 hospitals and other infrastructure projects.

Unlike most loans extended by Western countries and approved by the IMF and the World Bank, there were no good governance or institution-reinforcement conditions attached to the contract.

At the time, I was working as a DRC-based journalist in Kinshasa, living near the Chinese embassy.

As the contract was drafted and signed, the queue in front of the Chinese embassy grew by the day, with young Congolese receiving student visas and middle-aged women obtaining business visas in their hundreds.

Most African airlines also started to operate flights to Guangzhou – the first Chinese town to open to free trade (in 1978) since the establishment of the People’s Republic.

Beggars in Kinshasa’s streets started saying “ni hao” – hello in Chinese – to all non-black people they would meet, a clear sign that the pulse of the town was beating to a Chinese rhythm.

The People’s Republic of China has fostered increasingly strong ties with African countries since 1971, when it got its seat as a permanent member of the UN Security Council, thanks to the vote of African nations.

In recent years, however, whether it be in the DRC and the contract mentioned above, or in many other African countries, the ties have reached an entirely higher lever.

To many Africans, China has replaced their former Western colonial powers – with their increasingly difficult loan conditions and visa requisites – as a major business partner.

But does China represent a model that is sustainable for Africa?

I decided to join some Congolese traders as they went on their shopping spree in Guangzhou and watched them develop economic relationships with the Chinese and discuss “the Chinese model.”

I was stunned to see how easily they found their bearings in China, with some of them learning the language in just a few months.

I have focused mostly on female traders because they have always been a major agent of social change in Africa.

Nicknamed Mama Benz after Mercedes Benz, the ultimate symbol of success in the 1970s, female traders were fostering economic growth long before many African countries plunged into political repression, economic crises and war during the 1980s and 1990s.

And nowadays, thanks to their China-based business partnerships, the African female traders are opening up a new trading route that is slowly changing the face of the continent.