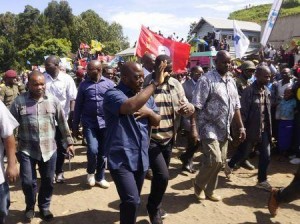 KINSHASA (Reuters) – More than 27 high-profile Congolese figures, including Moise Katumbi, considered a main opposition candidate in next year’s presidential polls, have formed a coalition aimed at preventing a bid from Joseph Kabila for a third term, their statement said.

“We have decided to combine our forces, our human and material resources, our strategies and our actions, to create a citizen coalition named ‘Citizen Front 2016’,” the statement reads.

Kabila, who is constitutionally barred from seeking a third term in office, has not commented publicly on his political ambitions despite critics’ accusations that he is attempting to cling to power.

The announcement comes as the vast central African country’s parliament contemplates giving more protection from prosecution to former rulers, viewed as a way of encouraging Kabila to step down in November next year.

Africa’s biggest copper producer has not had a single peaceful handover of power since independence from former colonial master Belgium in 1960.