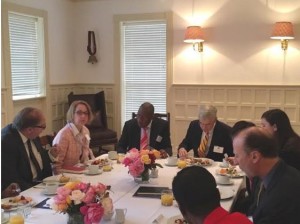 Ex-President Goodluck Jonathan being received by the Presidential Precint Board, US[/caption] Former President Goodluck Jonathan, who arrived the United States of America, yesterday, as a guest of the Presidential Precinct, Challotsville Virginia, has assured the international community that African leaders are displaying more commitment to democracy and good governance, as a means of engendering sustainable development and improving the lives of the people. Jonathan who arrived the institute accompanied by a delegation from the Nigerian Embassy in Washington, also advocated the readiness of Nigeria and Africa for the sustenance of democratic principles, peace and people-oriented governance. He was received by Francois Baird, Chairman of the Presidential Precinct Board. The Presidential Precinct, a foremost global institution designed to empower the next generation of leaders, is currently hosting Jonathan for his role in Nigeria’s smooth democratic transition, especially with the seamless handover of power from the ruling party to the opposition. At the Presidential Precinct breakfast, President Jonathan was received by former Governor Jerry Baliles of Virginia and Francois Baird Chairman of the Presidential Precinct Board. His hosts described him as a ‘Hero of Democracy’ in Africa, a nation builder and sustainer of true democratic principles and good governance. While in the United States, Jonathan is billed to be hosted by other strategic US pro-democracy institutions where he would be sharing his experience on peaceful and transparent elections as well as the future of Africa’s democracy. The Presidential Precinct is a consortium uniting six American landmark institutions – four of America’s most important historic sites and two of the country’s most outstanding public universities. These include the College of William and Mary (America’s second oldest university), the University of Virginia, William Short’s Morven, and the homes of three Founding Fathers;President Thomas Jefferson’s Monticello, President James Madison’s Montpelier and President James Monroe’s Ash-Lawn Highland. Jonathan has hit the international circuit lately, with last’s week’s appointment by Commonwealth to lead negotiations for the resolution of the political stalemate in Zanzibar, coming as his latest high profile assignment. It followed his leadership of the Commonwealth Observer Group (COG) to last month’s Tanzania general election which came as an affirmation of the former President’s towering status as the moral face of democracy and transparent polling in Africa *vanguard]]>