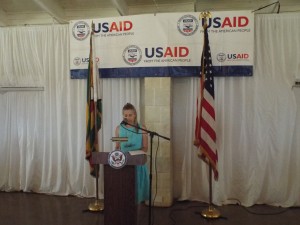 Ms Stephanie Funk, USAID Mission Director in Zimbabwe launches new
agricultural support programmes to alleviate poverty in Zimbabwe.
Photo credit:Wallace Mawire[/caption] The United States government through USAID, its humanitarian intervention support organisation has launched three joint agricultural support programmes to the tune of $21,5 million over the next five years aiming to address food and nutrition security and promoting poverty reduction in Zimbabwe. According to Ms Stephanie Funk, USAID Mission Director in Zimbabwe,the three new programmes are the feed the future livestockdevelopment, the feed the future crop development and the community water, sanitation and hygiene programmes.Funk said that although the USAID’s Zimbabwe Agricultural Income and Employment Development Programme (Zim-AIED) is ending, the US government is not ending its support to the people of Zimbabwe. “Infact, we are launching two new agricultural development programmes, one focused on crops and the other focused on livestock,” Funk said. She also said that the feed the future Zimbabwe livestock development programme will be implemented by Fintrac, the feed the future Zimbabwe crop development programme will be implemented by Lead Trust and the community water, sanitation and hygiene programme will be implemented by the Development Assistance People to People (DAPP) organisation. “Together $21,5 million will be committed over the next five years on the activities that will provide assistance to more than 70 000 rural households reaching more than 350 000 people in good agricultural practices,linkages to markets,training in farming as a business,access to credit,nutrition,hygiene,water and sanitation.We have ambitious goals that include reducing the level of poverty, increasing food and nutrition security and increasing access to clean water and improved sanitation,” Funk said. She also added that in spite of the challenges Zimbabwe is facing,USAID has already achieved significant successes with previousprogrammes where average income per beneficiary farmer increased almost three fold as a result of the organisation’s assistance. Funk also said that their new Community Water, Sanitation and Hygiene (C-WASH) programme will complement agricultural programmes and help thousands of individuals to lead healthier and more productive lives.The programme is aiming to rehabilitate boreholes and create new wells in areas that desperately need access to clean and safe water.The programme also aims to construct latrines and providing training in good practices to facilitate better sanitation and hygiene.]]>