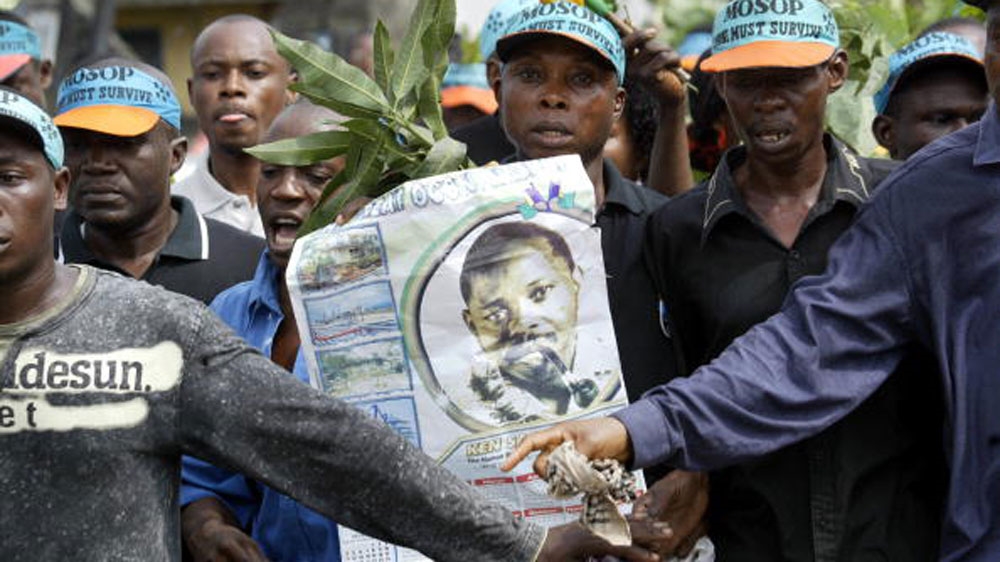 Twenty years ago I was privileged to be part of a blossoming pro-democracy movement in Nigeria that was opposing the military government.

As we called for a return to democracy after years of military rule, a fragilely built man was focusing on an issue other activists were neglecting. It concerned the control of natural resources in the Niger Delta, and in particular, the devastation caused by oil-producing companies in Ogoniland.

That man was Ken Saro-Wiwa and he changed and enriched the Nigerian cause for human rights and environmental protection.

In 1995, Nigeria was under the military rule of General Sani Abacha. He was the man behind the arrest of Saro-Wiwa, who by then had become an effective symbol of resistance against the oppression of minority groups.

He was also campaigning to give Nigeria’s people control of the country’s natural resources, which were being exploited by multinational companies with the government’s backing.

Saro-Wiwa and his Movement for the Survival of the Ogoni People (MOSOP) had adopted an effective non-violent campaign for environmental justice, social equality, a right for self-determination and control of Nigeria’s resources. The campaign also highlighted the environmental devastation caused not only in Ogoniland but the Niger Delta as a whole.

The oil produced in the Niger Delta accounted for much of Nigeria’s revenue, yet the region suffered extreme poverty and atrocious human rights abuses.

Saro-Wiwa and eight of his associates were arrested by the army in 1994 for allegedly masterminding the murders of four Ogoni chiefs who were on the side of the oil companies and the government.

By methodically documenting the environmental damage caused by the oil companies, Saro-Wiwa had mobilised local support for his cause while his non-violent, international campaign had targeted the multinationals.

As a result he became a perceived threat to both the oil companies operating in Nigeria and the corrupt Nigerian state.

Although we in the struggle felt the military dictatorship was brutal, we never imagined that Saro-Wiwa would be killed by the Nigerian state.

As well as being a renowned writer, playwright, internationally acclaimed activist and a popular TV producer nationwide, Saro-Wiwa had established good relations with senior military officers since Nigeria’s civil war.

After reading his memoirs of the war, On a Darkling Plain, it would be hard to name a senior officer with whom he did not have an amiable relationship. So, the idea that the military would execute Saro-Wiwa, came as a shock to most Nigerians.

When on November 10, 1995, the army announced that Saro-Wiwa and his comrades had been taken in chains to the gallows and hanged in Port-Harcourt – a city that he had written so much about and loved so dearly – activists in Nigeria and abroad were devastated. Knowing that he was innocent, his death threw the nation into mourning.

Rather than dousing the demands of justice for the Niger Delta, his death further exposed the shady activities of Nigerian administrations on both the federal and local levels.

Saro-Wiwa’s activism and his death inspired ethnic nationalities around the world to reflect on their own oppression, and he and the MOSOP became a template for such movements.


They identified with the MOSOP, and Saro-Wiwa and his martyred comrades became the symbols of resistance against Nigeria’s brutal dictatorship, and the multinationals that kept a corrupt government in power.

Those companies paid no respect to people’s rights, only sought profits through exploitation.

With the killing of Saro-Wiwa, the campaign for environmental justice and corporate social responsibility took an unprecedented turn – not just in Nigeria but across the world.

Also read: ‘We all stand before history’

Activists scrutinised how multinational companies treated their host communities and it became possible for ordinary people to rally together to demand their rights, to hold those multinationals and governments to account and to force them to cease their operations.

Saro-Wiwa’s legacy made it possible for Nigeria to have its first democratically elected president from the Niger Delta: the former president Goodluck Jonathan.

It also heralded fundamental changes in Nigeria, with the constitutional amendment that enabled 13 percent of the natural resource revenues to be shared with “oil-producing states” of the Niger Delta.

Saro-Wiwa has joined to the ranks of authors Wole Soyinka and Chinua Achebe and musician Fela Anikulapo-Kuti who have put Nigeria in the international spotlight.

Twenty years on, his Ogoni Bill of Rights remains a critical document for the restructuring of the Nigerian state, aiming to make it more just, less corrupt, while recognising personal rights and freedoms on an equal basis for all individuals.

The struggle and death of Saro-Wiwa and his comrades – as tragic as the incident was at that time – changed Nigeria and indeed the world in a fundamental and a positive way.

Kayode Ogundamisi is a commentator on Nigerian and international affairs. He was involved in the Nigerian pro-democracy struggle.

The post The legacy of a Nigerian human rights hero appeared first on African Media Agency.