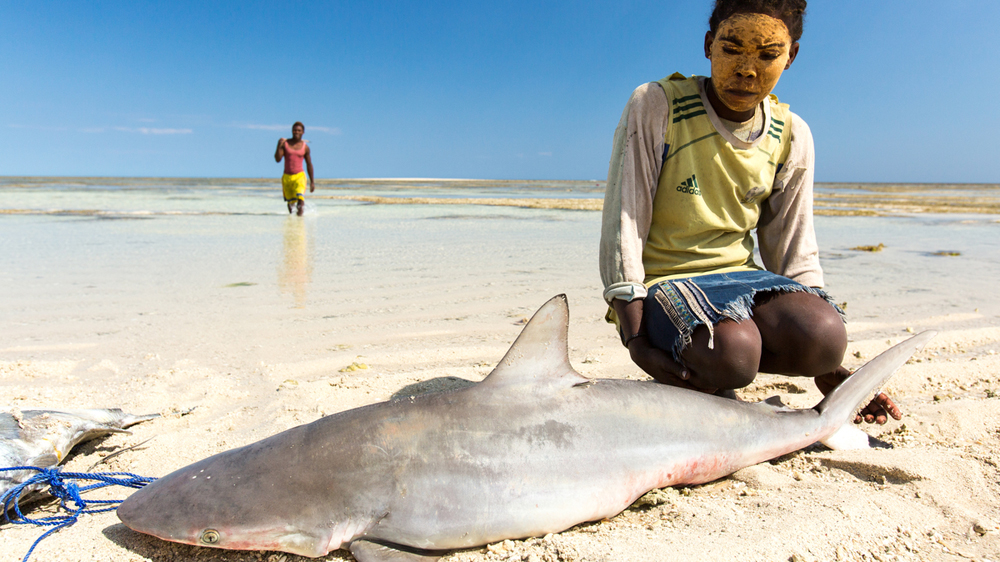 Nosy Andranambala, Madagascar – It’s 40 years this year since the first Jaws film came out. The Hollywood blockbuster and its sequels traumatised generations of cinema-goers with tales of vengeful predators stalking the shallows, baying for human blood.

But in the 1970s, around Madagascar – the world’s fourth-largest island – the waters were so full of sharks that parents really did have to tell their children that it wasn’t safe to go swimming.

“My dad used to say: ‘Don’t go far from the village because there are many sharks’,” remembers Lydia Lamy, who grew up in Andavadoaka, a village that is now home to roughly 3,500 people and is around an eight-hour drive from the south-western city of Toliara.

Lamy was so scared of being bitten that she would go swimming only at low tide.

‘Fish is the only currency’

Now, she lives 12km out to sea on the tiny, barren island of Nosy Andranambala, where a cluster of metre-high huts offer the only shade.

She allows her small children to cool off in the crashing navy-blue waters surrounding them, because times have changed since Lamy was a child. With around 100 million sharks killed every year, in Madagascar, people’s fears are now focused on the survival of the vanishing species.

“There were many sharks near here but they’ve all gone. You have to go far from the island to get them now, and only at night,” says Lamy, whose face is painted bright yellow with ground-up bark mixed with cream to protect it from the sun.

After tenderly patting the belly of the dead shark that her husband has brought in from pre-dawn fishing, she slices off the fins as the dry skin around it shines and crinkles like a cheap suit. Cutting open its belly reveals six pups that are so well formed at three months that they resemble bath toys.

Everyone knows that catching pregnant sharks is a bad idea, as they reproduce slowly, and there’s a policy of throwing back those found alive on lines or in nets. But on this barren island, which is “completely full” with its 160 inhabitants, this gesture would come at a high cost. This community is among the world’s most impoverished, and for them “fish is the only currency”.

Once Lamy has dried and salted the meat, the family will get 10,000 ariary, around $2.50, for this shark from collectors who come to the island and never negotiate on the price. The family’s monthly income is $20 to $50, depending on the luck of the nets and lines in waters that islanders say are rapidly emptying.

As another fisherman comes home, a hammerhead shark is gently flopped onto the sand. This species was added to the listing of the international legislation to prevent trade in endangered species (CITES) in 2013. But in a country like Madagascar, such listings are inapplicable at a state and local level.

“Most of the conventions signed at the international level are not enforced at national level,” explains Ambroise Brenier, who works for the Wildlife Conservation Society (WCS) in Madagascar.

Aime, who caught the hammerhead, and who, like many people in rural Madagascar, doesn’t have a surname, only knows that its fins are particularly prized.

These fibres give shark fin soup its texture. An Asian craze for this that took off in the 1980s led to the cruel practice of “finning” – cutting off sharks’ fins and throwing them back to drown.

Now there’s a global appetite for shark meat, and the European Union is a big buyer. It is common in “fish & chips” in Australia, often fleshes out crab sticks and is a delicacy in several European countries, such as France, where it is called veau de mer, or “veal of the sea”.

Sharks are also sought for liver oil and biomedical purposes.

This year, the WCS announced that Madagascar would get its first “shark park” in the country’s north-east, where a third of the 19 species of shark are endangered.

Some 25 communities surrounding Antongil Bay, a 1,446-square-mile breeding ground for sharks and humpback whales, have agreed to provide sanctuary for sharks coming to pup in the warm shallows.

These locally marine-managed areas (LMMAs) are vital in a country where the means and will to provide government manpower or fuel for the coastguards’ few boats are lacking.

“In Antongil Bay, if we want someone to enforce fishing regulations, we have to fly them from Tana (the capital, Antananarivo), which means that there is no surveillance going on,” says Brenier.

In Lamy’s childhood village of Andavadoaka, where British marine conservation organisation Blue Ventures has worked since 2003, many people don’t know who Madagascar’s president is. Some can’t name the last one, either.

It’s surprising, given that so many people are sporting T-shirts with the names and faces of past and present leaders emblazoned on them. But on an island where coups curtail presidential terms and people call politics “cinema”, elections “sacks of rice” and the idea of choosing your destiny “a prisoner’s dream”, it’s understandable.

More people fall victim to the plague in Madagascar, than any other country. Chronic malnutrition makes Malagasies the fifth most stunted people in the world. It is visible in the fishermen whose rippling, triangular torsos often dwarf their legs.

Further south, drought and underdevelopment sees children in clinics so often that “some mothers will their babies to die, to stop them suffering,” says a representative of one medical charity.

On the coast, the government’s dealings are sometimes visible to local fishermen, who spot the big foreign boats bobbing around the tuna-rich Mozambique channel.

Some are allowed a certain number of sharks as bycatch. Other industrial longliners are licensed to catch a quota of sharks, although catches go unchecked.

With the weakest enforcement capacity in the southern Indian Ocean, Madagascar is a prime target for fisheries wanting to net more than their agreed share with Illegal, Unreported or Unregulated (IUU) fishing.

Residents say that boats that are heard at night, or whose lights are seen from the shore, are out of sight by daybreak. Traditional fishers such as Francois, who use dug-out wooden canoes called pirogues, blame the longliners for sweeping up sharks in the deeps.

“So many sharks want to come here but they catch them and use so much bait that the shark follows it instead of coming near the shore,” he says.

Francois, whose bulging muscles, cackling laugh and twinkling eyes belie his sixtysomething years, still fishes as much as he did in his 20s.

Then, he’d sometimes catch sharks that were bigger than his boat. Getting them on the boat would involve filling it almost to sinking point, hauling the shark on and quickly bailing it out. If it was still too big, he’d have to slowly tow it home to his village of Lamboara, where the surrounding mangroves used to be “full up with sharks”, for everyone to feast on.

Now, no one shares their rare shark catches and fishers complain about the unfairness of not being able to compete with the industrial boats. But with just their sailboats, simple lines and nets, they have also stripped the shores of sharks.

“You’re probably looking at tens of thousands being pulled out of the water by traditional fisheries,” says Frances Humber, Blue Ventures’ shark specialist.

Determining who’s catching what, where, and why comes down to “a hodgepodge of studies”, says Humber. But this only gives “a snapshot” of the state of the world’s sharks, while the fin industry has really muddied the waters.

“They’ve got no way of monitoring where the fins come from. It’s just a big jumbled-up bag of fins.”

With a dearth of data, which is expensive to collect but could unmask the real death rate of a highly migratory species that is supposed to live for decades, Blue Ventures started working with communities to monitor their catches six years ago.

Eighteen months ago they moved to teaching fishers how to enter the data on smartphones, a tricky task for some whose calloused hands are numb from years of working gnarled nets.

The data shows that sharks are getting smaller and fewer, and that fishermen have to go further and wait for longer to catch the same amount.

Globally, it’s thought that around one third of shark and ray species worldwide are endangered. Here, fishermen reel off the names of those they don’t see any more, including tiger and white sharks.

There’s hope that this kind of open-source data collection can be shared to help communities to understand that the policemen of the sea, needed to keep other species in check, are disappearing, and for governments to realise that what is out of sight is not out of mind.

While ocean stocks are depleting, the billion or so fishers worldwide that rely on fish to live are rapidly increasing in developing countries.

On Nosy Andranambala, Lamy is one of six people who can read and write and dreams of sending her children to the school in Andavadoaka.

But on bad fishing days, she struggles to feed them more than once, and a $15 bag of rice never lasts the month. Finding the $3-per-person boat fare to the mainland, a three-hour sail in low winds, is impossible.

On an island where no one has anything left to do but fish, she is resigned to her children joining their father at sea, but worries about what, if anything, will be left to catch.