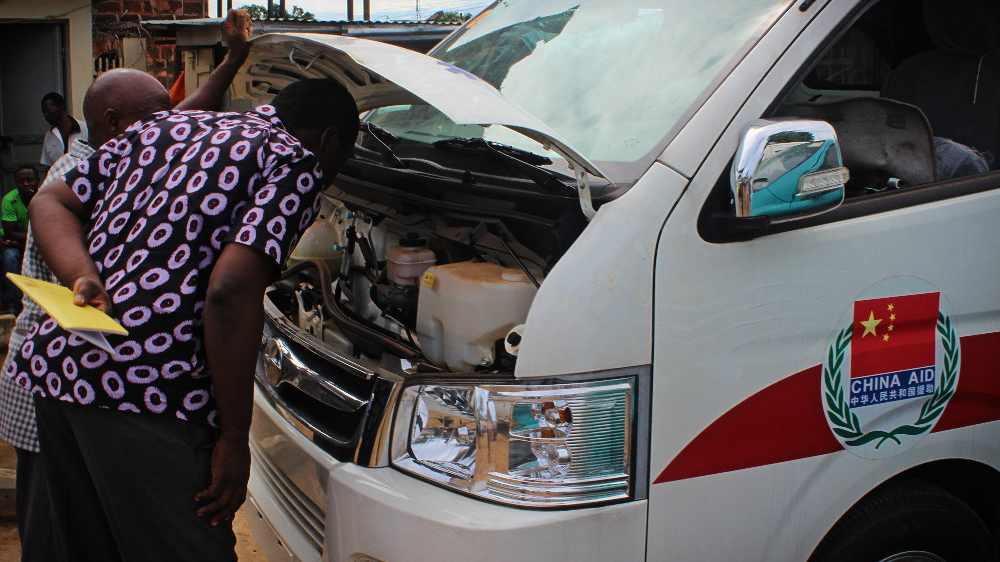 Freetown, Sierra Leone – Mariam Momoh was already unconscious when the taxi pulled up in front of her house. She was pregnant and had been vomiting all morning, unable to keep anything down. Her husband, Moinina, had tried calling for an ambulance, but gave up after several hours of being told that there wasn’t one available.

“It took us 40 minutes to get here. We only live four miles [6km] away,” he said, standing outside the Princess Christian Maternity Hospital in the capital, Freetown.

Mariam’s condition had been stabilised, but nurses said that had she arrived any later, neither she nor the child would have survived. Just three days before, another expectant mother had died on the way to the hospital after bleeding out in the back of a taxi as it was stuck in traffic.

But these kinds of tragedies don’t happen because of a lack of ambulances in the country. Governments around the world donated hundreds of ambulances to Sierra Leone in response to the Ebola epidemic. The country has also bought a significant number of vehicles in recent months. Yet, 90 government ambulances are gathering dust in a warehouse on the other side of town. Dozens more stand idle in car parks around the country.

Despite a massive influx of foreign aid in the 18 months since the start of the outbreak, many Sierra Leoneans have yet to benefit from some of the most crucial contributions made to their country’s fragile health system.

At the beginning of the outbreak, what few functional ambulances Sierra Leone had were turned over to containment efforts and regularly used to transport patients who were infected with the Ebola virus.

As the virus began to spread, experts say, other types of medical emergencies were virtually ignored by emergency services in the country.

Yet, although the World Health Organization (WHO) declared Sierra Leone Ebola-free on November 7, the ambulances donated to contain the outbreak are still only used to transport suspected cases of the disease.

The details of that plan are sparse, however. And while the bulk of the fleet waits in limbo, the ongoing shortage of active vehicles poses significant challenges for patients and those responsible for transporting them to safety.

“It really contributes to things like the maternal mortality rate,” explained Idrissa Barrie, a transport manager for the Bombali district health management team.

“We [usually] transport obstetrics cases from health outposts to referral hospitals. If we have an ambulance in good working order, within five minutes we can move to save lives. But if the ambulance isn’t here or isn’t working” the delay can result in the death of the patients, Barrie said.

RELATED: Sierra Leone is Ebola free, but a legacy of fear remains

According to 2013 WHO figures, Sierra Leone has the highest maternal mortality rate in the world, and things have only got worse. A recent study by VSO and the Liverpool School of Tropical Medicine showed a 30 percent increase in maternal deaths over the course of the outbreak. The number of infant fatalities rose by 24 percent.

One contributing factor to this steep increase was the endemic fear of medical facilities that arose with the Ebola epidemic. Hospitals and ambulances became synonymous with the virus, and many avoided treatment in an effort to protect themselves.

Another factor is the weak referral system and the country’s health infrastructure.

“If a pregnant woman is referred here, they have to take a motorbike, which is very dangerous, or be carried in a hammock if they don’t have access to a motorbike,” said Dr Peter Koneh, the head of the Hinistaas Community Health Center in rural Tonkolili.

According to Koneh, the government-sponsored clinic serves more than 20,000 people in the immediate vicinity and often acts as a referral point for the rest of the 84,500 people living in the chiefdom.

“We are a referral point, and yet we don’t have a referral ambulance,” said Koneh. “This is frustrating. No matter how good our service is here, if people cannot access it, they will die.”

Even the country’s most populous areas are struggling. The Freetown peninsula’s district health management team has only five functional ambulances to serve a population of roughly two million – that’s one ambulance per 400,000 people, according to the team’s transport manager, William Pessima.

Pessima said the area was “unique” in that it was “crowded and rugged, with more than two million people and mountainous areas far away from the DHM team”.

“Maintenance costs are huge, let alone the fuel costs, and that can mean we have less ambulances to send out,” he added.

Bureaucracy frequently holds up the distribution of vehicle maintenance funds. Barrie, the transportation manager, told Al Jazeera that his team in Bombali often did not receive requested funds for the first quarter of the year until halfway through the year.

Victor Koroma, the director of the civil society group, Health Alert, agreed that this was an issue and said the problem existed nationwide.

“We’ll go out to the districts and see an ambulance parked underneath a mango tree for just one simple tyre,” Koroma said.

“When you talk to the district medical officer, they’ll say: ‘No, the money for repairs are with the councils, and the councils have still not approved the purchase of the tyre.’ Then you’ll go to the councils, and they’ll say, ‘No, the DMO (District Medical Officer) has to request that money, and up until now, the DMO has not sent a request.’ And that ambulance will sit there for six months without anyone doing anything.”

There is a large disconnect between officials and lower-level health coordinators. Barrie said the three ambulances available to his team were not enough to meet the district’s referral needs and that they would need at least 14 ambulances, one per district chiefdom, to adequately serve their purpose.

Yusif Duyamba, the national transportation manager, laughed at the suggestion and said that each district health management team should not need more than two.

It is difficult to ascertain the precise number of ambulances the government acquired in addition to the donations it received. Even the government representatives Al Jazeera interviewed point the fingers of responsibility at each other.

Dr Kargbo, the chief medical officer, estimated that the ministry bought 123 in the past two months but insisted that exact figures were maintained by Duyamba.

The transportation manager, however, said that “over 100″ were purchased but it would be best to refer to Kargbo for the specific number. They are also at odds regarding the original source of the procurement funds and records of the purchase have yet to be filed with the auditor general’s office.

What procurement records have been submitted for auditing are ripe with irregularities, and auditors said this may have created avenues for fraud and misappropriation.

According to a live audit conducted from June 2014 to November 2014, no documents whatsoever were filed for the purchase of 30 ambulances and 20 utility vehicles, a deal valued at more than $2.3m. Further records documenting the procurement of an additional 30 used vehicles had the same price listed for each, despite being different makes and models of varying conditions.

The Ministry of Health and the Office of National Security will take over this fleet of vehicles on December 31 when, according to Kargbo, the ambulances will be sterilised and combined with those bought by the government to establish a national EMS system.

But few details of those plans have been shared with anyone outside the Ministry of Health. OP Sisay, the head of NERC’s situation room, is worried about the handover process.

“We want to be assured that we won’t be needed any more, that the institutions that are going to inherit the responsibilities that we currently discharge are fit, able and ready to do it,” Sisay told Al Jazeera.

Kargbo explained that the Ministry of Health was waiting for the new year to begin evaluating distribution needs, after which they would recruit the help of foreign agencies to build and manage the EMS system. They didn’t know the finer details, he insisted, because everything would be outsourced to whatever agencies they decide to partner with.

The ministry hopes to have structures in place by March 2016.

“As long as there is a delay, the problems will continue,” the doctor said. “But if we’re sincere, honest and transparent, a lot of things will change in Sierra Leone.”