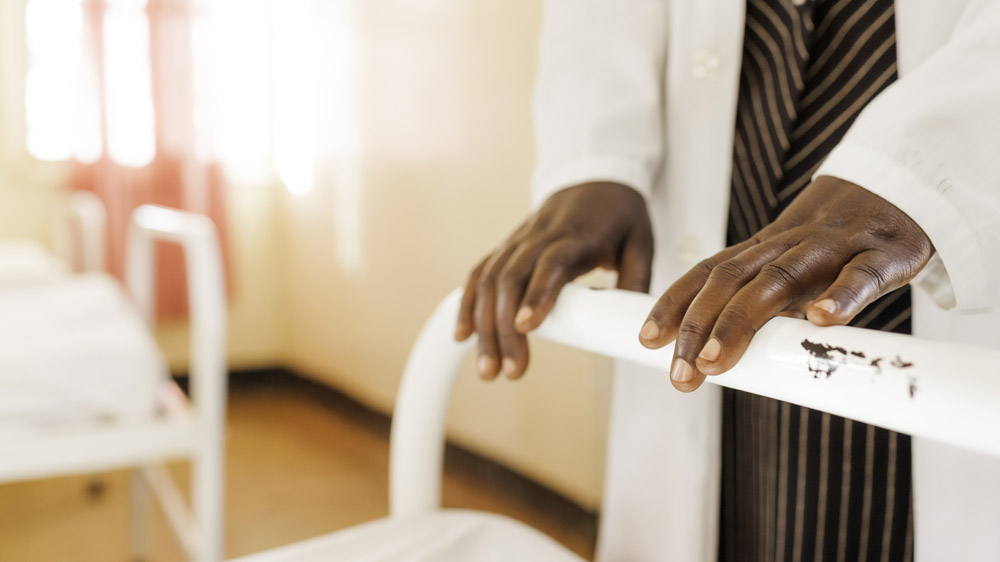 Dar es Salaam, Tanzania – In a small room in a dusty back street, Hamisi and 12 other male sex workers are preparing for a long night of work.

Just after dark, they stuff their pockets full of condoms and divvy up the nearby communities using markers and a hand-drawn map. From there, they head to the bars and alleyways across the city where men discreetly sell sex to other men.

But tonight, they are not selling sex. They are trying to get their peers to go to a government-run hospital for an HIV test – a hard sell in a country with a strong social stigma against homosexuality and lengthy jail sentences for men convicted of having sex with other men.

That has not stopped gay rights activists such as Hamisi from demanding change.

Hamisi and the other sex workers interviewed asked that their last names not be used to protect their identities. In a country where obtaining legal rights for gay people is not likely to happen soon, they are using a public health crisis to demand recognition.

Tanzania has the fourth-highest number of deaths from AIDS in the world, and the HIV infection rate among gay men is more than four times the national average – numbers even the most homophobic of governments have been hard-pressed to ignore.

Adam was shaking when he entered one of Dar es Salaam’s government hospitals with Hamisi the next day. Adam is an HIV-positive male sex worker, and before he met Hamisi, he could not have imagined coming to a state hospital for treatment.

“In the government hospitals, we face discrimination. Instead of treating us, they’ll call people over: ‘Come and see, we have a gay here.’ Then they’ll say, ‘We can’t treat you. Get out of here.’”

In the past, gay men have mostly relied on Dar es Salaam’s more expensive private clinics for treatment. But, Adam said, “for the MSM [men who have sex with men] who are poor, they can only afford to go to government hospitals”.

While gay men are rarely, if ever, prosecuted under the law in Tanzania, the social stigma it perpetuates can be deadly.

“People rape us, people kill us, people beat us because of our sexual orientation,” said Hamisi.

So Adam was shocked when Mary, a nurse at Magomeni Government Hospital, grabbed Hamisi’s hand, smiled warmly and led them to an examination room.

“I like working with them because we’re helping them,” said Mary, who regularly works with Hamisi to treat the male sex workers he brings to the hospital. “This job comes from my heart. I don’t like to see people suffering.”

Mary did not always feel this comfortable. But in 2011, she and her co-workers attended a training session run by Population Services International and Engender Health to learn how to better help gay men, as well as intravenous drug users and sex workers.

“The training answered so many of my questions,” said Mary. “You have to take care of them. They’re people like us.”

The training started because Tanzania’s once-successful national HIV/AIDS strategy had hit a wall. The government had no comprehensive plan for addressing the fact that groups most at risk for contracting HIV, including gay men, were often the least likely to receive services.

At the peak of the AIDS epidemic in the 1990s, nearly one in 10 Tanzanians were HIV-positive. With massive international aid – including $1.5bn in the past decade alone – the Tanzanian government developed aggressive public health policies that made sexual health information and antiretroviral drugs widely available.

But since 2007, the percentage of HIV-positive Tanzanians has declined only slightly down to five percent. Despite the widespread availability of treatment, many Tanzanians – especially gay men – are not receiving it.

“I would help men get tested, but because of the stigma and discrimination, they wouldn’t get treatment,” said Hamisi of his outreach efforts.

Joyce Nyonyi is a lecturer at the University of Dar es Salaam who researches the topic.

“The HIV infection rates amongst MSM is so much higher compared to the general population, so basically denying them access was counter-intuitive,” Nyonyi said.

This was where gay rights activists saw an opening. If their rights were framed in the context of the country’s HIV epidemic, the government would be compelled to acknowledge them.

“The area that they have done most of the organising around has been health and HIV, and the right to HIV services,” said Neela Ghoshal, a senior researcher with Human Rights Watch. “In fact, they have found that this is the easiest, and in some cases, one of the only ways to actually have a dialogue with the government and religious leaders.”

Given that many gay men in this conservative society have wives or girlfriends, fighting HIV has an urgency even to Tanzanians who do not support gay rights.

“People tend to see them as a very separate group, but being MSM does not mean that you don’t have female partners. Many of them do,” said Nyonyi. “You can’t say it’s their problem, they’ll deal with it.”

In 2013, TACAIDS, the government organisation that coordinates Tanzania’s HIV/AIDS response, included men who have sex with men in its national HIV strategy. The organisation noted that HIV prevalence among this group is disproportionately high, and along with drug users and sex workers, men who have sex with men “are in evident need of enhanced access to HIV prevention, treatment, and other healthcare services”.

Nyonyi said the changes have indeed been significant. “There is support from the government now. The Ministry of Health has supported us quite a lot, and they’re using our findings to formulate better policies around services for MSM.”

TACAIDS also made a study on HIV and gay men in Tanzania available on its website.

Nevertheless, this shift has not led to radical changes in how gay men in Tanzania are treated.

“Changing the legal framework [criminalising homosexuality] – it will probably be a long time until that is done,” said Nyonyi.

Tanzanian officials have vowed to maintain these laws, despite threats of international aid cuts.

While gay men may be safer inside the hospital walls, that protection often ends as soon as they are on the street. Even Mary the nurse has had neighbours threaten her because of her work.

But for Adam, even incremental change can be momentous.

“Considering the distance we’ve come from this is some kind of improvement,” said Adam as he walked out of the clinic, “there are some health providers we can trust.”