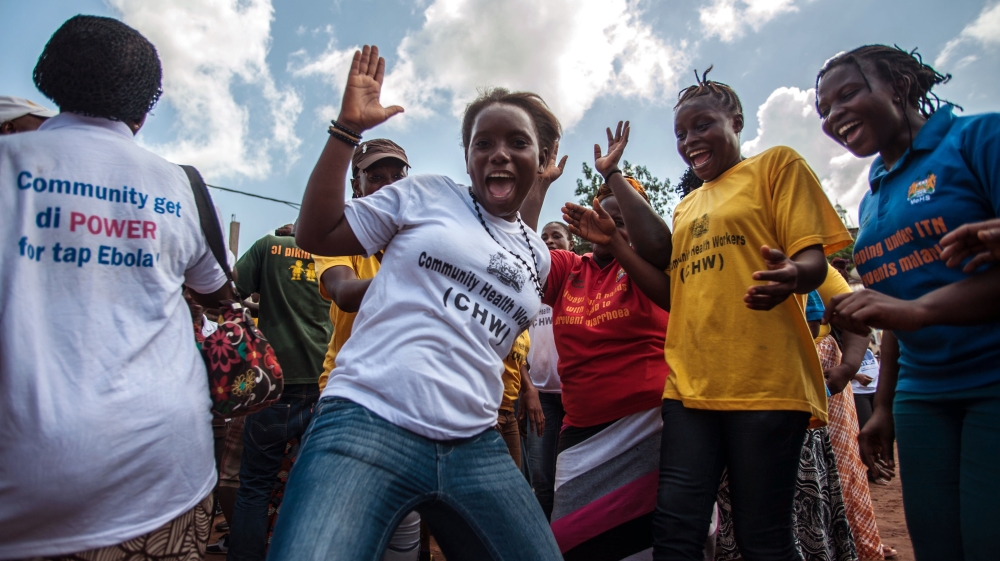 Residents of Sierra Leone’s capital have celebrated the end of an Ebola epidemic that has killed almost 4,000 people since it began last year.

Following 42 days with no new cases, the West African nation’s epidemic was declared over on Saturday at a ceremony attended by President Ernest Bai Koroma and United Nations World Health Organization (WHO) representative Anders Nordstrom.

In a party-like atmosphere, thousands of people danced in the streets of Freetown to mark the occasion.

Earlier, thousands of people gathered overnight around the Cotton Tree, a massive tree in the centre of the capital for a candlelit vigil organised by women’s groups to pay tribute to health workers who lost their lives.

“They died so we could live,” university student Fatmata told the Reuters news agency, with tears in her eyes. Many of the 220 health workers who died were infected due to inadequate protective equipment and training.

The country’s first confirmed Ebola survivor, Victoria Yillia, told the crowd she was “happy that this disease which almost killed me has finally ended”.

She appealed to authorities not to forget survivors, many of whom have faced social stigma and persistent health problems.

Elsewhere in the city, residents celebrated the end of the epidemic, which forced schools to close, overwhelmed healthcare systems and hurt the local economy.

It was not a celebration for everyone, however.

Daddy Hassan Kamara, who lost nine of his family members, including his mother and children, told Al Jazeera that he was still in mourning.

“This brings my mind back to what I have gone through. This day is a painful one for me,” he said.

Ebola has killed more than 11,300 people in Sierra Leone, Liberia and Guinea since the epidemic was announced in March 2014 and about 28,500 were infected, according to WHO data. Sierra Leone’s death toll was 3,955 people.

Liberia was declared free of Ebola on September 3, while a handful of cases remain in Guinea.

The 42-day countdown to be declared Ebola-free starts when the last patient tests negative a second time, normally after a 48-hour gap following their first negative test.

The country now enters a 90-day period of surveillance with support from the WHO, which said the monitoring phase was critical to ensure early detection of any possible new cases.