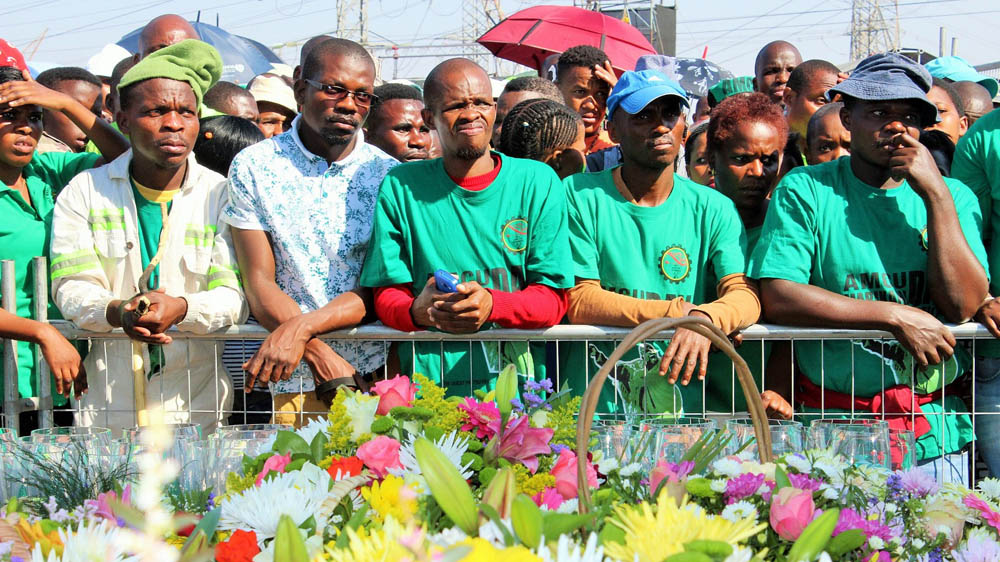 South African Broadcasting Corporation (SABC) have been urged by activisits and the civil society to broadcast a documentary depicting the Marikana massacre of 2012 on public television.

At least 44 people were killed during strikes at the Lonmin Plantinum mines in the Northwest province in South Africa.

Thirty-four were murdered on a single day when police opened fire on striking miners in the most brutal police operation in the country since the end of apartheid.

The film continues to draw plaudits from the across the globe. Since being released in 2014, ‘Miners Shot Down’ has won 21 awards, including five South African awards. It won an Emmy for best documentary at a ceremony in New York City on Monday night.

The filmmaker Rehad Desai described the recognition as an “overwhelming vote of confidence in the truthfulness of the narrative that we have presented”.

“We can only have hope that this [award] will further encourage the SABC to have the courage to finally show the film,” Desai told Al Jazeera after the Emmy awards ceremony.

But it is yet to be screened by the public broadcaster SABC or the free-to-air channel eTV.

Busi Mtabane, communicator at the Right2Know campaign, told Al Jazeera that SABC were puposefully blocking the majority of South Africans from watching the film.

“Let the truth be known, let people watch the film so they might know what happened for themselves,” Mtabane said.

But Kaizer Kganyago, SABC’s spokesperson, said that the organisation had not refused to broadcast the documentary at any point.

“On May 24 this year, the corporation communicated in an email directly to the producer and filmmaker, Mr Rehad Desai that could not consider broadcasting the documentary as the Marikina commission was in process at that time,” Kganyago said.

“It was communicated that once the commission processes have been finalised, and with the availability of the documentary slots, Mr. Desai and the SABC can take the discussion further.”

The Marikana Commission of Enquiry was released by President Jacob Zuma this June.

Key political figures, including current vice-president Cyril Ramaphosa, were largely exonerated for playing a leading role in the events that led to the massacre, leading to wave of condemnation of the report.

Desai added that the film was caught up in the politics of contetsation over control of the SABC, alleging that the ruling-party was blocking the screening of the film.

It is a claim the SABC has vehemently denied.

“We are not aware of the ruling party’s position to block the documentary,” Kganyano said.

‘Never heard of the film’

Responding to the allegations, Zizi Kodwa, spokesperson for the ANC, told Al Jazeera that he had “never heard of the film”.

“Tell Rehad Desai to tell the ANC directly that we are blocking it,” Kodwa said.

Kodwa later issued a statement on behalf of the ANC, congratulating the filmmakers on their award.

“This is a key component of building a united nation, learning from its past and charting an even more progressive future characterised by social cohesion and inclusion,” the statement read.

“The ANC extends its compliments to all cast members of the documentary for their hard work and determination which resulted to this achievement.”

Almost 5,000 people have signed a petition urging the SABC and eTV to show the film. On Tuesday, the Democratic Alliance (DA) said it would raise the matter in a parliamentary session with communications minister Faith Muthambi.

In an editorial on Wednesday, The Daily Maverick urged the SABC and eTV to screen the film, arguing that the decision to keep it off the screens appeared politically motivated.

“It’s easier to ignore a documentary critical of politicians, police and business than air it and deal with the ramifications,” the online media platform said.