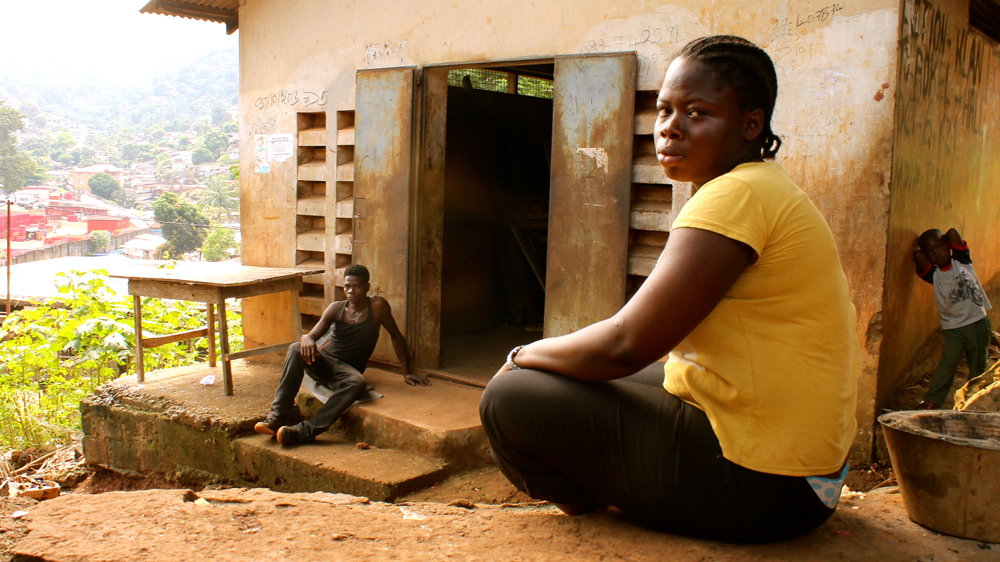 Twenty-nine-year-old Song strolls through the streets of Sierra Leone’s capital, Freetown, as loud music blares out from the stalls of street vendors.

After 42 days with no new cases, the World Health Organization on Saturday officially declared Sierra Leone free from Ebola.

“This time last year we were putting thousands of people in body bags, people were scared, unable to go out. Today we are free,” he explains.

I’m in Freetown this week with WaterAid, which has been working in hygiene promotion and assisting on crucial water and sanitation projects in Liberia and Sierra Leone as these countries try to rebuild their health systems after the Ebola crisis.

Here in chaotic Freetown, reminders of this deadly virus linger everywhere. Roadside billboards remind residents to stay vigilant, and guards at security checkpoints are armed with thermometers and bottles of hand sanitiser.

Just outside of Freetown, in the suburb of Waterloo, lies Ebola’s Ground Zero – a cemetery filled with those who have died from the virus. The grave of a 99-year-old woman sits beside that of a three-year-old boy – a stark reminder that this deadly virus did not discriminate.

In the distance, another burial team makes its way down the bumpy dirt track. A man wearing protective gear jumps out. “We have four bodies in here, two of them children,” he shouts.

But these are not bodies destined for the Ebola cemetery; the cemetery guard directs them to another one, a few hundred metres away, reserved for those who have died from other causes.

A young mother arrives for the burial service, tears streaming down her face. She explains that her two-year-old daughter Nancy contracted an infection and passed away a few days ago. Nancy is to be buried in the children’s cemetery, next to hundreds of other tiny graves on the rain-soaked hillside.

These children did not die from Ebola but from other, mainly preventable, causes; causes which Sierra Leone has been fighting since long before the outbreak of Ebola. More than 4,500 children under age five in Sierra Leone, are estimated to have died in 2013 of diarrhoeal illnesses, which are common in a country where nearly 87 percent of the population do not have access to a safe, private toilet and more than 37 percent do not have access to clean water.

What is most shocking is the number of graves of babies under a month old.

Even before the Ebola outbreak, Sierra Leone was one of the most dangerous places in the world for a mother to give birth. On average, one woman in every 21 here will lose a child to infection in its first month of life. The equivalent risk in the UK, for example, is one woman in 7,518.

The Ebola outbreak has only made this alarming statistic worse. New research by VSO and WaterAid found that during the crisis there was a 30 percent increase in maternal deaths and a 24 percent increase in newborn deaths. With the healthcare system crippled by Ebola, many mothers were too afraid to go to hospital to give birth.

Seventeen-year-old Musu Monsoray was one of them.

“I didn’t go to hospital for any checkups when I was pregnant, as I was too scared of catching Ebola,” she explains. “I only managed to see the midwife twice, and was planning on giving birth at home.”

Musu lives in a tiny hut in Freetown’s New England Ville neighbourhood. As in many homes here, there is no access to safe water and the toilet is in the same place as the kitchen, making good hygiene difficult. When she went into labour, she explains, she waited until the last minute before being rushed to hospital by a neighbour. Her baby was stillborn.

It is impossible to say for sure what caused Musu’s baby to die. But we know that women whose growth and development in childhood were stunted by chronic diarrhoea, caused by dirty water and poor sanitation and hygiene, are more likely to have complications in pregnancy, including obstructed labour. Women who are ill during their pregnancies are also more susceptible to complications, and infections can set in during long labours if women are giving birth in unhygienic conditions, assisted by midwives who are unable to properly wash their hands.

“If Ebola was not here maybe things would have been different,” Musu says. “I would have gone for regular checkups. Instead my baby died.”

‘A place for the dead’

There is still a huge legacy of fear surrounding the healthcare system in Sierra Leone, with many mothers reluctant to go to hospital.

“At the height of the Ebola outbreak hospitals were seen as a place for the dead,” says Dr Amadu Sesay, the medical superintendent at Kingharman Road Government hospital.

“Going forward we have to rebuild confidence in the healthcare system in Sierra Leone, especially with regards to maternal health.”

“Having access to clean water, good sanitation and hygiene practices is pivotal in bringing mothers back [to our hospitals]. You cannot have infection prevention where you lack water supply. Ebola taught us that, and the government must recognise that too.”

Next door, a woman in labour lets out a scream. Sesay goes to tend to her. Minutes later, a baby girl is born. Both mother and baby are in good health. But for baby Sarah the next 28 days of her life will be her most vulnerable.

For Sierra Leone to move past the Ebola outbreak and give newborn children a fighting chance at life, ‘clean’ must be put at the heart of healthcare. Hospitals must have access to water, sanitation, and everything they need to maintain high levels of hygiene. The lives of Sarah and so many others depend upon it.

The post Sierra Leone is Ebola free but a legacy of fear remains appeared first on African Media Agency.