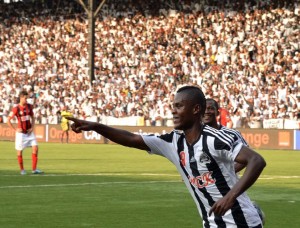 Leading 2-1 from the first leg in Algeria last weekend, the Democratic Republic of Congo club triumphed 4-1 on aggregate to qualify for the 2015 FIFA Club World Cup in Japan, where the likes of Barcelona and River Plate are potential opponents.

Ivorian Assale doubled the second-leg lead four minutes into stoppage time by tapping in from close range after Samatta spearheaded a counterattack.

By winning the premier African club competition for a fifth time, Mazembe join Zamalek of Egypt as the second most successful sides behind eight-time champions Al Ahly of Egypt.

Mazembe are only the third club in 50 two-leg Champions League (formerly African Cup of Champions Clubs) finals after Hafia of Guinea and Hearts of Oak of Ghana to win both home and away.

Goalkeepers Muteba Kidiaba of Mazembe and Ismail Mansouri of USM were virtual spectators during the opening half of a match staged on an artificial surface.

The introduction of Assale and Ghanaian Daniel Nii Adjei for the second half bolstered the Mazembe attack and Malian Adama Traore shot wide from close range just past the hour.

But persistent pressure from the home team produced two goals and a first CAF title for French coach Patrice Carteron after near misses in the past two seasons.

Mazembe finished runners-up to CS Sfaxien of Tunisia in the 2013 CAF Confederation Cup final and a couple of Kidiaba blunders robbed them of a Champions League final place last year.

Former Saint-Etienne defender Carteron had built up USM as a side to fear in the return match because “they have nothing to lose”.

But his concerns proved unfounded as the Algiers outfit, showing six changes from the first leg due to suspensions and injuries, offered little going forward.

They finished the match a man short as 2015 CAF Africa-based Footballer of the Year nominee Zinedine Ferhat was red-carded after the second goal for striking an opponent.

Ivorian, Ghanaian and Congolese substitutes added to the multi-national flavour of Mazembe, whose previous African titles were won in 1967, 1968, 2009 and 2010.

The ‘Ravens’ have also been runners-up twice.

Mazembe will relish another Club World Cup appearance as they became the first African finalists in 2010, shocking Internacional of Brazil in the semi-finals before losing to Inter Milan.