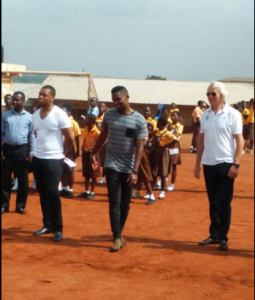 A FIFA delegation led by FIFA Chief Medical Officer Prof. Jiří Dvořák and supported by Cameroonian superstar Samuel Eto’o has just completed a visit to Sierra Leone and Ghana to experience first-hand the progress of FIFA’s health campaigns. One year after the emergency campaign “11 against Ebola” was launched in West Africa at the peak of the Ebola epidemic, FIFA is now introducing its longer-term health promotion campaign, “FIFA 11 for Health”, in Sierra Leone. The timing of the visit could not have been more symbolic with only three days to go until the World Health Organization (WHO) officially declares Sierra Leone Ebola‑free on 6 November 2015. Known for his social engagement and strong commitment to the African continent, Samuel Eto’o took the opportunity during his visit to Sierra Leone and Ghana to interact with vulnerable communities, especially children affected by the Ebola epidemic. As well as visiting the Grafton orphanage in Freetown, which takes care of very young children who have lost their entire families to the Ebola virus, Eto’o also went in to local schools in Sierra Leone and Ghana to communicate and promote the “FIFA 11 for Health” messages. 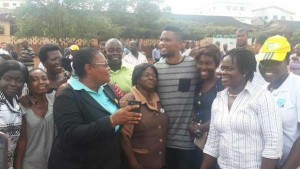 The four-time African footballer of the year was one of the first players to support the “FIFA 11 for Health” programme , which harnesses the power of football and scientific research to inspire girls and boys to lead healthy lifestyles. The programme seeks to improve children’s knowledge, attitudes and behaviour around vital health issues such as HIV, TB, malaria, diabetes, obesity and hypertension. It has been a success in more than 20 countries around the world since its introduction ahead of the 2010 FIFA World Cup South Africa™. After visiting several health projects in Freetown and Accra, Samuel Eto’o said: “I’m excited to be home in Africa and proud to see what my brothers in Sierra Leone have achieved in successfully fighting against the Ebola virus. Health is the most important thing in life, with health and a strong dream you can achieve anything in life. Football has an important role to play in educating young girls and boys to live a healthy lifestyle.” *FIFA/APO]]>