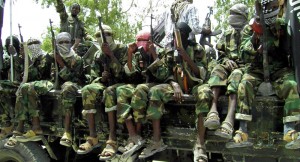 The U.S. Department of State’s Rewards for Justice program is offering rewards for information leading to the identification or location of six key leaders of the Somalia-based terrorist organization al-Shabaab. The U.S. Secretary of State has authorized rewards of up to $6 million for information on the whereabouts of Abu Ubaidah (Direye), up to $5 million each for information on Mahad Karate, Ma’alim Daud, and Hassan Afgooye, and up to $3 million each for information on Maalim Salman and Ahmed Iman Ali. Since 2006, al-Shabaab has killed thousands of civilians, aid workers, and peacekeepers in Somalia, Uganda, and Kenya. Al-Shabaab claimed responsibility for the July 11, 2010, suicide bombings in Kampala, Uganda, which killed more than 70 people, including one American citizen. Al-Shabaab also claimed responsibility for the September 21-24, 2013, terrorist attack against the Westgate shopping mall in Nairobi, which left more than 60 people dead and nearly 200 wounded and the April 2 attack on Garrissa University College in Kenya, which resulted in 150 deaths. The U.S. Secretary of State designated al-Shabaab a Foreign Terrorist Organization on March 18, 2008. In February 2012, al-Shabaab and the al-Qaida terrorist network jointly announced they had formed an alliance. Abu Ubaidah, also known as Direye, was named the leader of al-Shabaab on September 6, 2014, after the death of former al- Shabaab emir Ahmed Abdi aw-Mohamed (a.k.a. Godane). Mahad Karate, also known as Abdirahman Mohamed Warsame has played a key role in the wing of al-Shabaab responsible for assassinations and the April 2 attack on Garissa University College. Ma’alim Daud is responsible for al-Shabaab’s planning, recruitment, training, and operations against the government of Somalia and Western targets. Hassan Afgooye oversees a complex financial network whose activities range from fake charities, and fundraising to racketeering and kidnapping in support of al-Shabaab’s activities. Maalim Salman leads al-Shabaab’s African foreign terrorist fighters and has been involved in operations in Africa targeting tourists, entertainment establishments, and churches. Ahmed Iman Ali has recruited Kenyan youth and raised funds for al-Shabaab. More information about these individuals is located on the Rewards for Justice website at www.rewardsforjustice.net. We encourage anyone with information on these individuals to contact Rewards for Justice via the website, e-mail (info@rewardsforjustice.net), phone (1-800-877-3927), or mail (Rewards for Justice, Washington, D.C., 20520-0303, USA). All information will be kept strictly confidential. Rewards for Justice is administered by the U.S. Department of State’s Bureau of Diplomatic Security. Since its inception in 1984, the program has paid in excess of $125 million to more than 80 individuals who provided actionable information that put terrorists behind bars or prevented acts of international terrorism worldwide. Follow us on Twitter at @Rewards4Justice. *State Department]]>