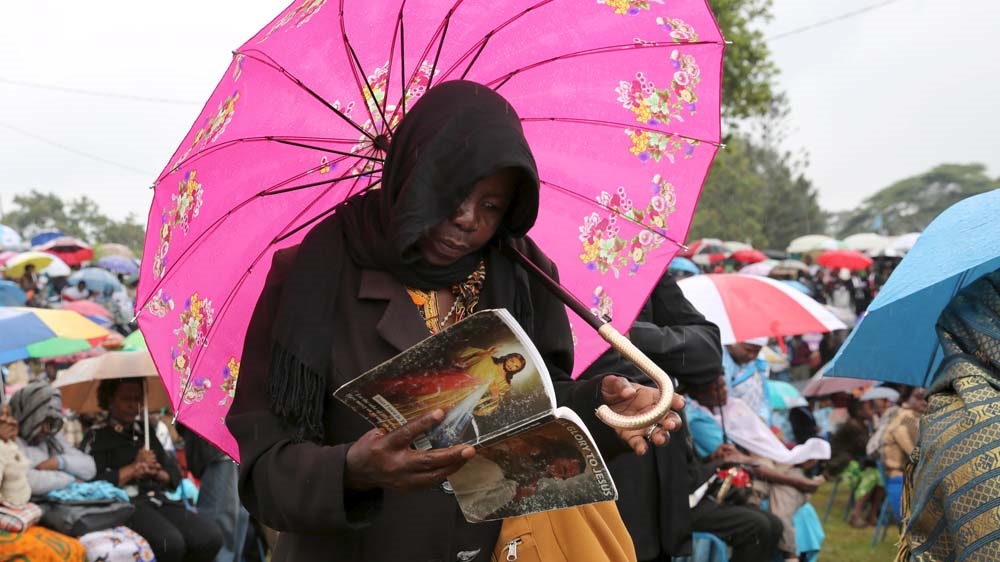 Nairobi, Kenya – A sea of umbrellas rose up the jagged hillside, sheltering thousands of Kenyans who had braved torrential rain to hear Pope Francis address the nation on the first stop of his Africa tour.

Among his first words were a counsel not to “hurt or demean women” or to “threaten the life of the innocent unborn”. Together, they struck at the heart of what some Kenyan women’s rights activists believe to be a contradiction with sometimes deadly consequences in this country where more than 20 percent of the population is Catholic and the leading cause of maternal deaths is unsafe abortion, according to the Kenyan Ministry of Health.

“We like to call ourselves a Christian country and that ends up meaning we don’t want to respect people’s voices. We want to mix religion with obstetrics and gynaecology,” said Dr Carol Odulla, a reproductive health specialist in Kenya.

In 2012, according to the Kenyan Ministry of Health report, 157,762 Kenyan women received care for complications resulting from induced and spontaneous abortions, 37 percent of them from severe complications such as sepsis, shock, or organ failure.

Pope Francis has been lauded for his liberal views on climate change and poverty. In Kenya, he turned down a lavish state dinner to dine in Kangemi, one of Nairobi’s slums. But he has stood by the Catholic Church’s vehement opposition to abortion, birth control, and condoms.

In 2010, Kenya promulgated a new constitution to great fanfare and great controversy. It liberalised Kenya’s near complete ban on abortion, stating that abortion was legal when “in the opinion of a trained health professional, there is need for emergency treatment, or the life or health of the mother is in danger, or if permitted by any other written law”.

It was considered a huge triumph for women’s rights activists in Kenya.

“This is trying to save the lives of women and girls because we came to discover that a lot of women and girls used to go to quacks to perform abortions,” said Geoffrey Maina, who works to sensitise religious leaders to reproductive rights in Kenya. Many of them disagree with his stance.

“They say people will take advantage of it, people will misbehave and then get pregnant because they can just get an abortion legally,” said Maina.

That resistance has made implementation difficult.

Kenya’s director of medical services withdrew the government’s guidelines for preventing maternal deaths from unsafe abortion and banned safe abortion training for healthcare professionals. Many believe that was partially as a result of influence from powerful Kenyan churches.

“The fact of the matter is this: we have a constitution that has set out grounds for when abortion can be accessed by women but we have seen, more and more, the Church trying to limit those grounds,” said Evelyne Opondo, the regional director for Africa at the Center for Reproductive Rights.

This leaves the medical community in a legal limbo: doctors aren’t receiving training on abortion care and are unsure of whether they will be prosecuted for providing it.

“What are we supposed to do? Not teach health providers how to a treat a woman who is losing a pregnancy, who is losing her life?” said Odulla. “What you’re doing is mopping the floors while the tap is still running.”

While abortion is the most contentious of these issues, the Catholic Church’s opposition to birth control and condoms is no less salient.

Kenya has the fourth-largest HIV epidemic in the world. More than 70 percent of women seeking post-abortion care in Kenya were not using contraception and 43 percent of births in Kenya were reported as unwanted or mistimed.

Kenya has experienced considerable success in lowering birth rates (declining from 8.1 children per woman in the late 1970s to 4.7 in the late 1990s) because of an increased acceptance of contraception. But that number has stagnated since then, with birth rates sticking stubbornly at 4.6.

“Imagine in the villages, someone who can’t even put food on the table and they have more than 10 children,” said Norah Otondo, a farmer in western Kenya.

Otondo is religious but feels that the pope is out of touch with the realities of poor Kenyans. She believes that condoms and birth control should be reserved for after marriage, but finds a complete ban hard to accept.

“If people can control the number of children they can make people’s lives better. If they can have only three who they can feed and educate that would eliminate poverty and illiteracy, otherwise we’re continuing the cycle of poverty,” she said.

Earlier in the year, Pope Francis said “God gives you methods to be responsible,” referring to church-sanctioned methods of birth control such as the rhythm method. “Some think that – excuse the word – that in order to be good Catholics we have to be like rabbits. No.’”

RELATED: Life at any price

In June, The Center for Reproductive Rights filed a case against the attorney general, the Ministry of Health and the director of medical services for undermining women’s constitutional rights and contributing to maternal mortality by denying women access to safe, legal abortion.

“I’ve seen a woman die right in front of my eyes because of sepsis. She was so quiet and she couldn’t talk to anybody and she was rotting inside,” said Odulla.

Odulla doesn’t really think religion has anything to do with it.

“I really believe in this pope, I am a Catholic,” she said as she finished watching him land in Kenya on television.

“[But] when you try to bring in your personal values and don’t link them to the bigger picture it creates problems.”