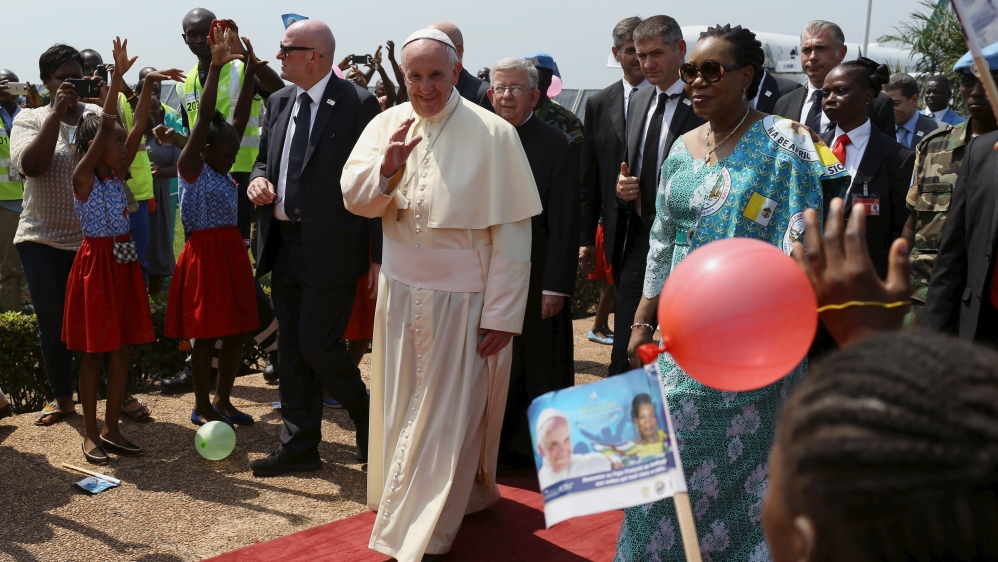 Pope Francis has made a visit to a communally sensitive neighbourhood in the capital of the Central African Republic, urging the Muslim and Christian communities to set aside their differences and focus on rebuilding relations.

Francis visited on Monday the central Koudoukou mosque in the besieged Bangui district of PK5, an area that has seen some of the most horrific Christian-Muslim violence since the coup of March 2013.

He described Christians and Muslims as brothers, urging them to reject hatred and move towards a path of reconciliation.

“Christians and Muslims are brothers and sisters … those who claim to believe in God must also be men and women of peace,” he said.

“Together, we must say no to hatred, to revenge and to violence, particularly that violence which is perpetrated in the name of a religion or of God himself. God is peace, salam.”

PK5 has been cut off from the rest of Bangui for the past two months by a ring of anti-Balaka Christian fighters, who block supplies from entering and Muslims from leaving.

A series of reprisal attacks in and around the tiny PK5 enclave have claimed at least 100 lives since late September, according to Human Rights Watch.

Leaders from both sides say the hate has been manipulated for political gain.

Addressing residents crowded into the mosque, Francis said his visit to the Central African Republic “would not be complete if it did not include this encounter with the Muslim community.”

Healing rifts between Christian and Muslim communities has been a theme throughout Francis’ first visit to the continent, which has also taken him to Kenya and Uganda.

However, nowhere is his call for peace and reconciliation more pressing than in Central African Republic, where thousands have died and hundreds of thousands have been displaced in clashes that have split the country along religious lines.

Imam Tidiani Moussa Naibi, one of the Muslim leaders trying to foster dialogue, has previously called PK5 “an open-air prison”, but on Monday he struck a optimistic tone.

“The relationship between our Christian brothers and sisters and ourselves is so deep that no manoeuvre seeking to undermine it will succeed,” he told the pope.

“The Christians and Muslims of this country are obliged to live together and love each other.”

Both the Christian majority and the minority Muslims have welcomed the pope’s visit, hoping he can spur renewed dialogue and help restore peace. Thousands of PK5’s Muslims lined the road into the enclave to get a glimpse of the pontiff.

Central African Republic’s United Nations peacekeeping mission brought in additional forces and has deployed over 3,000 soldiers in an attempt to secure the city during the pope’s visit. The government also contributed around 500 police officers.

Pope Francis ends his central and east Africa tour with a Mass for tens of thousands of Catholics at the country’s national stadium before returning to Rome.