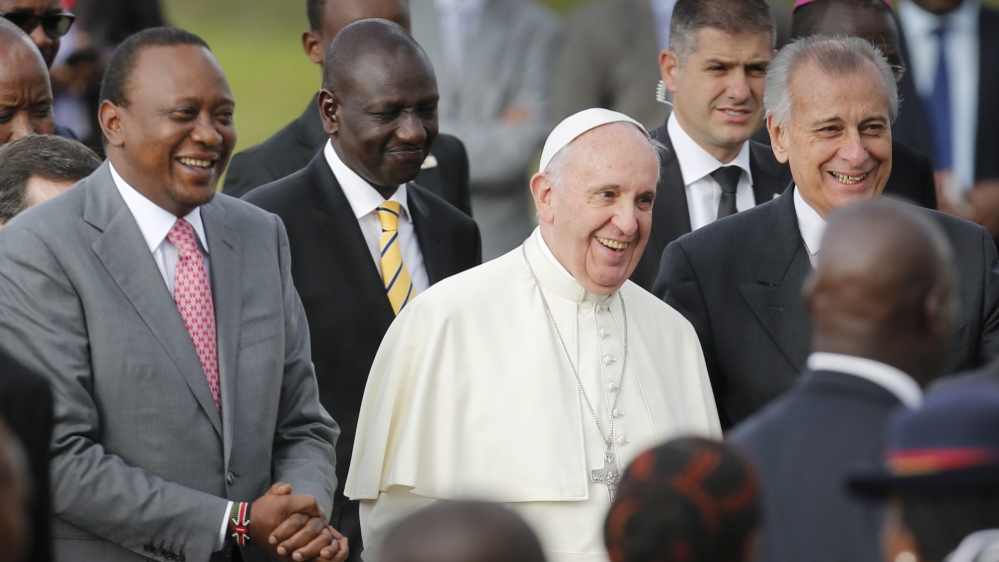 Pope Francis has called for ethnic and religious reconciliation after arriving in the Kenyan capital, Nairobi, at the start of his landmark three-nation Africa trip.

In what is his first official trip to the continent, the pope called all Kenyans on Wednesday to work for peace and forgiveness and warned of the need to address poverty as a key driver of conflict.

“Experience shows that violence, conflict and terrorism feed on fear, mistrust, and the despair born of poverty and frustration,” Francis said in Nairobi.

“To the extent that our societies experience divisions, whether ethnic, religious or economic, all men and women of good will are called to work for reconciliation and peace, forgiveness and healing,” he added.

“Ultimately, the struggle against these enemies of peace and prosperity must be carried on by men and women who fearlessly believe in, and bear honest witness to, the great spiritual and political values which inspired the birth of the nation.”

Kenyan President Uhuru Kenyatta and a group of traditional dancers and singers welcomed Francis upon arrival at Nairobi’s airport, at the beginning of a six-day tour that will also take him to Uganda and the Central African Republic, a country hit by ongoing Muslim-Christian violence and instability.

Al Jazeera’s Catherine Soi, reporting from Nairobi, said there were high expectations for the pontiff’s visit.

“A lot of people are saying [that this is] his most interesting trip yet, especially that trip to CAR where there is ongoing conflict between Muslim and Christian groups.”

Soi said the pope is expected to meet religious leaders from all faiths to talk about the need for religious tolerance and unity in Kenya, but added that many in the country are also interested in hearing his thoughts about governance.

“There’s corruption in the country, and if you talk to many people they will say corruption in Kenya is at a critical level. The president himself addressed the nation on Monday and declared corruption as a threat to national security, so people are keen to hear what the pope has to say about corruption and governance,” she said

“We don’t expect him to be very specific on national issues and politics but people want to hear him set the tone and give his guidance.”

In a speech delivered at the State House shortly after his arrival, Francis also urged world leaders to protect the environment for future generations and pursue responsible economic development.

“The grave environmental crisis facing our world demands an ever greater sensitivity to the relationship between human beings and nature,” said the pope, who went on and planted a tree on the State House grounds.

“We have a responsibility to pass on the beauty of nature in its integrity to the future generations.”